(CNSNews.com) – Secretary of State Mike Pompeo will be addressing the Republican National Convention this week “in his personal capacity,” according to the State Department, but the decision to do so while on a visit to Israel has upset some Jewish Democrats, who see it as a ploy to politicize the U.S.-Israel relationship.

Pompeo arrived in Israel early Monday, at the start of a five-day trip that will also take him to the United Arab Emirates and two other Arab countries – Bahrain and Sudan – that are predicted to follow the UAE in its recent historic decision to normalize ties with Israel.

In an unusual move, Pompeo is among the keynote speakers for the second night of the RNC, Tuesday. (He is listed as “The Honorable Michael Pompeo” rather than Secretary of State.)

In a Sunday evening tweet on his personal account, he wrote, “Looking forward to sharing with you how my family is more SAFE and more SECURE because of President Trump. See you all on Tuesday night!”

In an appearance on CBS’ “Face the Nation,” RNC Chairwoman Ronna McDaniel was asked about Pompeo’s involvement.

“This lineup, when you start hearing about cabinet members being involved – I mean, first of all, it’s very unusual for a diplomat to get involved in domestic politics,” said host Margaret Brennan. “But this starts to look like using taxpayer-funded federal resources for a campaign. Will taxpayers be reimbursed?”

McDaniel said the party and Trump campaign, not taxpayers, were paying for the convention events.

“So you are confirming that Pompeo’s trip will be reimbursed by the campaign?” Brennan asked, suggesting that the trip itself could be seen to be linked to the convention.

“I’m not confirming anything having to do with Secretary Pompeo’s trip,” McDaniel replied. “I am just saying the programming, the staging, everything that we’re doing will be paid for by the Republican National Committee and the campaign.”

Jewish Democratic Council of America (JDCA) executive director Halie Soifer said, “It is unprecedented and highly unethical for a sitting secretary of state to address a political convention while on official foreign travel.”

“In addition to violating the Hatch Act, Secretary Pompeo’s plans to speak at the Republican National Convention from Jerusalem underscore the president’s ongoing effort to politicize the U.S.-Israel relationship.”

“Jewish voters see through this cheap political stunt and reject Trump’s ongoing use of Israel as a political wedge issue,” Soifer said. “The U.S.-Israel relationship has been, and should remain, a bipartisan issue.”

“It is alarming that the JDCA is more concerned about a speech that Mike Pompeo is making, at no cost to taxpayers, than it is about Joe Biden having his team apologize to the Jewish community for inviting vicious antisemite Linda Sarsour to speak at his convention and then apologizing for that apology to its antisemitic supporters,” he said.

‘Jerusalem should not be a prop’

Criticism also came from Wendy Sherman, a former undersecretary of state in the Obama State Department.

“At a time when peace and security in Middle East is so tough, Jerusalem should not be a prop for the RNC, and @SecPompeo should not be tarnishing the office of SecState,” she tweeted.

Coming soon after the Israel-UAE agreement, Pompeo’s visit to Israel will naturally underline the significance of the first Arab country agreeing to formally recognize Israel in 26 years. 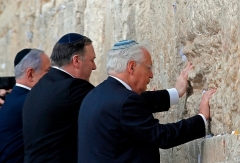 Secretary of State Mike Pompeo prays at the the Western Wall in Jerusalem’s Old City during a previous visit. With him are Israeli Prime Minister Binyamin Netanyahu and U.S. Ambassador to Israel David Friedman. (Photo by Jim Young/Pool/AFP via Getty Images)

Prime Minister Binyamin Netanyahu told a cabinet meeting Sunday that he would be hosting Pompeo – “my friend” – on Monday, and would “discuss with him expanding the circle of peace.”

The JDCA’s concern about Pompeo’s speech from Jerusalem comes after a series of policy positions by the administration broadly viewed as favorable towards Israel.

They include the relocation of the U.S. Embassy to Jerusalem; recognition of Israeli sovereignty over the Golan Heights; withdrawal from the disproportionately Israel-focused U.N. Human Rights Council; an announcement that the administration does not view Israeli settlements in disputed territory as inherently illegal; and a peace proposal recognizing the likelihood of ultimate Israeli sovereignty over the some disputed territory, including the Jordan Valley.

It is unusual for a secretary of state to address a party convention, although they frequently have done so after serving in that capacity. Last week former secretaries of state Hillary Clinton, John Kerry, and (Republican) Colin Powell spoke at the virtual DNC.

Henry Kissinger spoke at the RNC in 1980 and Condoleezza Rice did so at the 2012 convention, both after having left the State Department.

Madeleine Albright, a Democrat who has spoken at several Democratic conventions, did not speak at the 2000 event – when she was still secretary of state – but she did address a National Democratic Institute luncheon, on the day the DNC began, less than two miles from the convention venue in Los Angeles.

“As secretary of state, I am barred by tradition from playing a partisan role, and I want the record to reflect that I am completely neutral,” she said at the luncheon. “In fact, when this job began, I had all my partisan instincts surgically removed. And I would never publicly identify myself as a Democrat with a capital ‘D.’”

“Fortunately, the promotion of democracy happens to be a centerpiece of American foreign policy,” Albright continued, to laughter. “So when I say, ‘Hurrah for the democrats,’ it is perfectly legitimate. You just have to listen for the small ‘d.’”