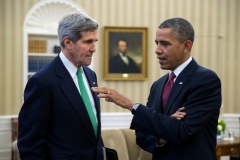 (CNSNews.com) – President Obama and then-Secretary of State John Kerry thought for some reason that five years was a long enough period to prevent Iran from being able to buy conventional weapons, but the Trump administration will do all it can to see the embargo extended ahead of its scheduled expiration in October, Secretary of State Mike Pompeo said on Thursday.

The U.S. has begun to circulate a draft U.N. Security Council resolution to extend the embargo, although Russia has already signaled it would veto any such measure.

“President Trump and our team is going to make sure that when we come to October of this year, we’re going to have played every card in our kit to make sure that they [the Iranian regime] can’t purchase tanks and armored vehicles from Russia or from China,” he said.

Under Security Council resolution 2231, restrictions on Iran’s ability to buy conventional weapons fall away on October 18. Resolution 2231 is the 2015 text that enshrined the Obama-era nuclear deal with Iran, the Joint Comprehensive Plan of Action (JCPOA).

“Unfortunately, the previous administration, Secretary Kerry and President Obama, thought that … a few months from now was a perfectly good date on which the Iranian government should be able to purchase conventional weapons systems from around the world,” Pompeo said.

Asked whether he had any insight into Obama’s thinking in allowing a regime designated by the U.S. as the world’s leading state sponsor of terrorism to resume weapons purchases so soon, Pompeo replied, “no explanation that is remotely reasonable there.”

“The president talked about it as far back as his campaign, about this ‘crazy’ Iran nuclear deal, and one of the core failures of it was the fact that these provisions that prevented Iran from getting weapons that could do so much more destruction began to expire very quickly,” he said.

For months the Trump administration has been warning the Security Council about the need to extend the embargo, citing Iran’s belligerent behavior.

“Time is drawing short to continue this activity of restricting Iran’s capacity to foment its terror regime,” Pompeo told the council last August, when the expiration was 14 months away. “The international community will have plenty of time to see how long it has until Iran is unshackled to create new turmoil, and figure out what it must do to prevent this from happening.”

But as the date draws nearer, critics like Russia are citing the U.S. decision to withdraw from the JCPOA as reason to oppose any extension.

Wendy Sherman, who together with Kerry led the U.S. team in the multilateral negotiations with the Iranian regime that produced the JCPOA, told the New York Times recently that Russia and China had opposed an arms embargo all along, and only agreed to one with a limited duration.

‘Revolutionary adventures around the Middle East’

After Pompeo spoke about the expiring embargo on Capitol Hill last March, Russia’s foreign ministry issued a lengthy statement making clear Moscow would oppose the extension of what was always intended to be “only a temporary measure.”

Accusing the U.S. of exaggerating the military threat posed by Iran, the ministry advised the U.S. not to try to convince Russia and China not to veto a draft text on extending the arms embargo, arguing that “it is no use raising this matter in the Security Council.”

“The timeframe and conditions coordinated in 2015 are not subject to revision. It is ridiculous that the country which has violated the resolution [by withdrawing from the JCPOA] is now proposing to extend its provisions, while at the same time trying to prevent other countries from honoring it.”

Rather than “dreaming of the endless extension of the arms embargo against Iran,” the ministry said, the U.S. should return to the JCPOA and strictly comply with resolution 2231.

Despite such sentiments, U.S. special envoy for Iran Brian Hook said Thursday the administration was “hopeful” it could secure an extension.

“Russia and China have great equities in a peaceful and stable Middle East, and Iran’s sectarian violence and its export of weapons is the principal driver of instability in the Middle East today,” he told reporters.

“As we survey the last five years, I would be delighted to hear someone make the case as a policy matter why the Iranian regime should be free to import and export conventional weapons,” Hook said. He accused the regime of using the sanctions relief it received under the JCPOA “to run an expansionist foreign policy and to double down on their revolutionary adventures around the Middle East.”

Also scheduled to expire in October are U.N. travel bans and asset freezes on 23 Iranian individuals. The original number was 24, but the most high profile of them, Qods Force commander Qassem Soleimani, was killed in a U.S. drone strike last January.