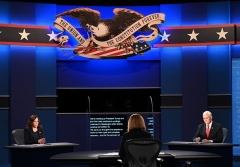 (CNSNews.com) – Vice President Mike Pence did not mince words when the moderator during Wednesday night’s debate in Utah noted that President Trump had again blamed China for the coronavirus outbreak. Pence declared categorically that China is to blame, and said the administration was “going to hold China accountable for what they did to America.”

“We have no more complicated or consequential foreign relationship than the one with China,” said moderator Susan Page of USA Today. “It is a huge market for American agricultural goods. It is a potential partner in dealing with climate change and North Korea. And in a video tonight, President Trump again blamed it for the coronavirus, saying China will pay.”

Page then asked Pence how he would describe the relationship with China: “Competitors? Adversaries? Enemies?”

“First and foremost, China is to blame for the coronavirus,” Pence said. “And President Trump is not happy about it. He’s made that very clear, made it clear again today. China and the World Health Organization did not play straight with the American people. They did not let our personnel into China to get information on the coronavirus until the middle of February.” (The U.S. first offered to send experts to China on January 4. Beijing eventually allowed a WHO team, including two Americans, to visit the country on February 17. The team reached the epicenter city of Wuhan on February 22.)

Pence said Trump had “fortunately” made a decision in late January to suspend travel from China.

“And again, the American people deserve to know, Joe Biden opposed President Trump’s decision to suspend all travel from China,” he said. “He said it was hysterical. He said it was xenophobic.”

“But President Trump has stood up to China and we’re going to continue to stand strong. We want to improve the relationship but we’re going to level the playing field,” Biden continued. “We’re going to hold China accountable for what they did to America with the coronavirus.”

Earlier, Trump posted a video talking about his recent hospitalization for COVID-19, promising to make a therapy that he had taken free for the American people.

Biden’s campaign denies that the candidate used the word “xenophobic” in reference to the travel restrictions.

The words were spoken at a rally in Fort Madison, Iowa on January 31, the same day Health and Human Services Secretary Alex Azar declared a national health emergency and Trump issued a proclamation barring entry to any non-U.S. national who has visited China in the previous 14 days – restrictions that were to go into effect from February 2.

“You know we have right now a crisis with the coronavirus, emanating from China. The national emergency and worldwide alerts,” Biden said. “This is no time for Donald Trump’s record of hysteria xenophobia – hysterical xenophobia to uh – and fearmongering.”

Biden tweeted two days later, “We are in the midst of a crisis with the coronavirus. We need to lead the way with science – not Donald Trump’s record of hysteria, xenophobia, and fear-mongering. He is the worst possible person to lead our country through a global health emergency.”