Pelosi, Again, Charges that the Russians Have Some Sort of Leverage on Trump 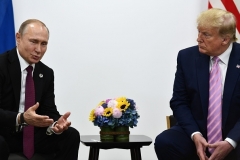 (CNSNews.com) – Repeating what has become a familiar theme for her, House Speaker Nancy Pelosi (D-Calif.) on Sunday insinuated that Russian President Vladimir Putin has some kind of leverage over President Trump.

This time she was responding to media reports saying that Trump had been briefed on claims that a Russian military intelligence unit had offered to pay terrorists to kill U.S. soldiers in Afghanistan.

Trump has denied being briefed about the allegations, a stance backed up by Director of National Intelligence John Ratcliffe. The president tweeted late on Sunday that the intelligence community had now told him the claims were not found to be “credible,” and he had therefore not been briefed on them.

“This is as bad as it gets,” Pelosi told ABC News’ “This Week” earlier in the day. “And yet the president will not confront the Russians on this score, denies being briefed.”

Whatever the case, she said, the administration was aware of the claims, and some U.S. allies in Afghanistan “have been briefed and accept this report.”

“Just as I have said to the president, with him all roads lead to Putin. He will not – he will, I don’t know what the Russians have on the president, politically, personally, financially, or whatever it is.”

She then went on to talk about Trump’s proposal for Russia to return to what used to be the G8, and cited Putin’s annexation of Crimea, military involvement in Syria and interference in the U.S. election.

Host George Stephanopoulos several minutes later brought Pelosi back to her remark about the Russians and Trump.

“Do you believe they have something on him?”

How else, she asked in reply, would you explain his positions – on Russian election interference, on the latest allegations regarding the Taliban in Afghanistan, and about bringing Russia back into the G7.

The suggestion that Putin “has” something on Trump has become a talking point for Pelosi.

Last April, she did so while responding on MSNBC’s “Morning Joe” to a question about the Senate Permanent Select Committee on Intelligence’s finding that the U.S. intelligence community’s assessment regarding Russian interference in the 2016 election had been sound.

Pelosi said that as a member of the “Gang of Eight” – a group of congressional leaders who are generally informed about classified intelligence – she was not surprised by the Senate committee’s finding.

“And that leads you to the question,” she continued. “What does Vladimir Putin have on President Trump – personally, politically, financially, in any way – that he would choose Putin’s word, what Putin said, over the intelligence community?”

In July 2018, Pelosi asked the question again, on that occasion as Trump was making waves at a NATO summit by pressing allies to increase their defense spending, and ahead of a meeting between Trump and Putin in Helsinki.

“All of the behavior of the president this week, as a continuation of his behavior before, begs the question that I have asked for 18 months,” she said during a weekly news briefing. “What do the Russians have on Donald Trump, politically, financially and personally?”

“Because there’s no way to explain the disrespect that he’s demonstrating to NATO allies,” she said.

Four months earlier, Pelosi asked the same question, in a letter to supporters accusing Trump of firing Secretary of State Rex Tillerson, “apparently because he was outspoken against Russia.”

“What does Russia have against President Trump personally, professionally, or financially, that Trump refuses to hold them accountable for attacking our Democracy?” she asked.

And in January 2018, Pelosi during a press briefing criticized Trump for holding off on imposing sanctions on Russia under the Countering America's Adversaries Through Sanctions Act (CAATSA) which he had signed into law the previous August.

Accusing Trump of an “outright refusal” to impose sanctions against Russia, she said, “What do the Russians have on him, politically, personally, financially, that he would – that he would ignore his responsibilities?”

Pelosi was speaking on the day marking the beginning of a period in which Trump under the legislation could begin imposing sanctions on Russia.

Democrats were critical because the administration had no immediate Russia sanctions to announce that day. (The law separately provided for sanctions against Iran and North Korea too.)

Six weeks later, the administration did announce CAATSA sanctions on Russian entities and individuals for cyberattacks and interference in the 2016 election, and did so just days before Russia held presidential elections.

The timing prompted Moscow to accuse Trump of trying to interfere in the Russian election, in which Putin was seeking another six-year term.