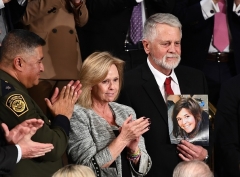 Carl and Marsha Mueller, among the special guests at President Trump’s State of the Union address on February 4, 2020, hold up a picture of their daughter, Kayla. (Photo by B

(CNSNews.com) – The parents of a young aid worker kidnapped by ISIS in Syria, raped repeatedly by its leader, and later killed, on Thursday contrasted the response of the Trump administration and that of its predecessor to their family’s plight.

“The Trump team gave us empathy we never received from the Obama administration,” said Carl Mueller, whose daughter Kayla was held by the terrorists for 18 months before her death in early 2015.

Kayla Mueller was kidnapped in Aleppo in August 2013, days before her 25th birthday.

Her father, speaking alongside his wife, Marsha, took up the story.

“Kayla was mostly held in a 12’ by 12’ cell, in solitary confinement. It was cold and dirty,” he said. “ISIS terrorists shined bright lights in her face. They shaved her head. They beat her and tortured her. The leader of ISIS, Abu Bakr al-Baghdadi, raped her repeatedly.”

“For 18 months she endured,” he said. “And we endured an agonizing back-and-forth between us, the Obama administration, and ISIS.”

“We put all our faith in the government. But our government let us down,” Mueller said. “President Obama refused to meet with us until ISIS had already beheaded other Americans.”

“To this day, we’ve never heard from Joe Biden.”

According to previously published accounts, ISIS in communication with the Muellers demanded a multi-million dollar ransom. The U.S. government has a longstanding policy of not paying ransoms for the release of hostages held by terrorists.

Alluding to that, Mueller said, “the Obama administration hid behind policy so much that we felt hopeless when they kept us from negotiating to save Kayla’s life.”

“The administration showed more concern for the terrorists in Guantanamo than the American hostages in Syria,” he added, possibly a reference to the controversial 2014 swap of five senior Taliban detainees at Guantanamo Bay for Army Sgt. Bowe Bergdahl, who had been captured by terrorists in Afghanistan.

The military prepared a rescue mission, but the White House delayed it. By the time it went forward, Kayla had been moved to another location.

After 18 months of brutal torture, we learned from ISIS that Kayla had been killed.

The Obama administration kept telling us they were doing everything they could. But their version of ‘everything’ wasn’t enough.

“What a difference a president makes,” Mueller said.

He recalled President Trump’s order for the Special Forces raid on Baghdadi’s compound in northwestern Syria in October 2019. Trump said at the time Baghdadi had killed three young children, then himself as U.S. forces bore down on him, dying “like a coward.”

“To those soldiers: thank you,” he said. “Kayla was looking down on you.”

“Let me just say this,” Mueller said. “Kayla should be here. If Donald Trump had been president when Kayla was captured, she would be here today.”

In February 2015, ISIS said that Mueller had been killed when a building was hit by a Jordanian airstrike on ISIS’ self-declared capital, Raqqa.

Information subsequently provided by a convicted female ISIS terrorist – at whose house Kayla was held for some time – called that claim into question. Umm Sayyaf, who is now on death row in Iraq, reportedly said Baghdadi had ordered the American’s death because she had become a security liability.

“All Kayla wanted was to make it home,” Marsha Mueller said on Thursday. “We are still working to find her and, God willing, we will bring her home.”

The Muellers were special guests of the president and First Lady Melania Trump at the 2020 State of the Union.

“On the night that U.S. Special Forces Operations ended al-Baghdadi’s miserable life, the Chairman of the Joint Chiefs of Staff, General Mark Milley, received a call in the Situation Room,” the president said.

“He was told that the brave men of the elite Special Forces team that so perfectly carried out the operation had given their mission a name: ‘Task Force 8-14.’  It was a reference to a special day: August 14th – Kayla’s birthday. Carl and Marsha, America’s warriors never forgot Kayla. And neither will we. Thank you.”

In a statement issued on February 10, 2015, President Obama praised Kayla’s compassion and dedication to serving others, and said, “No matter how long it takes, the United States will find and bring to justice the terrorists who are responsible for Kayla’s captivity and death.”

In a Buzzfeed interview the same day, Obama disputed that the U.S. had not done everything possible to rescue the hostage.

“We devoted enormous resources, always devote enormous resources to freeing captives or hostages anywhere in the world,” he said. “I deployed an entire operation – at significant risk – to rescue not only her but the other individuals who had been held, and probably missed them by a day or two, precisely because we had that commitment.”

Obama was referring to a Special Forces raid in northern Syria in July 2014. “Unfortunately, the mission was not successful because the hostages were not present at the targeted location,” Pentagon spokesman Adm. John Kirby said at the time.