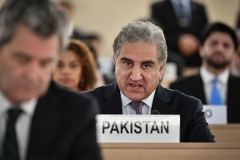 (CNSNews.com) – Pakistan’s foreign minister denied during a CNN interview Thursday that his country turns “a blind eye” to the plight of Muslims in China’s Xinjiang region while condemning Israel over the situation in Gaza.

Shah Mahmood Qureshi suggested that the Pakistani government does discuss the Xinjiang issue with its Chinese counterparts, but out of the public eye.

“China is a very good friend of Pakistan,” he told anchor Bianna Golodryga. “It stood by us through thick and thin, and we have means of communication. And we use our diplomatic channels. We do not discuss everything in public.”

“You can’t just turn a blind eye to human rights abuses in one country when we’ve spent –” Golodryga began.

“Nobody is,” he interjected. “Nobody is.”

Numerous governments and human rights groups have accused the Chinese Communist Party of committing crimes against humanity in Xinjiang, and the U.S. and others have determined that those crimes amount to genocide.

“I’m wondering why we’re not hearing the same from your government?” Golodryga asked.

“My government has always spoken with frankness,” he replied.

In fact, Pakistan has signed up to at least five joint statements at United Nations forums, praising Beijing for its policies in Xinjiang – in March 2021 at the Human Rights Council (HRC) in Geneva, in October 2020 at a U.N. General Assembly committee dealing with human rights, in July 2020 at the HRC, in October 2019 in the UNGA, and in July 2019 at the HRC.

In each case Pakistan has been joined by dozens of other Organization of Islamic Cooperation (OIC) members in defending China’s treatment of minority Muslims. In other contexts, the bloc of Muslim-majority nations is outspoken about actions it views as hostile towards Muslims – none more so than the Palestinian issue.

Pakistan and China have been close diplomatic allies for decades, and Pakistan – along with other leading OIC members including Egypt, Iran, and Saudi Arabia – is also a key partner in China’s massive infrastructure program, the Belt and Road Initiative.

Prominent Islamic states’ refusal to challenge China of its treatment of the Uyghurs has drawn strong criticism from some Muslim non-governmental groups.

Pakistan is a leading voice in the OIC. On Thursday, the HRC confirmed that it will hold a “special session” next week on the Israel-Gaza situation, at the behest of Pakistan on behalf of the bloc.

Golodryga told him that Uyghurs around the world heard him “spend a lot of time talking about human rights in Gaza,” raising questions about the legitimacy of their own human rights.

But he quickly pivoted to the situation in Kashmir, the divided Himalayan region disputed between Pakistan and India.

“Well, we have been advocating for human rights, whether they are in Gaza or in Indian-occupied Kashmir,” Qureshi said.

“Look at the atrocities that have been committed in Kashmir. Does the world talk about it? How many people have talked about it? You know, let’s be fair.”

The sometimes uncomfortable interview began with Qureshi charging that the Israelis have “deep pockets” and “control [the] media,” prompting Golodryga to say she would call such remarks anti-Semitic.

“They have a lot of influence and they get a lot of coverage,” he pushed back.

Israel does get a disproportionate amount of attention in international media coverage. Most of it ranges from negative to hostile.

See also:
Islamic, Communist, and Other Autocratic Regimes Back China's Treatment of Muslims in Xinjiang (Oct. 7, 2020)

China Thanks 36 Countries, Half of Them Islamic States, for Praising Its Uighur Policies (Jul. 15, 2019)

Islamic Bloc Challenged Over its Silence on Uighurs: ‘If They Truly Care About Muslims …’  (July 3, 2019)