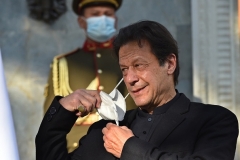 (CNSNews.com) – Pakistani Prime Minister Imran Khan, who is leading a push to persuade the international community to accept the Taliban regime, argues that the terrorist group that seized power in Afghanistan is “the best bet to get rid of ISIS.”

Khan, whose country has historically been the Taliban’s key mentor and ally, also warned that not engaging could prompt “hardliners” in the fundamentalist group to revert to earlier behavior.

“A stable Afghanistan government, which can then take on ISIS – and believe me, the Taliban are the best bet to get rid of ISIS – that is the only option left,” he said during an interview with Middle East Eye, a U.K.-based news outlet.

Khan argued that isolating the Taliban would boost “hardliners” and could push the group back to what it was two decades ago, before U.S.-led forces toppled the regime that refused to surrender its al-Qaeda allies after the 9/11 terror attacks.

“It’s a critical point for Afghanistan,” he said. “The world must engage with Afghanistan, because if it pushes it away, within the Taliban movement I would imagine there would be hardliners, and so it can easily go back to the Taliban of 2000, 20 years ago.”

In fact, many of the senior cabinet posts in the current regime are held by men who held top posts in the regime that controlled most of Afghanistan in 1996-2001 and was largely shunned by the international community, recognized only by Pakistan, Saudi Arabia and the UAE.

And while Taliban leaders have been holding talks with foreign government representatives and U.N. humanitarian officials, reports of abuses including reprisal killings and restrictions on the free movement of women and the education of girls continue to draw condemnation.

Khan said that “isolating” and “sanctioning” the Taliban would cause “chaos” and lead to “a huge humanitarian crisis.”

He said Americans had been left “in a state of shock” because they envisaged the outcome of the war in Afghanistan would be “some sort of democracy or nation building or liberated women, and suddenly they find [the] Taliban back.”

The United States, he said, needs to “pull itself together” and take the lead.

U.S. officials at the weekend held the first face-to-face meetings with senior Taliban representatives since the chaotic departure in August. The two days of talks, in the Qatari capital Doha, covered a range of concerns, including humanitarian assistance for the people of Afghanistan.

A State Department readout on the meetings made no reference to the issue of recognition having been discussed, saying only that the U.S. delegation had reiterated “that the Taliban will be judged on its actions, not only its words.”

President Biden will be taking part on Tuesday in a virtual meeting of G20 leaders to discuss close coordination among the major economies on dealing with the new situation in Afghanistan.

Khan’s claim that the Taliban regime offers “the best bet to get rid of ISIS” refers to the Afghanistan affiliate of the Sunni jihadist group, ISIS-Khorasan (ISIS-K).

ISIS-K has carried out at least six serious attacks since the late August one that targeted the U.S.-led evacuation mission at Kabul airport, killing 13 U.S. service personnel and more than 160 Afghan civilians.

Taliban members have been targeted in some of the incidents – including a Sept. 27 assault on a checkpoint in Kunar province, and a Sept. 22 attack on a Taliban vehicle in Jalalabad – but the deadliest attack, on Friday, targeted a Hazara Shi’ite mosque in Kunduz, killing at least 47 worshipers and injuring another 140 people.

The two Islamist extremist groups follow different persuasions within Sunni Islam – the Hanafi schools of jurisprudence in the case of the Taliban, and the Salafist current in the case of ISIS.

President Biden, among others, has described them as sworn foes. On the other hand U.N. Security Council monitoring reports, which incorporate intelligence from member-states, have cited instances of apparent coordination between ISIS-K and the Haqqani Network, an integral part of the Taliban.