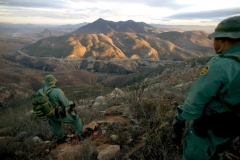 (CNSNews.com) – The number of U.S. Customs and Border Protection “encounters” with illegal Russian migrants on the southwest border in the first month of the new fiscal year rose more than 225-fold from the same month last year.

According to monthly data released by the CBP on Monday, 1,577 encounters with Russians were recorded last month, up from just seven in October 2020 – an increase of 22,428.6 percent.

Overall, the CBP reported 164,303 encounters on the southwest border last month, the majority from Mexico (65,726), and the northern triangle countries of Guatemala, El Salvador, and Honduras (50,937 combined). 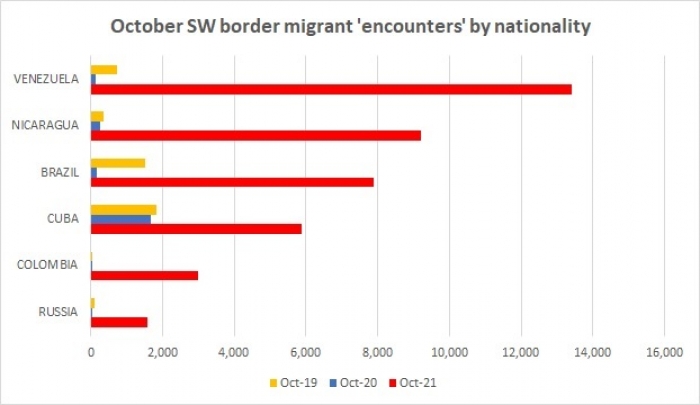 The data released by the CBP do not include an accounting of those migrants who escape detection on their way into the United States. 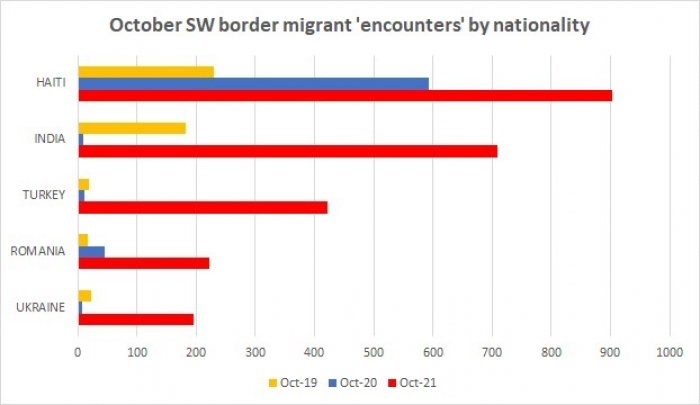 The CBP provides data on “encounters” rather than the number of actual individuals apprehended because it says many migrants make multiple attempts to get into the United States.

For the month of October, the CBP said 29 percent of the encounters involved individuals who had had at least one prior encounter during the previous 12-month period.

The CBP is the largest federal law enforcement agency falling under the Department of Homeland Security.

“Do you believe that the Biden immigration policies are successful?” Sen. Lindsey Graham (R-S.C.) asked Mayorkas.

(White House press secretary Jen Psaki alone has used the word “broken” in relation to the immigration system during at least 13 separate press briefings since March.)

“You think we’re on the right track as a nation?” Graham asked.

Asked how he would grade himself, Mayorkas replied, “Senator, I’m a tough grader on myself. And I give myself an ‘A’ for effort, investment in mission, and support of our workforce.”

Graham then asked whether Mayorkas thought the authorities have more control over the border now than was the case under the Trump administration.

“I think that we have more control that is consistent with our values as a nation,” he said.