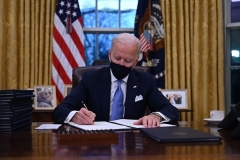 President Joe Biden signs the first of a series of executive orders, in the Oval Office on Wednesday. (Photo by Jim Watson/AFP via Getty Images)

(CNSNews.com) – Promising an agenda including “bold and vital” steps, President Joe Biden said on Wednesday that there was “no time to start like today,” as he signed the first of a stack of executive orders, including one mandating mask wearing on federal property and another rejoining the Paris climate accord.

“I’m going to start by keeping the promises I made to the American people,” Biden told reporters in the Oval Office. “There’s a long way to go. These are just executive actions. They are important, but we’re going to need legislation for a lot of the things we’re going to do.”

Wearing a mask, Biden sat at the Resolute Desk, with a pile of executive orders at his right hand and around a dozen pens in front of him. Behind the desk an array of framed photographs could be seen, along with a bust of American labor leader Cesar Chavez.

“It’s requiring, as I said all along, where I have authority, mandating masks be worn, social distancing be kept, on federal property and interstate commerce etc.”

The second executive order he signed related to “support for under-served communities.”

“We’re going to make sure we have some bedrock equity, equality as relates to how we treat people, in healthcare and other things,” he said.

The third executive order Biden signed was on rejoining the Paris climate accord. The 2016 U.N. agreement that aims to prevent average global temperatures from rising more than two degrees Celsius above pre-industrial levels, by achieving net-zero carbon emissions by the second half of the century.

President Trump in 2017 gave notice to withdraw from the accord, and that move took formal effect last month. Biden said Wednesday he was signing the order in line with his commitment to rejoin the agreement “as of today.”

The White House said the instrument to rejoin the Paris agreement was being deposited with the United Nations on Wednesday, and that the U.S. would officially be a party to the accord again in 30 days’ time. “The United States will be back in position to exercise global leadership in advancing the objectives of the agreement,” it said in a statement.

Trump viewed the Paris agreement as inherently unfair to the U.S., while benefiting other major carbon emitters, like China and India.

“If you listen closely, you can hear the communist government in China popping champagne,” tweeted Rep. Dan Crenshaw (R-Texas) in response to the move to rejoin the climate accord. “This’ll give a free pass to polluters like China while hurting American businesses & energy independence. Foolish virtue signal that may please the left but does nothing for the environment.”

Other steps flagged for day one include an order to reverse the Trump administration’s process of withdrawing from the World Health Organization.

Trump accused the U.N. agency of being inappropriately deferential towards China, rather than pushing Beijing to respond more quickly and effectively to the coronavirus outbreak. The Biden White House on Wednesday called the WHO “an entity that is critical to coordinating the international response to COVID-19, advancing preparedness for future epidemics and pandemics, and improving the health of all people.”

As early as Thursday the new administration plans to take part in an ongoing WHO executive board meeting, with Dr. Anthony Fauci – the new chief medical advisor to the president – serving as head of delegation.

“Once the United States resumes its engagement with the WHO, the Biden-Harris administration will work with the WHO and our partners to strengthen and reform the organization, support the COVID-19 health and humanitarian response, and advance global health and health security,” the White House said.

As reporters were being ushered out after Biden signed the third order, in response to a called-out question he said that Trump had written him “a very generous letter.”

“Because it was private I will not talk about it until I’ve talked to him,” he said. “But it was generous.”