(CNSNews.com) –  As President Trump on Tuesday presided over first diplomatic agreements between Israel and Arab nations in 26 years, Israeli Prime Minister Binyamin Netanyahu urged naysayers to “rise above” political divides and to “put all cynicism aside.”

“Despite the many challenges and hardships that we all face, despite all that, let us pause for a moment to appreciate this remarkable day,” he said at the White House ceremony.

“Let us rise above any political divide. Let us put all cynicism aside. Let us feel, on this day, the pulse of history – for long after the pandemic is gone, the peace we make today will endure.”

“We’re here this afternoon to change the course of history,” said Trump. “After decades of division and conflict, we mark the dawn of a new Middle East.”

Trump and Netanyahu signed separate agreements with the foreign ministers of the United Arab Emirates and Bahrain, formalizing the two Gulf states’ agreement to recognize and normalize relations with the Jewish state.

Trump said on several occasions during the day’s events that a handful more Arab countries were on track to follow the UAE and Bahrain, “some before the election, perhaps” – including Saudi Arabia “at the right time.”

(Of the 21 Arab nations, four now fully recognize Israel. Sudan, Oman, and Morocco are among others thought likely to do so in the near future.)

Outside the White House grounds, scores of protestors waved Palestinian flags and chanted “normalization is a crime,” in line with the view held by Palestinian leaders and their allies that the Israeli-Palestinian conflict must be resolved before Arab states recognize Israel.

Also reiterating their opposition to the normalization agreements were the Iranian regime, Turkey’s Islamist government, and the Palestinian leadership.

Palestinians in the West Bank protested the signing, and rockets fired into Israel from the Hamas-controlled Gaza Strip sent hundreds of thousands of residents into bomb shelters and injured two Israelis in the city of Ashdod. More were reported overnight. 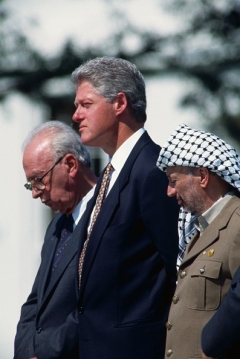 The signing took place on the exact spot where, 27 years and two days earlier, President Clinton oversaw the signing of the interim Oslo accords between Israel and the PLO.

The interactions between the principals – even despite the coronavirus-related absence of handshaking – seemed considerably warmer and less awkward on Tuesday than they were on that day in 1993.

After signing the Israel-UAE agreement, Emirati Foreign Minister Abdullah bin Zayed al-Nahyan, speaking past Trump, thanked and congratulated Netanyahu, who reciprocated and placed his hand over his heart.

Striking an optimistic note, both Al-Nahyan and his Bahraini counterpart, Abdullatif al-Zayani, alluded in their statements to the benefits the agreements would bring in particular to the young people in the region.

“This new vision – which is beginning to take shape as we meet today for the future of the region, full of youthful energy – is not a slogan that we raise for political gain, as everyone looks forward to creating a more stable, prosperous, and secure future,” said al-Nahyan.

“Today is a truly historic occasion, a moment of hope and opportunity for all the peoples of the Middle East and, in particular, for the millions in our younger generations,” said Bahrain’s al-Zayani.

“The declaration supporting peace between the Kingdom of Bahrain and the State of Israel is an historic step on the road to genuine and lasting peace, security and prosperity across the region, and for all who live there regardless of religion, sect, ethnicity, or ideology,” he said.

“For too long, the Middle East has been set back by conflict and mistrust, causing untold destruction and thwarting the potential of generations of our best and brightest young people.
Now I’m convinced we have the opportunity to change that.”

‘A peace between peoples’

Israel signed peace treaties with Egypt in 1979, with Jordan in 1994, but while they formally ended decades of war both ushered in what analysts frequently describe as a “cold peace” between the former foes.

The breakthroughs between Israel and the UAE and Bahrain – which while they never actively fought against Israel were hostile towards it in previous decades – already have a different feel.

“This is not only a peace between leaders, it’s a peace between peoples,” Netanyahu said at the White House. “Israelis, Emiratis, and Bahrainis are already embracing one another. We are eager to invest in a future of partnership, prosperity, and peace. We’ve already begun to cooperate on combating corona, and I am sure that, together, we can find solutions to many of the problems that afflict our region and beyond.”

An official in Abu Dhabi stands near the first Israeli El Al commercial flight to land in the UAE, on Aug. 31. The agreement signed in Washington on Tuesday provides for full diplomatic relations and economic cooperation across a range of sectors. (Photo by Karim Sahib/AFP via Getty Images)

Saqr Ghobash, speaker of the UAE’s federal legislature, said the agreement with Israel was a historic step toward reviving the process of peace in the Middle East, and would guarantee the region’s security and stability.

Economy Minister Abdulla bin Touq told a virtual event in Washington on Monday night that “the prospects of trade and commerce between Israel and the UAE are exciting for both countries,” with tremendous potential for cooperation across many sectors.

Deputy Culture Minister Omar Ghobash told The National, an Abu Dhabi newspaper, that a long-held “taboo” was being lifted, and Israelis should brace for visits by young Emiratis who “love to travel and experience new things.”

In Bahrain, vocal support for the agreement also came from the parliamentary speaker, the chairman of the Shura Council and a top military leader, while the Bahraini and Israeli transportation ministers held a phone conversation to congratulate each other and discuss new horizons of cooperation.