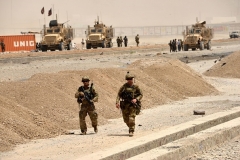 (CNSNews.com) – As it announced sanctions as part of the long-pledged “costs” and “consequences” for malign Russian behavior, the Biden administration on Thursday conceded that the intelligence community has only “low to moderate confidence” regarding one of the issues that has been under review – claims that Russia offered terrorists bounties to kill U.S. troops in Afghanistan.

While campaigning for the White House, then-Democratic nominee Joe Biden repeatedly flayed President Trump over the allegations, which were first reported in the New York Times last June. White House press secretary Jen Psaki on Thursday dodged a question on whether the president now regrets that.

“The United States intelligence community assesses, with low to moderate confidence, that Russian intelligence officers sought to encourage Taliban attacks against U.S. and coalition personnel in Afghanistan in 2019 and perhaps earlier, including through financial incentives and compensation,” a senior administration official said during a background briefing on Thursday.

“U.S. intelligence community agencies have ‘low to moderate’ confidence in this judgment, in part because it relies on detainee reporting and due to the challenging operating environment in Afghanistan,” the official continued. “Our conclusion is based on information and evidence of connections between criminal agents in Afghanistan and elements of the Russian government. This information puts a burden on the Russian government to explain its actions and take steps to address this disturbing pattern of behavior.”

In contrast to other Russian actions that have been subject to the review and are now attracting sanctions and diplomat expulsions – including election interference and hacking – no measures were announced in connection with the alleged Afghanistan bounty issue.

Instead, “[g]iven the sensitivity of this matter, which involves the safety and well-being of our forces, it is being handled through diplomatic, military and intelligence channels,” said a White House factsheet.

Asked why the administration was listing the bounty issue if intelligence confidence was only “low to moderate,” the briefing official said, “our focus is on sending a clear message to Russia about the steps the United States would take in response to such behavior were it to continue.”

At a White House briefing, Psaki said, “we felt the reports were enough of a cause of concern that we wanted our intelligence community to look into those reports as a part of this overall assessment.”

She repeated the assertion about difficulties posed by “the operating environment” in trying to get to the bottom of the claims, and that the onus was on the Russian government “to explain their engagement here.”

Asked whether – given the “low to moderate” assessment – Biden regrets having repeatedly attacked Trump on the campaign trail over the issue, Psaki deflected.

“Well, I’m not going to speak to the previous administration,” she said. “But I will say that we had enough concern about these reports and about the targeting of our men and women serving – the men and women who are proudly serving around the world – that we wanted our intelligence community to look into it.”

It said Trump had been briefed on the matter three months earlier but had yet to authorize any of a range of proposed response options.

A follow-up Times report said special operations forces had alerted their superiors in January 2020 after “a large amount of American cash” was found during a raid on a Taliban outpost. Information had also been obtained during the interrogation of “captured militants and criminals.”

The claims – denied by both Moscow and the Taliban – sparked an outcry, with some senior Republican lawmakers joining calls for the White House to respond.

Trump said the intelligence community had not found the claims to be “credible,” and had therefore not reported them to him – an assertion backed by then-Director of National Intelligence John Ratcliffe.

Biden had strong words for Trump.

“The truly shocking revelation that if the Times report is true, and I emphasize that again, is that President Trump, the commander-in-chief of American troops serving in a dangerous theater of war, has known about this for months, according to the Times, and done worse than nothing,” he told a virtual town hall in late June.

Biden on that occasion conditioned his remarks on the report proving to be true. By the time he and Trump met on the debate stage in Ohio in September, however, he offered no such proviso.

“He’s Putin’s puppy,” Biden said of Trump. “He still refuses to even say anything to Putin about the bounty on the heads of American soldiers.”

In their second debate the following month, Biden raised the issue again: “I don’t understand why this president is unwilling to take on Putin, when he’s actually paying bounties to kill American soldiers in Afghanistan.”

In September, U.S. Central Command commander Marine Gen. Kenneth McKenzie told NBC News that the claims have “not been proved to a level of certainty that satisfies me.”

“We continue to look for that evidence,” the general said. "I just haven’t seen it yet.”

McKenzie also said that the issue was not “closed.”