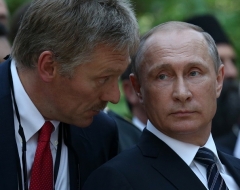 Peskov told Russian television that Putin “will show wisdom” if required, saying such a response would be “quite predictable.”

He said it was “difficult to understand this tendency” of promoting sanctions, after the discussions held between Putin and President Biden in Geneva last June.

Both Peskov and the pro-Putin television presenter who was interviewing him on Channel 1, Vladimir Solovyov, are among the 35 people listed in a bipartisan sanctions amendment included in the National Defense Authorization Act (NDAA) for fiscal year 2022.

The House of Representatives passed the $778 billion NDAA in a 316-113 vote on Thursday.

Proposed by Reps. Tom Malinowski (D-N.J.) and John Curtis (R-Utah), the amendment requires the president to submit to congressional committees a determination on whether the 35 named officials and businessmen meet the criteria to be sanctioned under Global Magnitsky Act, a 2016 law that provides for punitive measures against human rights abusers and corrupt actors.

The 35 Russians were identified by the anti-corruption network led by imprisoned opposition leader Alexei Navalny, in a letter sent to President Biden early this year.

In Malinowski’s words, the 35 “help prop up Putin’s abusive regime and shadow wars around the world.”

They include Prime Minister Mikhail Mishustin; the heads of the Federal Security Bureau (FSB), the National Guard, Russia’s Investigative Committee (the main federal investigating authority), the federal prison service, and the Central Election Commission; the ministers of agriculture and health; deputy defense minister; and Putin’s chief of staff Anton Vaino and his deputy, Sergei Kirienko.

Some of the individuals named are already targeted for U.S. and/or European Union sanctions, over the poisoning last year of Navalny. The U.S. intelligence community has assessed “with high confidence” that the FSB was behind the assassination attempt.

Bastrykin is also among those sanctioned by the British government last summer in connection with the 2009 death in custody of Sergei Magnitsky, the Russian lawyer for whom the Global Magnitsky Act is named.

The law was expanded in 2016 to apply to abusers internationally, and similar measures have been put in place in Britain, Canada, and several other countries.

The NDAA passed by the House last week will have to be reconciled with the Senate version before the legislation is sent to the president’s desk to be signed into law.