Jordan, Recipient of Billions in US Aid, Still Won’t Extradite Terrorist Linked to Murder of Americans 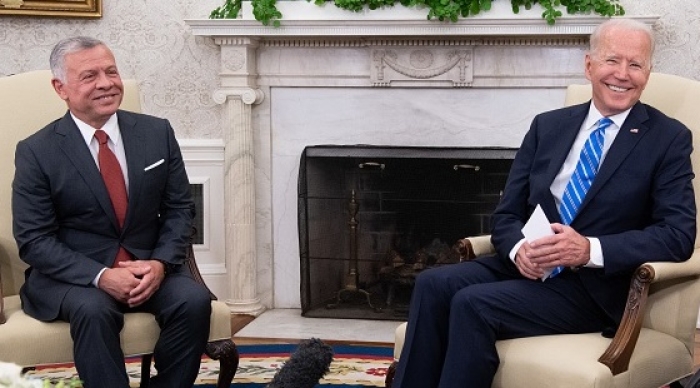 President Biden with Jordan’s King Abdullah II in the Oval Office of the White House in July 2021. (Photo by Saul Loeb / AFP via Getty Images)

(CNSNews.com) – Almost a decade after the Department of Justice filed charges against a Jordanian woman in connection with a 2001 bombing in Jerusalem in which U.S. citizens were killed, she remains at large because Jordan, a major recipient of U.S. aid, refuses to extradite her.

With Secretary of State Antony Blinken reportedly planning to visit Israel this month, the parents of a child killed in the bombing are asking – not for the first time – for a meeting to discuss the matter.

Arnold Roth, who for years has lobbied U.S. administrations to induce Jordan to extradite the wanted terrorist, said on Tuesday he has requested a meeting, but has yet to hear back.

Arnold and Frimet Roth’s 15-year-old daughter Malki was one of two Americans among the 15 people killed when a Hamas suicide bomber detonated his nail-laden device in a crowded restaurant in Jerusalem in August 2001. The other American citizen killed was Judith Greenbaum, 31, who was pregnant.

Seven of the 15 people killed in Sbarro pizzeria that afternoon were children, aged between two and 16 years old.

The bomber had not acted alone, but was escorted to the site by Ahlam al-Tamimi, a 20-year old Hamas member and part-time journalist, who had earlier scouted for suitable targets for killing as many Jews as possible.

Tamimi, who left the area minutes before the blast, would later recount her joyful reaction at hearing breaking news bulletins of the climbing death toll.

Later arrested, Tamimi was convicted in 2003 and sentenced by an Israeli court to 16 life terms. But in 2011 she was controversially included in a mass release of Palestinian prisoners, exchanged for an Israeli soldier who had been held by Hamas in Gaza for five years.

She was deported to Jordan, receiving what Palestinian news outlets described as a “hero’s welcome.” 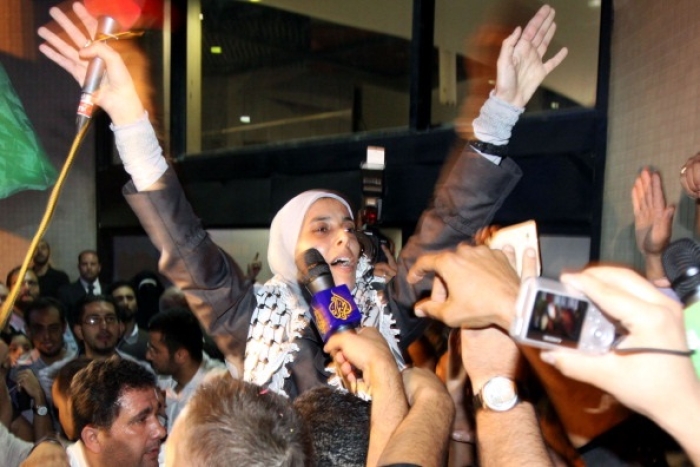 In 2013 the Justice Department charged Tamimi, a Jordanian citizen, with “conspiring to use a weapon of mass destruction against U.S. nationals outside the U.S., resulting in death” and privately sought her extradition. Four years later the charges and an arrest warrant were unsealed.

Tamimi was placed on the FBI’s “most wanted terrorist” list, the subject of a reward of up to $5 million.

Shortly after the unsealing, Jordan’s highest court ruled that the kingdom’s 1995 extradition treaty with the U.S. was invalid, never having been ratified by Jordan’s parliament.

The U.S. government rejects that claim, declaring the treaty to be “valid and in force,” and the standoff over Tamimi’s extradition continues.

“The Tamimi case is one we take seriously given her role in the heinous attack that killed 15 people, including two Americans, in 2001,” a State Department spokesperson said this week.

“I want to make it clear that the U.S. government is committed to seeing that Ahlam Al Tamimi faces justice in the United States.” 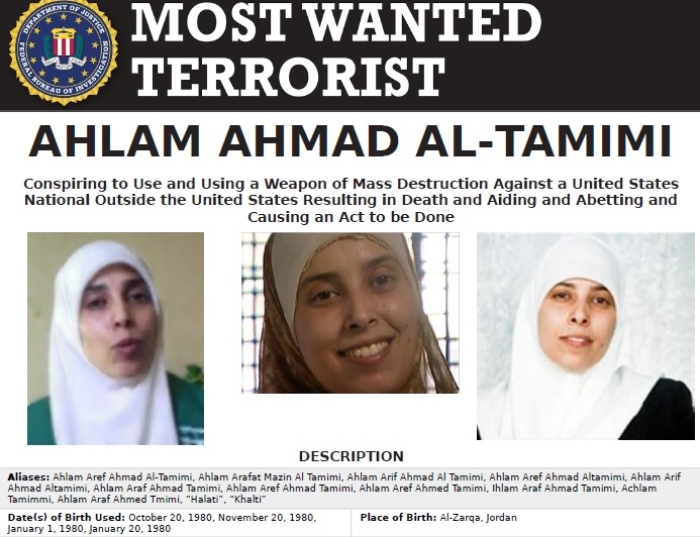 Jordan has been a major beneficiary of U.S. military and economic aid for decades, totaling close to $24 billion through fiscal year 2019, according to the Congressional Research Service.

A memorandum of understanding (MOU) signed with Jordan last September provides for $1.45 billion in U.S. aid each year between FY 2023 and FY 2029, subject to congressional appropriations.

When the current U.S. Ambassador to Jordan, Henry Wooster, was going through his confirmation process in 2020, he assured Senate Foreign Relations Committee members in writing that he would “engage Jordanian officials at all levels” on the Tamimi issue.

Asked whether he would commit to using the leverage offered by generous U.S. support to Jordan, Wooster replied, “If confirmed, I would explore all options to bring Ahlam Aref Ahmad Al-Tamimi to justice, secure her extradition, and address the broader issues associated with the extradition treaty.”

Wooster will presently be leaving his post in Amman; President Biden on January 3 nominated Yael Lempert, principal deputy assistant secretary for the Bureau of Near Eastern Affairs, to be the next ambassador to Jordan.

A series of questions submitted to the U.S. Embassy last week about efforts Wooster has made in line with his confirmation process assurances to secure Tamimi’s extradition, brought no response to press time.

Among other things, the embassy was asked whether the MOU signed in the fall contained any stipulations regarding resolution of the dispute. (A Jordanian newspaper in October cited Wooster as saying there were no conditions attached to the MOU.)

The Roth family request to meet with Blinken comes six months after they unsuccessfully sought a meeting with Biden when he visited Israel last summer.

Shortly before Biden hosted Jordan’s King Abdullah in the Oval Office in July 2021, they published an op-ed in the Wall Street Journal, urging the president to ask his guest “why our daughter’s murderer remains protected by his kingdom.”

There was no indication, however, that the Tamimi extradition came up at all during that visit – or in subsequent interactions between Biden and Abdullah.

The issue did not feature in their public remarks in July 2021, or in a White House readout of their meeting.

It was also not mentioned in a readout of a Biden-Abdullah meeting in Washington in May 2022, in a joint statement after a further bilateral meeting in Jeddah in July 2022, or in readouts of phone conversations in April 2021 and April 2022.

‘A mockery of American justice’

Arnold Roth said Wednesday he was not surprised not to have received a response to the request to meet with Blinken.

“No U.S. secretary of state in all the years since the U.S. indicted Tamimi has ever addressed us,” he said.

Roth contrasted that with the administration’s response to the death of American-Palestinian journalist Shireen Abu Akleh during an Israeli security operation in Jenin last May.

“When American officials at that level of seniority want to show how serious they are about justice and accountability, they reach out as they did repeatedly to Shireen Abu-Akleh’s kinspeople and extend courtesies and support,” he said. “We have never come close to seeing anything like that. Quite the opposite.”

Roth noted that Malki’s murder, as distinct from the Abu-Akheh case, was the subject of a U.S. prosecution.

“A Jordanian woman freely and brazenly takes full credit for deliberately engineering and leading the massacre at the Sbarro pizzeria in Jerusalem,” he said. Yet despite that, despite the FBI “most wanted” terrorist status and reward offer, despite the fact that “Jordan is at the very top of the league table for receiving taxpayer-funded foreign aid” from the U.S. – “despite all of this, she lives free in Jordan, not in hiding, a living icon of terror with toxic influence throughout the Arab world.”

“Against this background, the measures three U.S. administrations – Obama, Trump and Biden – have taken in lavishing support, concrete aid, a torrent of U.S. government cash and very generous compliments on the Hashemite Kingdom and its leadership simply baffle my wife and me,” Roth said. “Our child’s killer is living a life that makes a mockery of American justice.” 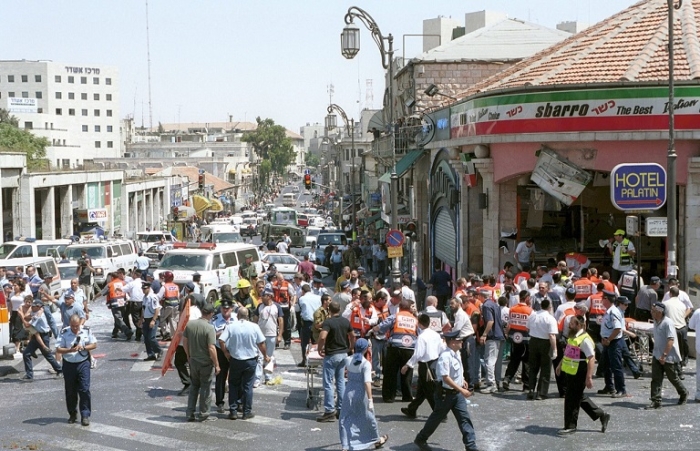 The aftermath of the suicide bombing at the Sbarro pizzeria in downtown Jerusalem on August 9, 2001. (Photo: State Department Rewards for Justice / Getty Images)

‘Allah be praised, it was great’

Tamimi, now in her early 40s, expressed no public remorse for her actions, but has boasted about them, telling a Jordanian newspaper days after her deportation, “I have never regretted what I have done, and if given another chance I’ll do it again.”

Tamimi would later recount to a Hamas TV station her reaction hours after the bombing. The interview was translated by the Middle East Media Research Institute.

As she made her way home on a bus ferrying other Palestinians, she said she heard reports on the radio of the bombing coming in, and was disappointed at first to hear that three people had been killed, as she had “hoped for a larger toll.”

“Two minutes later, they said on the radio that the number had increased to five. I wanted to hide my smile, but I just couldn’t,” she said. “Allah be praised, it was great. As the number of dead kept increasing, the passengers were applauding.”

Neither the U.S. Department of Justice, nor the Jordanian Embassy in Washington responded to written queries about the Tamimi case.