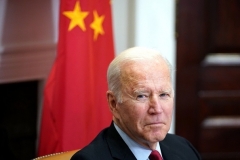 President Biden holds a virtual meeting with Chinese President Xi Jinping, from the Roosevelt Room of the White House on Monday night. (Photo by Mandel Ngan/AFP via Getty Images)

(CNSNews.com) – Hours after Chinese state media quoted President Xi Jinping as having warned President Biden during their virtual meeting that supporting Taiwanese independence was “like playing with fire,” Biden used the words “it’s independent” in connection with the island democracy.

He later walked back the apparent gaffe, saying “we’re not going to change our policy at all” and adding, “we are not encouraging independence.”

The remarks relating to one of the most volatile issues in U.S.-China relations came during the president’s visit to New Hampshire.

Speaking to reporters in Woodstock, N.H. shortly before 3:30 PM, Biden was asked if any progress on Taiwan had been made during Monday night’s meeting with Xi.

“Yes,” he replied. “We have made very clear we support the Taiwan Act [sic], and that’s it. It’s independent. It makes its own decisions.”

In Manchester, N.H. about 90 minutes later, a reporter asked Biden, “What happens next on Taiwan?” and he replied, “Nothing happens. We’re not going to change our policy at all.”

“Can you clarify what the policy is?” he was then asked. “Because you said today ‘independence,’ and in the past you said – ”

“No, no,” Biden interjected. “I said that they have to decide – ‘they’ – Taiwan. Not us. And we are not encouraging independence. We’re encouraging that they do exactly what the Taiwan Act [sic] requires, and that’s what we’re doing. Let them make up their mind.”

The 1979 Taiwan Relations Act (TRA) ties U.S. recognition of the PRC and the concurrent severing of diplomatic relations with Taiwan “to the expectation that the future of Taiwan will be determined by peaceful means.”

It commits the U.S. to provide the island with military aid and declares that the U.S. will “consider any effort to determine the future of Taiwan by other than peaceful means, including by boycotts or embargoes, a threat to the peace and security of the Western Pacific area and of grave concern to the United States.”

Another key policy document, President Reagan’s statement on arms sales to Taiwan in 1982, declares that “the Taiwan question is a matter for the Chinese people, on both sides of the Taiwan Strait, to resolve.”

A White House readout of the three-and-a-half hour meeting with Xi devoted just one sentence to the Taiwan dispute.

A senior administration official in a late-night background briefing described the Taiwan discussion as an “extended” one.

The official said Biden had been “very clear about the U.S. interest in ensuring that there is no unilateral changes to the status quo across the Strait and maintaining peace and stability in the Taiwan Strait, and was quite direct about his concerns about some of Beijing’s behaviors that he believes is at odds with both – with peace and stability across the Strait.”

The PRC’s account of the Taiwan portion of the discussion focused on Xi’s remarks.

The Xinhua state news agency said Xi had ascribed the tensions to Taiwanese leaders’ attempts to seek U.S. support for independence, and to attempts by some in the U.S. to use the Taiwan issue to “contain” China.

“Such moves are extremely dangerous, just like playing with fire,” Xinhua quoted Xi as telling Biden. “Whoever plays with fire will get burnt.”

It said Xi also told Biden that the PRC has “patience and will strive for the prospect of peaceful reunification [of China and Taiwan] with utmost sincerity and efforts.”

“That said, should the separatist forces for Taiwan independence provoke us, force our hands or even cross the red line, we will be compelled to take resolute measures,” he was quoted as telling the U.S. president.

Tuesday wasn’t the first time this year Biden has made comments on Taiwan that appeared to be out of step with carefully-balanced U.S. policy on the issue.

During a CNN town hall last month, host Anderson Cooper asked Biden, “Are you saying that the United States would come to Taiwan's defense if China attacked?” to which the president replied, “Yes, yes, we have a commitment to do that.”

Last August, Biden in an ABC News interview included Taiwan when referring to NATO and East Asian treaty allies Japan and South Korea in the context of mutual defense agreements.

“We made a sacred commitment to Article 5 [of the North Atlantic Treaty] that if in fact anyone were to invade or take action against our NATO allies, we would respond,” he said. “Same with Japan, same with South Korea, same with – Taiwan.”

A senior administration official said afterwards that U.S. “policy with regard to Taiwan has not changed.”