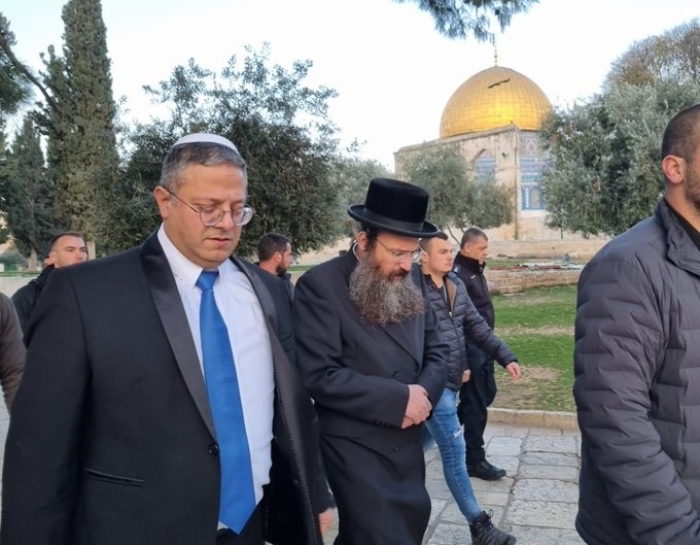 In a photo posted on his Twitter feed, Israeli police minister Itamar Ben-Gvir and his entourge are seen on the Temple Mount, with the Dome of the Rock in the backgroud. (Photo: Ben-Gvir/Twitter)

(CNSNews.com) – It was all over in 13 minutes, but an early morning, no-media visit Tuesday by Israel’s controversial new national security minister to the most hotly-contested religious site in Jerusalem attracted angry reactions from Islamic governments, while the U.S. State Department declared itself to be “deeply concerned.”

Accompanied by a security detail and entering through a minor side gate, Itamar Ben-Gvir visited the Temple Mount, an open-air compound whose security falls under his portfolio, and includes both the holiest site in Judaism and the third-holiest in Islam. Muslims call it Haram al-Sharif (Noble Sanctuary).

Despite an apparently deliberate attempt to keep it low-key, the visit quickly drew enraged reactions from Palestinian and Islamic leaders, some of whom decried what they called the “storming” of the al-Aqsa mosque.

Hamas, which had earlier threatened retaliation if Ben-Gvir visited the site, called it “blatant aggression” and “criminal behavior.”

“We affirm that our battle with this Zionist enemy and its extremist fascist government, in defense of our land, our people, our Jerusalem and our Aqsa, is continuing by all means and in all the arenas of the homeland,” it said.

A rocket fired from the Gaza Strip towards Israel fell short, landing inside the coastal enclave. Hamas, a U.S.-designated foreign terrorist organization, has ruled Gaza since seizing control during violent clashes with Palestinian Authority chairman Mahmoud Abbas’ Fatah faction in 2007. 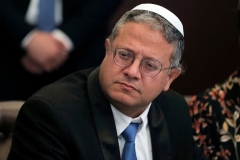 After his visit, Ben-Gvir posted a photo of him accompanied by a security detail on the Temple Mount, with a message referring to Hamas’ threats.

“The Israeli government of which I am a member will not surrender to a vile murdering organization. The Temple Mount is open to everyone, and if Hamas thinks that if it threatens me it will deter me, let them understand that times have changed. There is a government in Jerusalem!”

The U.S. State Department said it was “deeply concerned” by the visit, with spokesman Ned Price saying it “has the potential to exacerbate tensions and to provoke violence.”

Price recalled that “previous high profile visits” to the Temple Mount had exacerbated tensions, adding that “this is not an academic question.”

(After Ariel Sharon – then Israeli opposition leader, later prime minister – visited the Temple Mount in September 2000, Abbas’ predecessor Yasser Arafat accused him of defiling the al-Aqsa mosque. The incident triggered the so-called “al-Aqsa intifada” or uprising – years of suicide bombings, shootings and other attacks that cost more than 1,000 Israeli lives, while more than 4,000 Palestinians were killed.)

The administration’s stance drew sharp criticism from Sen. Ted Cruz (R-Texas), who charged in a statement that its “pathological obsession with undermining Israel is endangering the national security of America and our allies.”

“A visit by a minister from Israel’s government to a site inside Israel is not a change in any status quo arrangement, and it should not be controversial for a Jew to visit the holiest site in Judaism,” he said.

“The statements from the Biden White House and State Department, which suggest otherwise, will further destabilize the Middle East and risk inciting terrorism,” Cruz said. “They convince Palestinian officials that compromise is unnecessary because Democrat administrations will coerce our Israeli allies into making dangerous concessions.”

The Temple Mount, a 35-acre, open-air hilltop compound in Jerusalem’s Old City, is revered by Jews as the historical location of the biblical Temples. Known by Muslims as Haram al-Sharif (Noble Sanctuary), it is home to several mosques, including al-Aqsa, the third-holiest in Islam after the Ka’aba in Mecca and the Mohammed mosque in Medina, both in Saudi Arabia. 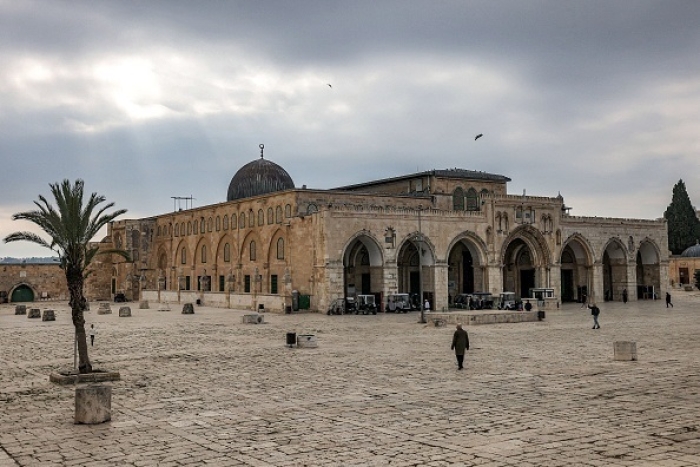 The al-Aqsa mosque, Islam’s third-holiest shrine, is located on the hilltop compound in Jerusalem called the Temple Mount – Judaism’s holiest site – and known by Muslims as Haram al-Sharif. (Photo by Ahmad Gharabli / AFP via Getty Images)

Due to the sensitivity of the location, Israeli governments have long limited Jewish visits to the site, and Jews are prohibited from praying there. Although it falls under Israeli sovereignty, it is administered by an Islamic trust linked to the kingdom of Jordan.

Ben-Gvir, an ultranationalist whose inclusion in Prime Minister Binyamin Netanyahu’s new government has troubled the Biden administration, has visited the Temple Mount numerous times in the past, but not as a cabinet minister.

His party, now a partner in the governing coalition, campaigned for changes to the arrangement that limits Jewish visits and forbids Jews to pray on the Temple Mount (a restriction he has described as racist.)  Netanyahu’s coalition platform, however, includes a stipulation that the status quo “with regard to the holy places” will be preserved.

Ben-Gvir did not overtly pray during his brief visit on Tuesday.

Price told the State Department briefing that the U.S. opposed any unilateral actions to change the status quo at the site. When asked, however, if the administration believed Ben-Gvir’s visit did in fact alter the status quo, he said it was not for the U.S. government to define or prescribe “what the historic status quo is.”

“That’s a question of history. It’s a question for the parties themselves,” including Jordan, which has the custodianship role, he said.

Price also said the administration took note of Netanyahu’s platform assurance on preservation of the status quo of the holy sites, and “we expect him to follow through on that commitment.”

Any suggestion that Tuesday’s visit altered the status quo was challenged by one of Ben-Gvir’s ministerial predecessors.  Gilad Erdan, who is now Israeli ambassador to the U.N., posted a photo of himself visiting the Temple Mount while serving in the same capacity as Ben-Gvir in 2017.

“A Jew visiting the holiest site in Judaism doesn’t deviate from the status quo,” tweeted Erdan. “Israel has maintained the status quo for many years, even though it discriminates against Jews & Christians who can only visit, not pray. Anyone who says differently jeopardizes security & stability.”

Ben-Gvir’s visit drew strong criticism from Islamic governments in the region, with Jordan’s foreign ministry spokesman describing it as a “break-in at al-Aqsa mosque and subsequent violation of its sanctity.”

Spokesman Sinan Majali also declared that the entire Haram al-Sharif – not just al-Aqsa – “is a place of worship for Muslims alone.”

Condemnation of the “storming” of al-Aqsa also came from Abbas’ spokesman and the Emirati foreign ministry, while Saudi Arabia called it a “provocative action” and Turkey’s foreign ministry said it deplored the “raid” on the mosque. The Arab League and Organization of Islamic Cooperation (OIC) secretariats both slammed the “incursion.”

The Council on American-Islamic Relations (CAIR) urged the Biden administration to “strongly condemn the Netanyahu government’s attempts to incite racial and religious conflict at one of the most sacred and sensitive places in the world.”