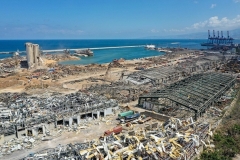 The destroyed port of Beirut, where a huge explosion last Tuesday devastated large swathes of the Lebanese capital. (Photo by AFP via Getty Images)

(CNSNews.com) – Hezbollah opposes the idea of an international inquiry into the devastating explosion in Beirut a week ago, stoking suspicion that the Iran-backed terrorist group worries an independent investigation may draw unwelcome attention to its alleged use of the port for smuggling weapons into Lebanon.

At least 158 people were killed and more than 6,000 injured in a pair of blasts at the city’s port, the largest of which sent pressure waves that destroyed or damaged buildings for miles around, leaving some 300,000 residents without homes.

Last Tuesday’s huge explosion has been attributed to 2,750 tons of ammonium nitrate, stored in a warehouse since being confiscated from a ship arrested during a port call in 2013.

But what caused the precursor explosion and fire that in turn detonated the ammonium nitrate remains a mystery, despite official claims promoting a “fireworks” theory.

“In the years 2018 and 2019, Israel found that Iran and the [Islamic Revolutionary Guard Corps] Qods Force have begun to advance the exploitation of the civilian maritime channels, and specifically the Port of Beirut, for this same purpose,” Israeli Ambassador Danny Danon told the council on July 23 last year.

“A civilian port,” he underlined. “The Port of Beirut is now the Port of Hezbollah.”

Lebanon’s U.N. Ambassador Amal Mudallali, without denying the accusations, told the council Israel may be trying to prepare the ground for an attack on Lebanon’s civilian infrastructure.

Earlier, Aoun, a close Hezbollah ally, firmly rejected popular calls for an international investigation, saying those demands were “aimed at covering up the truth.”

In a televised speech on Friday, Hezbollah leader Hassan Nasrallah made clear he wanted the investigation into the incident to be kept inside the country, calling for the Lebanese Army to oversee it.

Nasrallah also vehemently denied that his group had ever stored weapons or explosives at the port, or had any say in running, overseeing or controlling the port.

On Sunday, Defense Secretary Mark Esper told Fox News that early speculation about the cause of the blast included the possibility that it was “a Hezbollah arms shipment that blew up, maybe a Hezbollah bomb-making facility.”

“The bottom line is, we still don’t know.”

A U.S. Embassy cable cited by the New York Times on Monday stated that the cause of “the initial fire remains unclear – as does whether fireworks, ammunition or something else stored next to the ammonium nitrate might have been involved.”

Moshe Ya’alon, an Israeli lawmaker and former defense minister, claimed that a fire at a Hezbollah weapons depot at the port caused the ammonium nitrate stored nearby to detonate. He told a Saudi news outlet that Hezbollah has control over the port, and nothing moves through it without its knowledge.

Former Israeli military intelligence officer Mordechai Kedar theorized that the first of a series of explosions was likely caused by Hezbollah negligence.

“What probably happened on August 4 was an explosion of volatile and flammable materials that were incorrectly stored by Hezbollah for at least a day in a metal, non-airconditioned warehouse. As it is midsummer, temperatures are very high,” wrote Kedar, senior research associate at the Begin-Sadat Center for Strategic Studies at Bar-Ilan University in Tel Aviv.

“I believe missile-fuel fumes evaporated from a container and touched the hot wall or ceiling, where they ignited and caused a chain reaction of explosions.”

Apart from the weapons cache theory, some believe that Hezbollah may also be responsible for the fact the ammonium nitrate was stored at the port for so long.

The fertilizer, which is explosive when mixed with fuel oil or other fuels, has long been a common ingredient for terrorist bombs. These include bombs that have been blamed on Hezbollah, most notably the device that destroyed a Jewish community center in Buenos Aires in 1994, killing 85 people. Argentinian investigators blamed Hezbollah and the Iranian regime for that attack.

Bomb plots implicating Hezbollah and involving ammonium nitrate have also been exposed in several countries, including in Britain, Kuwait and Cyprus in 2015, and in Thailand in 2012.

On Monday, Lebanese Prime Minister Hassan Diab resigned amid protests by citizens angered by years of corruption and neglect. Aoun asked him and his cabinet to remain on in a caretaker capacity until a new government is formed.

Previous government-building attempts have been characterized by horse-trading among a political class dominated by former warlords from the civil war and blamed for decades of dysfunctional misrule. The process is hampered by a longstanding sectarian formula prescribing that the president must be a Maronite Christian, the prime minister a Sunni Muslim, and the parliament speaker a Shi’ite Muslim.

Notwithstanding its status as a terrorist militia – in violation of key U.N. Security Council resolutions – Hezbollah also operates as a political party, with lawmakers in parliament and ministers in the national cabinet.

Other parties have been too weak to resist, or have been co-opted by the influential Shi’ite organization.