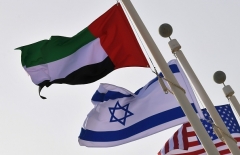 (CNSNews.com) – Building on the foundation of the normalization agreement brokered by the Trump administration last summer, Israel on Sunday opened an embassy in the United Arab Emirates, and the Gulf state’s cabinet approved the establishment of an embassy in Tel Aviv.

The progress came despite the coronavirus pandemic. Israel is currently in its third national lockdown, and an uptick in deaths attributed to COVID-19 prompted Prime Minister Binyamin Netanyahu on Sunday to announce a week-long shutdown of almost all flights in and out of the country.

Nonetheless, Israeli Ambassador Eitan Na’eh arrived earlier in Abu Dhabi, ready to begin work in a temporary facility while a permanent location is found, the foreign ministry said. It said the mission would “promote the full range of relations between the two countries in all areas, and expand ties with the Emirati government, economic bodies and the private sector, academic institutions, the media, and more.”

Over recent months thousands of Israelis have visited the UAE on direct flights, and the two nations have signed a number of accords aimed at stimulating trade and economic links.

Thanking the UAE cabinet for approving the decision to open an embassy in Tel Aviv, Israeli Foreign Minister Gabi Ashkenazi called it “an important decision that will facilitate the promotion of the warm ties between our countries and peoples. We look forward to receiving representatives of the UAE soon.”

The Emirati state news agency WAM confirmed the cabinet decision approving the embassy opening, but gave no indication of timing.

The UAE was the first of four Arab countries to agree to normalize relations with the Jewish state since last August – Bahrain, Sudan and Morocco followed. The series of historic breakthroughs upended the longstanding conventional wisdom about a comprehensive Israeli-Palestinian settlement being a prerequisite for broader Israeli-Arab rapprochement.

The Arab League has 22 members. Before the four agreements were secured in the space of less than four months last year, only two other Arab nations had taken similar steps since the establishment of the modern state of Israel in 1948 – Egypt in 1979 and Jordan in 1994.

Despite this, some critics of President Trump played down their significance, arguing for instance that they were not peace agreements per se, since the Arab countries had not been at war with Israel. (Sudan was the exception, sending troops to fight alongside other Arabs against the Israelis in the 1948 war of independence and the 1967 Six Day War. Sudan also dispatched an infantry brigade to fight in the 1973 Yom Kippur War but it didn’t reach the theater in time.)

President Joe Biden’s secretary of state nominee, Tony Blinken, did not appear to agree with the cynics when questioned during his Senate Foreign Relations Committee confirmation hearing last week, saying that the normalization agreements made Israel and the region safer.

“I applaud the work that was done to achieve them,” he said. “I think they have significantly advanced the security for Israel and for the countries involved. It opens new perspectives and prospects with regard to travel, to business, to trade, all of which is very, very positive. And I would hope that we have an opportunity to build on them going forward.”

An Israeli consulate-general is expected to open in the UAE’s Dubai within days, and Israel’s new embassy in Manama, Bahrain, began operating several weeks ago.

Progress has also been made with Morocco, with Israel’s cabinet on Sunday formally approving the normalization agreement.

“Together we are advancing direct flights between the countries, which will happen soon, as well as economic, commercial and technological cooperation and the opening of missions in the two countries,” said Netanyahu, commending Morocco’s King Mohammed VI for the cooperation.