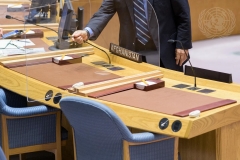 A U.N. official adjusts a microphone ahead of a Security Council meeting on Afghanistan this month. (Photo: UN Photo/Manuel Elias)

(CNSNews.com) – A nine-country committee will meet soon to consider an application by the Taliban to be given the Afghanistan seat at the United Nations, even though not one government has yet recognized the legitimacy of the regime set up by the terrorist group that seized power by force last month.

Critics spoke out in opposition Wednesday, urging both the U.N. and the Biden administration to resist the move.

“The Taliban shouldn’t be allowed to address the U.N.,” said former U.S. ambassador to the U.N. Nikki Haley. “They’re whipping women in the streets, ordering girls not to go to school, and murdering opponents. They haven’t changed. The Taliban is a terrorist group holding a country hostage, not the legitimate government of Afghanistan.”

Sen. Lindsey Graham (R-S.C.) and Rep. Mike Waltz (R-Fla.) said in a joint statement it was in the interest of the U.S. “that the Afghan Taliban not be legitimized by the international community because they are, and have been, terrorists.”

A similar message came from Chris Alexander, a former Canadian ambassador to Afghanistan, who said any U.N. member-state supporting the Taliban request for the U.N. seat would be “going rogue.”

“Terrorists do not deserve seats at the U.N., ever,” he said.

Less than two months ago, the Security Council made clear, as it had done previously on a number of occasions, that it does “not support the restoration of the Islamic Emirate.”

But this week, the “Islamic Emirate” asked U.N. Secretary-General Antonio Guterres to permit its foreign minister, Amir Khan Muttaqi, to address the General Assembly next Monday. Afghanistan is the last delegation scheduled to speak during the week-long high-level opening of the new session.

Muttaqi is one of more than half of the members of the “interim” cabinet named by the Taliban regime who are on the U.N. Security Council consolidated list of sanctioned terrorists, and as a result are subject to an assets freeze and travel ban. 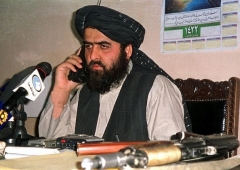 Many of the current Taliban cabinet posts are held by men who were in the previous regime. They include Amir Khan Muttaqi, now foreign minister, but education minister when the fundamentalist group controlled most of Afghanistan in 1996-2001.

In a letter to Guterres, Muttaqi said the ousted government of President Ashraf Ghani was no longer recognized by member-states and so the sitting Ghani-appointed ambassador, Ghulam Isaczai, should no longer be representing Afghanistan at the world body. Ghani fled Afghanistan as Taliban fighters entered Kabul in mid-August.

The Taliban has also named one of its spokesmen, Suhail Shaheen, as its nominee for ambassador to the U.N.

Shaheen told the Associated Press on Wednesday that the Taliban has “all the requirements needed for recognition of a government. So we hope the U.N. as a neutral world body recognize the current government of Afghanistan.”

Isaczai has also written to Guterres, and both letters have been lodged with a General Assembly “credentials committee,” which is established at the start of every annual session to consider member-state credential issues.

The committee generally meets in November each year, and even if it convenes earlier this year it not likely to make a decision before Monday’s scheduled speaking slot for Afghanistan.

“I don’t expect this issue to be resolved within high-level week,” a senior State Department told reporters in a background briefing. “The credentials committee generally has taken some time [to deliberate on disputes].  I’m not going to predict how long it’s going to take this time.”

The last time the Taliban seized control of most of Afghanistan, in 1996, the credentials committee repeatedly deferred a decision on the country’s representation at the U.N.  As a result, the seat continued to be held by the previous government, right through the Taliban era and beyond its toppling by U.S.-led forces in late 2001.

This time, not a single government has formally taken that step – although Pakistan, the Taliban’s historical mentor and ally, is evidently trying to mobilize countries in the region to join it in doing so in a collective move.

“So far, the international community has remained united not to recognize [the] so-called caretaker government of the Taliban,” Mahmoud Saikal, who served as Afghanistan’s ambassador to the U.N. from 2015-2018, told the BBC on Wednesday. “No country in the world has done that.”

Saikal, also a former deputy foreign minister, conceded that the decision was up to the credentials committee, but underlined that no government has recognized the Taliban regime’s legitimacy, and added that it was also suffering from a lack of legitimacy at home.

In a subsequent tweet, Saikal noted that the credentials committee will among other things have to consider the issue of the sanctions against blacklisted Taliban leaders, as well as “their history of genocide, war crimes, ethnic cleansing and crimes against humanity.”

Secretary of State Antony Blinken took part Wednesday in an Afghanistan-focused meeting of G20 foreign ministers and said afterwards that the “international community is united in its expectations for the Taliban to adhere to their commitments.”

“The Taliban must hear a united international message regarding counterterrorism, humanitarian access, human rights, safe passage for those who want to leave Afghanistan, and inclusive governance,” tweeted State Department spokesman Ned Price. “A G20 meeting at UNGA on Afghanistan advanced this effort.”