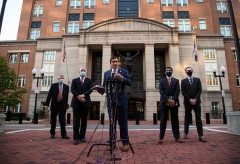 U.S. Attorney G. Zachary Terwilliger, flanked by colleagues, speaks to the press outside the U.S. District Court in Alexandria, Virginia, on Wednesday after the first hearing of the two ISIS jihadists. (Photo by Nicholas Kamm/AFP via Getty Images)

(CNSNews.com) – As two Muslim Londoners accused of having key roles in ISIS’ hostage-taking and killing of four Americans in Syria made a first court appearance in the U.S. District Court in Alexandria, Virginia on Wednesday, a senior Department of Justice official warned terrorists everywhere: “You will never live in peace. You will be pursued to the ends of the earth.”

The families of American journalists James Foley and Steven Sotloff and American aid workers Kayla Mueller and Peter Kassig welcomed the news, thanking Attorney General Bill Barr in particular for his efforts in getting Britain to provide crucial evidence needed by prosecutors in their effort to hold Alexanda Kotey, 36, and El Shafee Elsheikh, 32, accountable for their alleged crimes.

Litigation in Britain was holding up proceedings, but Barr in a letter to Britain’s home secretary in August undertook not to seek the death penalty in the event of conviction, while also warning that unless the evidence was provided by October 15, the U.S. would hand over Kotey and Elsheikh – then in U.S. military custody in Iraq – for trial in that country. The Iraqi justice system is not held in high regard in Western judicial and human rights circles.

The two men were among four British nationals who joined ISIS and became notorious for their treatment of foreign captives. Nicknamed “The Beatles” for their British accents, they were led by Mohamed Emwazi, who was killed in a U.S. drone strike in Raqqa in late 2015. The fourth man, Aine Davis, was convicted on terror charges and imprisoned in Turkey in 2017.

Emwazi was recorded on video beheading journalists Foley and Sotloff in August and September 2014 respectively. Kassig, a former U.S. Army Ranger working for a humanitarian organization, was beheaded in November 2014, with ISIS releasing a video showing his severed head.

Mueller was kidnapped in August 2013 and held by ISIS terrorists for 18 months – during which time she was sexually abused by ISIS leader Abu Bakr al-Baghdadi – until her death in early 2015 in still-unclear circumstances.

Families of the four ISIS victims said the trial in the U.S. of the two terrorists “will be the first step in the pursuit of justice for the alleged horrific human rights crimes against these four young Americans, who saw the suffering of the Syrian people and wanted to help, whether by providing humanitarian aid or by telling the world about the evolving Syrian crisis.”

“We are hopeful that the U.S. government will finally be able to send the important message that if you harm Americans, you will never escape justice. And when you are caught, you will face the full power of American law.”

In Washington on Wednesday, Assistant Attorney General for National Security John Demers made the same point.

“Either way, you will never live in peace. You will be pursued to the ends of the earth,” Demers said. “No matter how long it may take, we will never forget, and we will never quit.”

According to the indictment, Kotey and Elsheikh worked closely with ISIS media spokesman Abu Muhammed al-Adnani, who reported directly to Baghdadi.

“Kotey, Elsheikh, and Emwazi met repeatedly with Adnani concerning the hostage-taking scheme and other matters,” the Justice Department said. “Between November 2012 and February 2015, Kotey, Elsheikh, Emwazi, and other ISIS fighters committed acts inflicting pain, suffering, cruelty and mistreatment on American, British, and other hostages in captivity.“

Adnani, a Syrian terrorist, was killed in a U.S. airstrike in August 2016. Baghdadi himself was killed during a U.S. special forces raid on a compound in northwestern Syria in October 2019. The special forces mission was codenamed in honor of Kayla Mueller. (Kayla Mueller’s parents, Marsha and Carl, were guests of Vice President Mike Pence at Wednesday’ night’s vice presidential debate in Utah.)

If convicted, Kotey and Elsheikh face a maximum penalty of life in prison.