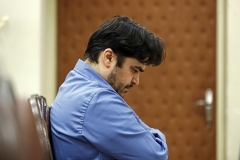 (CNSNews.com) – Piqued by rare European criticism, Iran’s foreign ministry on Sunday summoned the German and French ambassadors to complain about their protests over the execution of a Paris-based dissident journalist, accusing their governments of siding with terrorists.

Earlier, the French foreign ministry had called Saturday’s hanging of Ruhollah Zam “a barbaric and unacceptable act that goes against the country’s international commitments.”

Criticism also came from the European Union, which has been trying to salvage the Joint Comprehensive Plan of Action (JCPOA) nuclear deal since President Trump withdrew in 2018 and ramped up economic pressure on the regime. The E.U. has not imposed new sanctions against Iranian regime officials for human rights abuses since March 2013.

The E.U. underlined its “irrevocable opposition to the use of capital punishment under any circumstances,” and said it was “imperative for the Iranian authorities to uphold the due process rights of accused individuals and to cease the practice of using televised confessions to establish and promote their guilt.”

The head of the Iranian ministry’s department for European affairs told French Ambassador Philippe Thiébaud and German Ambassador Hans-Udo Muzel that the criticism was viewed as “anti-Iran” and interference in its internal affairs.

He also accused European countries of tolerating “elements who provoke violence and acts of terror,” a reference to the exiled National Council of Resistance of Iran (NCRI)/Mujahideen-e Khalq (MEK) opposition group. (An Iranian diplomat is currently on trial in Belgium, together with three other Iranian dual nationals, accused of a plot to bomb an NCRI mass rally in France in 2018.)

In other reaction, organizers postponed a scheduled Europe-Iran Business Forum due to have started Monday, involving 3,300 participants from 40 countries and featuring the French, German, Italian and Austrian ambassadors to Iran.

The online event, which will go ahead at a later stage, had been described as “an opportunity for European and Iranian firms to hear from the ambassadors and to better understand the nature of the European commitment of the nuclear deal and to sustaining commercial relations with Iran.”

Some Western critics of the regime responded skeptically to the European reaction.

Omri Ceren, national security advisor to Sen. Ted Cruz (R-Texas), remarked on Twitter that France’s policy relating to the JCPOA was “is objectively aimed at boosting the Iranian regime that France is condemning.”

Foundation for Defense of Democracies CEO Mark Dubowitz commented that the forum organizers “will postpone it to another date so that it doesn’t take place right after the murder of an French-Iranian dissident journalist. Of course with the regime in Iran, they will never know when the next regime-sponsored murder takes place.”

Alinejad called the forum postponement a “tiny victory,” and added, “Now, it’s time for the E.U. to recall their ambassadors until all dual nationals are freed.”

Zam was hanged just four days after the country’s supreme court upheld his death sentence for “spreading corruption on earth,” (mofsed-e-filarz), a broadly-defined capital offense under the Iranian legal system.

Zam, who ran the popular AmadNews news channel on the messaging app Telegram, escaped from Iran amid mass protests in 2009 and was granted residence in France, where his wife and two daughters live. During a visit to Iraq last year, he was abducted by Islamic Revolutionary Guard Corps (IRGC) agents under still-unclear circumstances – but allegedly involving Iraqi collusion – and was next seen in Iranian custody, “confessing” on state television.

Zam was accused of fomenting protests that erupted inside Iran in late 2017 – initially spurred by rising prices and economic concerns – and which have continued sporadically ever since, prompting a violent crackdown by the regime.

Kayhan, a hardline daily whose editor is appointed by supreme leader Ayatollah Ali Khamenei, said on Sunday Zam was “a notorious terrorist who after a fair trial and in view of documented evidence was convicted for causing corruption on earth, among other crimes against the nation.”

Kayhan claimed he had been captured by the IRGC “through an intricate operation outmaneuvering the intelligence services of certain Western countries, especially France, for which he used to spy.”

The NCRI’s secretariat condemned the execution, urging the U.N. and E.U. to do so too, and said the “heinous crime” underlines the need for tough sanctions against the regime “for its brutal and systemic human rights violations, massive, arbitrary, and extrajudicial executions.”

“Engulfed by deadly domestic and international crises, Iran's clerical regime carries out such criminal executions in a bid to create an atmosphere of terror, to intimidate its internal factions, and to thwart the eruption of popular uprisings,” the opposition movement said. “The prospects of another uprising, especially after the November 2019 uprising, represents an ever-present nightmare in so far as the religious fascism ruling Iran is concerned.”

“But repression, torture, and execution cannot save this decadent and moribund regime from inevitable collapse. Khamenei, [President Hassan] Rouhani, [judiciary head] Ebrahim Raisi, and other officials of this regime must be held accountable for each one of their murders and crimes.”

“Utterly heartbreaking,” said Center for Human Rights in Iran board member Nazanin Boniadi of the news of Zam’s death. “The world must unite in condemning the Islamic Republic for such abhorrent crimes against humanity. Because what we don’t condemn, we normalize.”

The Iran Human Rights Documentation Center also called on the international community to condemning the execution “in the strongest possible terms.”

Diana Eltahawy of Amnesty International said the execution “shows the extent of the Iranian authorities’ brutal tactics to instill fear and deter dissent.”

Human Rights Watch researcher Tara Sepehri Far said the regime “has weaponized the cruel and inhumane use of the death penalty as a tool of repression.” She also called on authorities in Iraq to “clarify whether its security forces enabled this abuse by arresting and returning Zam to Iran.”