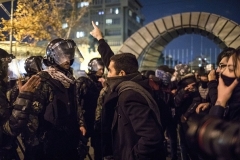 Iranian riot police in stand off with protestors outside a Tehran university last January. (Photo by AFP via Getty Images)

(CNSNews.com) – Iranian Foreign Minister Javad Zarif used his Twitter account on Monday to compare the death of George Floyd to U.S. sanctions against the regime he represents.

In an incident that has sparked mass protests across the U.S., Floyd, handcuffed behind his back and lying on the ground, died after a white policeman knelt on his neck during an arrest in a Minneapolis city street last week. Four officers were fired, and one is facing third-degree murder and second-degree manslaughter charges.

In his post Monday, Zarif likened the arresting officer’s treatment of Floyd to the Trump administration’s “maximum pressure” policy – the re-imposition of U.S. sanctions designed to bring about a change in the Iranian regime’s belligerent conduct at home and across the region.

“The ‘knee-on-neck’ technique is nothing new: Same cabal – who’ve admitted to habitually ‘lie, cheat, steal’ – have been employing it on 80M Iranians for 2 yrs, calling it ‘maximum pressure,’” Zarif tweeted. “It hasn't brought us to our knees. Nor will it abase African-Americans.”

The “lie, cheat, steal” reference was a swipe at Secretary of State Mike Pompeo, a former Central Intelligence Agency director who during an event on a Texas campus in April 2019 made a light-hearted comment about the CIA training agents to lie, cheat and steal.

Pompeo, who leads the administration’s foreign policy and is a vocal critic of the regime, has clashed frequently in social media forums with his Iranian counterpart.

In another tweet, posted over the weekend, Zarif made a point about racism – and took another dig at Pompeo.

“Some don’t think #BlackLivesMatter,” he tweeted. “To those of us who do: it is long overdue for the entire world to wage war against racism. Time for a #WorldAgainstRacism.”

In the most recent wave, which was sparked late last year by a fuel price hike but in time broadened into anti-regime dissent, as many as 1,500 people were killed when state security forces cracked down, with thousands more injured and arrested.

A spokesman for Zarif’s ministry on Monday condemned law enforcement authorities in the U.S. for what he called the violent suppression of peaceful protests that erupted after Floyd’s death.

Protests in a number of cities have degenerated into looting and vandalism, prompting authorities to announce curfews and President Trump to recommend that governors deploy the National Guard to restore order.

Foreign ministry spokesman Abbas Mousavi drew no distinction between genuine demonstrations against racism and destructive mayhem which police are trying to quell.

“We deeply regret to see the American people, who peacefully seek respect and no more violence, are suppressed indiscriminately and met with utmost violence,” said spokesman Abbas Mousavi.

“To the American people: The world has got heard your outcry over the state of oppression,” he said. “The world is standing with you. The American regime is pursuing violence and bullying at home and abroad.”

The Iranian regime likes to portray itself as a natural ally of black Americans, pointing back to Ayatollah Ruhollah Khomeini’s instruction in 1979 that African-Americans among the U.S. hostages seized during the Islamic revolution should be released on the grounds that “blacks for a long time have lived under oppression and pressure in America.”