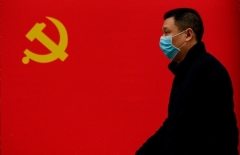 A man walks past a Chinese Communist Party flag in Wuhan in March. (Photo by Noel Celis/AFP via Getty Images)

(CNSNews.com) – Weeks after the Democrats abruptly withdrew from the proposed initiative, the House Republican leadership on Thursday announced the launch of a task force to examine the threats posed to the U.S. by the Communist Party of China, including those associated with the coronavirus pandemic.

While the task force for now will comprise Republicans only, Minority Leader Kevin McCarthy (R-Calif.) said the door remained open for Democrats to take part, and expressed the hope that they would.

“I invite the Democrats to join with us.” he told a briefing. “There was one moment in time they said yes. A few months ago they said no. I would say there was no more important time now, to join with us together, to work as one nation as we face these challenges.”

McCarthy said he does not know why the Democrats pulled out of the plan just before the scheduled announcement in February, after having already named the Democrats that were to have been on the envisaged bipartisan task force. In a tweet Thursday, he said they “bailed with no explanation.”

“I’m not sure why [Democrats withdrew] but given what has now transpired with this virus, the lies and what China has done, it’s more important now than ever that they join with us,” he said at the briefing. “But if they will not, we will go alone.”

It will meet regularly to be briefed by experts and discuss recommendations. A report, including legislative recommendations, will be released publicly by the end of October. 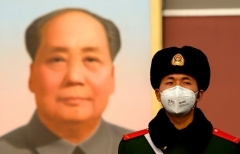 The most immediate focus will be the coronavirus pandemic, which began in Wuhan late last year and spread rapidly across the globe, now blamed for more than 269,000 deaths and economic turmoil whose effects will be felt for years to come.

“One thing has become very clear,” McCarthy said at the briefing. “China’s cover-up directly led to this crisis. The Communist Party of China hid the seriousness of this disease, led a propaganda campaign blaming the U.S., using their [medical] supplies to exert influence, and continue to refuse international experts to investigate what happened.”

The Trump administration accuses the CCP of attempting to cover up the outbreak early on, spreading disinformation including trying to blame the U.S. military for the virus, and to this day refusing to release data that could help to determine the origin of the outbreak, and assist in the development of therapies and vaccines. A growing number of other concerned Western governments are also calling for investigations.

While Republicans in Congress have forcefully questioned China’s handling of the outbreak, many Democrats have directed their criticism at the Trump administration’s response to the crisis at home.

On other issues, Democrats have been vocal critics of Chinese policies, with Speaker Nancy Pelosi especially outspoken during months of protests in Hong Kong against the territory’s Beijing-backed government last year.

In a tweet on Thursday, Rep. Jim McGovern (D-Mass.), who chairs the bicameral Congressional-Executive Commission on China, charged that the new Republican-led task force was “designed to divert attention from President Trump’s coronavirus response failures.”

Proposals for the task force were under discussion long before the COVID-19 outbreak, however. Washington Post columnist Josh Rogin, who broke the story before McCarthy announced the launch, reported that McCarthy and Pelosi had discussed the plan as long ago as last June.

Beyond the pandemic, the task force will examine other aspects of the CCP’s behavior, including influence operations in the U.S. and elsewhere, economic coercion and monopolization of critical supply chains, efforts to gain technological advantage in areas like 5G, and a drive to obtain leadership positions and change norms at international institutions.

McCaul, who will chair the group, described China under the CCP as the “most consequential foreign policy challenge of this generation.”

“Not only do we have to hold the CCP accountable for their role in the spread of coronavirus, the United States must take bold action to address the CCP’s malign agenda and better compete with China on the world stage,” he said in a statement.