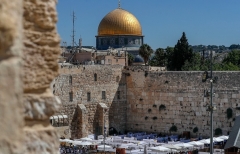 The Temple Mount in Jerusalem, with the Dome of the Rock mosque in the center and the Western Wall. (Photo by Ahmad Gharabli/AFP via Getty Images)

(CNSNews.com) – As Jews around the world celebrate a holiday marking the rededication of the Jewish Temple almost 2,200 years ago, the U.N. General Assembly on Wednesday passed a resolution that refers to the Jerusalem hilltop where that Temple stood – the holiest site in Judaism – solely by its Islamic name.

Ahead of the vote, U.S. representative Richard Erdman objected to a text that referred to Haram al-Sharif, the Islamic name for the site, but not the Temple Mount.

Terminology that includes both – “Haram al-Sharif/Temple Mount” – he said, “recognizes the shared and diverse history of the holy site.”

“The omission of this inclusive terminology is of real and sincere concern. It is morally, historically, and politically wrong for the members of this body to support language that denies both the Jewish and Muslim connections to the Temple Mount and Haram al-Sharif.”

Israeli permanent representative Gilad Erdan called it “absurd” that the text called for the maintenance of the status quo in Jerusalem, even as the resolution essentially did the opposite.

“By referring to the holiest site in Judaism, the Temple Mount, only by its Muslim name, the resolution is itself changing the status quo,” he said.

“A resolution about Jerusalem that does not refer to its ancient Jewish roots is not an ignorant mistake but an attempt to distort and rewrite history,” he said.

“The eternal bond between the Jewish people and our capital will never be erased.”

Erdan was scathing of countries that planned to vote in favor of the text.

“By voting in favor of these resolutions you are directly contributing to prolonging this conflict,” he said. “By supporting this narrative of lies you embolden the Palestinians to continue boycotting any negotiations and rejecting any compromises.”

During the debate, which also dealt with two other resolutions condemning Israel, numerous speakers accused the Jewish state of violations of international law, with the Palestinian representative leveling charges of “colonization” and “apartheid” and Jordan’s delegate alleging “aggressions” against the Al-Aqsa mosque.

The Cuban delegate condemned the U.S. for recognizing Jerusalem as the capital of Israel. President Trump took that step in December 2017, followed five months later by the relocation of the U.S. Embassy from Tel Aviv to Jerusalem.

Other speakers, including the representatives of the Assad and Maduro regimes, slammed the U.S. over its support for Israel.

The Temple Mount is one of the most religiously sensitive sites on earth, a hilltop platform roughly 35 acres in size that was the location of the ancient biblical Temples and is home to the Al-Aqsa mosque, Islam’s third-holiest site.

Although under overall Israeli sovereignty since 1967, Israeli governments since then have ceded its administration to an Islamic trust, with the kingdom of Jordan having a special oversight role.

The earliest of the biblical Temples was built by King Solomon almost 3,000 years ago, as recounted in the Old Testament books of 1 Kings and 2 Chronicles.

It was destroyed by the Babylonians around 500 years later. The second Temple, built on the site by the decree of Cyrus and improved later by Herod – the sanctuary in which Jesus taught – was razed by the Romans in 70 AD.

Muslims conquered Jerusalem in the 7th century and mosques were subsequently built on the site, which Muslims call al-Haram al-Sharif (“Noble Sanctuary”).

One of them, al-Aqsa, is revered as the third holiest site in Islam, based on the legend that Mohammed stopped there during his “night journey” from Mecca to heaven. He is said to have tethered his winged steed, al-Buraq, at the site before leading prayers with “Islamic prophets” including Adam and Noah.

Seven centuries before Mohammed was born, Jewish rebels launched a campaign against a Greek king, Antiochus IV Epiphanes, who had defiled the Temple with pagan worship. The Maccabees captured Jerusalem, and cleansed and rededicated the Temple – the actions celebrated during Hanukkah each year.