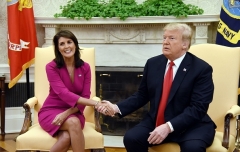 President Trump and Nikki Haley in the Oval Office on the day she resigned as ambassador to the U.N. (Photo by Olivier Douliery/AFP/Getty Images)

(CNSNews.com) – Officials serving in the administration are not free to push their “personal agenda” if they do not like President Trump, former U.S. ambassador to the United Nations Nikki Haley said this week, arguing that “we have one president at a time, and that president attained his office by the choice of the American people.”

Speaking at an American Enterprise Institute event in Washington, where she received the conservative think tank’s Irving Kristol Award, Haley recalled serving in the Trump administration “alongside colleagues who believed that the best thing to do for America was to undermine and obstruct the president.”

“Some wrote about it anonymously in The New York Times,” she said, evidently referring to the provocative September 2018 op-ed entitled “I Am Part of the Resistance Inside the Trump Administration.”

“Others just did it,” Haley added.

“The president was the choice of the people, in accordance with our founding charter. No policy disagreement with him, no matter how heartfelt, justifies undermining the lawful authority that is vested in his office by the Constitution.”

“For those who don’t like the president, they are free to protest him – and many do,” Haley continued. “But if you serve in the administration, you are not free to push your personal agenda. What’s at stake is not President Trump’s policies. What’s at stake is the Constitution.”

“But if we are a country that lives by the rule of law, we must all accept that we have one president at a time, and that president attained his office by the choice of the American people.”

The inquiry has heard testimony from numerous present or former administration officials, many of them with or previously with the State Department.

Some defenders of the president have charged that among those deposed are some with partisan agendas.

Acting White House chief of staff Mick Mulvaney on October 17 described those testifying as “a group of mostly career bureaucrats who are saying, ‘You know what? I don’t like President Trump’s politics, so I’m going to participate in this witch hunt that they’re undertaking on the Hill.’”

Secretary of State Mike Pompeo, asked later about those remarks, said he disagreed with that assessment.

“I have a different view,” he said. “My view is that each of us has a solemn responsibility to defend the Constitution and to speak the truth. I said this the other day. I hope those officers who go to Capitol Hill will speak truthfully, that they’ll speak completely.”

(Pompeo also criticized as “unfair in the nth degree” the process being pursued by the House Democratic leadership, and said House Intelligence Committee chairman “Adam Schiff ought to be embarrassed by the kangaroo court that he’s running.”)

Haley, a Republican, served as governor of South Carolina from 2011 to 2017, and as an outspoken ambassador to the U.N. from 2017 until the end of last year.

In February she founded Stand for America, an advocacy group “dedicated to supporting public policies that strengthen America’s economy, culture, and national security.” Supporters and detractors on social media periodically raise the prospect of a presidential or vice presidential run in 2024.

AEI’s annual Irving Kristol Award is given to recipients who, it says, “have made exceptional practical and intellectual contributions to improve government policy, social welfare, or political understanding.” Established in 2002, it is named for AEI senior fellow Irving Kristol, who died in 2009.