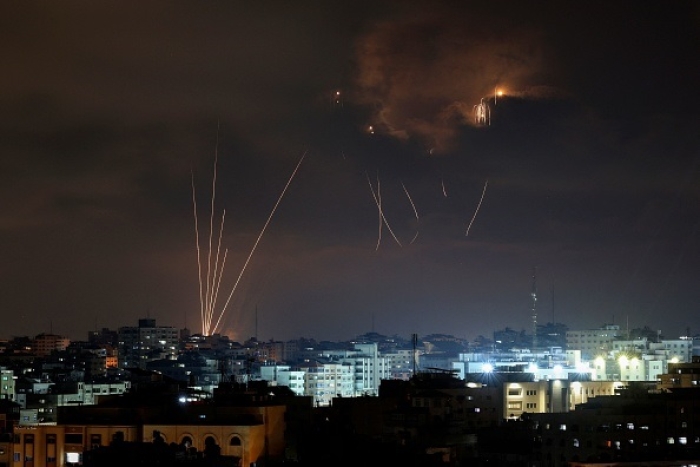 Rockets fired by Palestinian terrorists from Gaza City into the night sky, where some are intercepted and destroyed by the Israeli Iron Dome system. (Photo by Mohammed Abed /AFP via Getty Images)

(Update: In a statement on Sunday night President Biden welcomed the ceasefire, reiterated U.S. support for Israel’s “right to defend itself against attacks,” and called for investigations into civilian casualties in Gaza, “whether by Israeli strikes against Islamic Jihad positions or the dozens of Islamic Jihad rockets that reportedly fell inside Gaza.”)

(CNSNews.com) – A Egyptian-mediated ceasefire took effect on Sunday night after three days of fighting between rocket-firing terrorists in Gaza and the Israeli military killed more than 30 people, an episode that attracted strong criticism from U.N. officials, focused almost entirely on condemning Israel.

The Israeli Defense Forces (IDF) operation was directed at the Iranian regime-backed Palestinian Islamic Jihad (PIJ), rather than its better-known and larger ally, Hamas, which controls the Gaza Strip but kept out of the fighting.

Two senior terrorists were targeted and killed. PIJ said Taysir al-Jabari was the commander of its military wing, the Al-Quds Brigades, in the northern Gaza region. Khaled Mansour was a founder of the brigades and its commander in the southern Gaza region. The IDF accused Jabari of having “planned and promoted attacks against Israeli civilians and IDF soldiers using anti-tank launchers.”

The flareup began last week after the IDF arrested Bassem al-Saadi, the PIJ’s leader in the West Bank, during a night-time raid in Jenin, accusing him of building a significant terrorist operation in the area.

(A wave of terror attacks earlier this year that killed 17 Israelis and two Ukrainians were linked in part to Jenin, sparking ongoing security operations in the area.)

PIJ then threatened rocket attacks in revenge for Saadi’s arrest. “We have every right to bomb Israel with our most advanced weapons, and make the occupier pay a heavy price,” a top PIJ official in Gaza warned. “We will not settle for attacking around Gaza, but we will bomb the center of the so-called State of Israel.”

Israelis in the south took to bomb shelters, and the IDF on Friday launched air strikes in what it described as a “preemptive operation” to thwart planned attacks.

By Sunday morning, more than 600 rockets had been fired from Gaza toward southern Israel, many of them intercepted by the Iron Dome air defense system.

The IDF said a number of rockets fell short, landing inside Gaza – including in one case on Saturday in Jabaliya, where according to Palestinian accounts five people were killed, four of them children.

According to the Hamas-run health ministry in Gaza, at least 31 Palestinians, including six children, had been killed in the violence.

It did not say how many of those were affiliated with terrorist groups, or how many casualties were caused by rockets failing to make the border and landing inside Gaza. The IDF claimed at least nine deaths, including those of the four children, were the result of PIJ rockets falling short.

Early during the flare-up, the U.N.’s top official dealing with the Israeli-Palestinian issue, Tor Wennesland, issued a statement expressing concern about the escalation, “including the targeted killing today of a Palestinian Islamic Jihad leader [Jabari] inside Gaza.”

The statement drew a critical response from Israeli Ambassador to the U.N. Gilad Erdan.

“While the Palestinian Islamic Jihad is launching missiles at Israeli civilians, the U.N. envoy expresses ‘deep concern’ for the neutralization of a senior terrorist behind an imminent attack on Israelis,” he tweeted.

“Will he also express deep concern over the neutralization of al-Zawahiri?” he wondered, in reference to al-Qaeda leader Ayman al-Zawahiri, killed in a CIA drone strike in Kabul last weekend.

“For how long will the U.N. continue making false immoral comparisons between a democracy that abides by international law, and designated terror organizations committing war crimes by deliberately targeting civilians?” Erdan said. “These comparisons only incentivize terrorists to continue their attacks.” 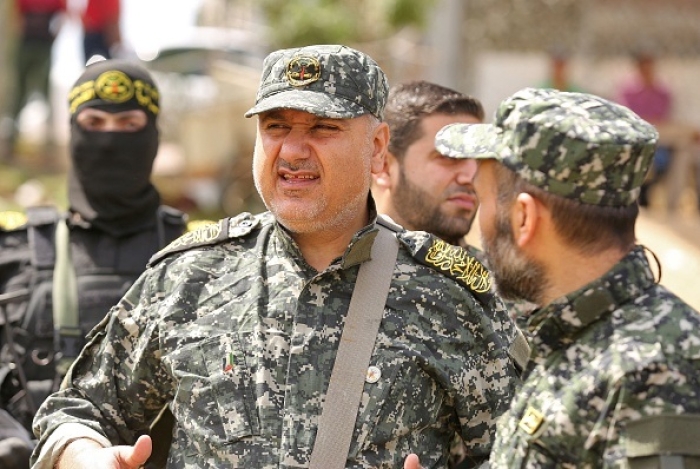 Taysir al-Jabari, the Palestinian Islamic Jihad commander killed in an IDF airstrike in Gaza on Friday. (Photo by -/AFP via Getty Images)

Wennesland wasn’t the only U.N. official to weigh in. The Human Rights Council-appointed “special rapporteur on the occupied Palestinian territories,” Francesca Albanese, condemned the airstrikes, saying on Twitter that as international law only allows the use of force in self-defense, the Israeli operation was “a flagrant act of aggression. Illegal. Immoral. Irresponsible.”

In another tweet – almost 36 hours later – Albanese acknowledged the firing of hundreds of rockets towards Israel, but then also once criticized Israel.

“Indiscriminate rocket fire from Gaza is no acceptable response to Israel’s unlawful bombings, because it harms civilians and it is therefore unlawful too,” she said. “This should not obscure Israel’s responsibility for maintaining its violent 55yo occupation and 15yo blockade of Gaza.”

The Damascus-headquartered PIJ is a U.S.-designated foreign terrorist organization and, like Hamas, it is sponsored by the regime in Tehran, receiving some $30-$40 million a year, according to expert estimates.

According to the State Department PIJ, again like Hamas, “is committed to the destruction of Israel and to the creation of an Islamic state in historic Palestine, including present-day Israel.”

Its terrorist attacks over the years have included large-scale suicide bombings, gunfire attacks, and rocket and mortar attacks.

During the previous upsurge of violence in the area – an 11-day conflict between the Israeli military and rocket-firing PIJ and Hamas terrorists in May last year – the PIJ in a video clip said rockets it had fired into the Israeli city of Ashkelon included Iranian-supplied “Badr-3” projectiles. It praised “the Islamic Republic in Iran, which has been generous with us in every aspect.”

In a statement on Sunday, Nakhalah praised the “martyrs” and his movement’s achievements in bringing “all the cities of the enemy within the range of the resistance’s missiles.”

In reference to the ceasefire, he said, “If the enemy does not abide by what we agreed on through the Egyptian mediator, we will resume fighting again. And Allah will do with us what he wills.”