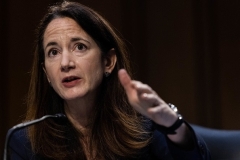 (CNSNews.com) – Russian President Vladimir Putin likely believes that, despite setbacks to his military goals in Ukraine, he will be able to hold out longer than Ukraine and its Western backers, Director of National Intelligence Avril Haines said on Tuesday.

She cited the economic impact of the crisis, including rising energy prices.

Haines told the Senate Armed Services Committee the U.S. intelligence community assesses that Putin wants to capture the Donbass in the east, and consolidate the “land bridge” his forces have established linking Russian-annexed Crimea to the Donbass.

But there were also “indications,” she continued, that he hopes to push out the land bridge along Ukraine’s Black Sea coast to join up with Transnistria, the Moscow-backed breakaway region of Ukraine’s southwestern neighbor, Moldova – a move that would require the capture of the major port city of Odesa.  Such a land bridge, if achieved, would completely cut off Ukraine’s access to the sea.

Haines said the IC did not believe Russia would be able to extend control over a land bridge stretching to Transnistria and including Odesa, “without launching some form of mobilization.”

And while it was “increasingly unlikely” that Russian forces would be able to establish control over the Donbass oblasts of Luhansk and Donetsk and a buffer zone around them in the coming weeks, she said, “Putin most likely also judges that Russia has a greater ability and willingness to endure challenges that his adversaries.”

“And he is probably counting on the U.S. and E.U. resolve to weaken as food shortages, inflation and energy prices get worse,” Haines added.

Looking ahead, she said that since both Russia and Ukraine both believe that they can make progress militarily “we do not see a viable negotiating path forward, at least in the short term.”

Other key points in Haines’ testimony relating to Russia’s war in Ukraine included the view that the Kremlin is using rhetoric about nuclear weapons in a bid to deter the U.S. and the West from increasing military aid to Kyiv.

If Putin perceives that the U.S. is ignoring his threats, he could try more direct signaling, by ordering another large nuclear drill, “involving a major dispersal of mobile intercontinental missiles, heavy bombers, [and] strategic submarines.”

Haines said the IC continues to believe Putin would likely only authorize the use of nuclear weapons if he perceives “an existential threat to the Russian state or regime.”

“But we will remain vigilant in monitoring every aspect of Russia’s strategic nuclear forces. With tensions this high there is always an enhanced potential for miscalculation, unintended escalation, which we hope our intelligence can help to mitigate.”

Haines said that as “a war of attrition” drags out, the next few months could see “a more unpredictable and potentially escalatory trajectory.”

“The current trend increases the likelihood that President Putin will turn to more drastic means, including imposing martial law, reorienting industrial production, or potentially escalatory military actions to free up the resources needed to achieve his objectives as the conflict drags on – or if he perceives Russia is losing in Ukraine,” Haines said.

“And the most likely flashpoints for escalation in the coming weeks are around increasing Russian attempts to interdict Western security assistance, retaliation for Western economic sanctions, or threats to the regime at home.”

Moscow has made clear that it views NATO arms shipments to Ukraine as “legitimate targets” for destruction, once they cross the border into Ukraine.

In recent weeks and days, Russian missiles have repeatedly targeted the Odesa airport and warehouses in the vicinity, where the Russian defense ministry claims to have destroyed Western weaponry and equipment. Ukrainian officials have accused Russian forces of hitting residential areas in the city, killing civilians.