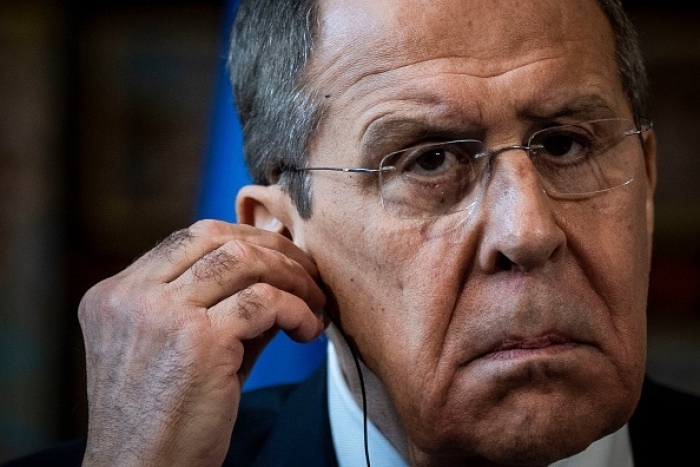 (CNSNews.com) – A Russian diplomat’s decision to resign on Monday over his government’s invasion of Ukraine came ten days after Foreign Minister Sergei Lavrov observed that attempts by Western nations to encourage Russian diplomats to take such actions had failed.

The resignation of Boris Bondarev, formerly the counsellor at the Russian mission in Geneva, won praise and prompted calls for others to follow his example.

“For 20 years of my diplomatic career I have seen different turns of our foreign policy but never have I been so ashamed of my country as on Feb. 24 of this year,” Bondarev wrote in an email to fellow diplomats in the Swiss city where the U.N. has its European headquarters.

He slammed both the “aggressive war unleashed by Putin against Ukraine” and the foreign ministry he has served for 20 years, accusing it of turning into a propaganda machine for the Kremlin.

“Today, the Ministry of Foreign Affairs is not about diplomacy. It is all about warmongering, lies and hatred,” Bondarev wrote. “It serves interests of few, the very few people thus contributing to further isolation and degradation of my country.”

He pointed to Lavrov, Russia’s veteran foreign minister, as a good illustration of this “degradation.”

“In 18 years, he went from a professional and educated intellectual, whom many of my colleagues held in such high esteem, to a person who constantly broadcasts conflicting statements and threatens the world (that is, Russia too) with nuclear weapons!”

“Boris Bondarev is a hero,” said the group’s executive director Hillel Neuer. “We are now calling on all other Russian diplomats at the United Nations – and worldwide – to follow his moral example and resign.”

Neuer called on “the free world to encourage more Russian diplomats to follow and defect, by providing protection, financial security and resettlement for diplomats and their families.”

Also praising Bondarev was Michael McFaul, a former U.S. ambassador to Russia: “Bravo Boris Bondarev! I know that many other Russian officials share your views. Hope they will now have the courage to follow your lead.”

Wolfgang Ischinger, head of the Munich Security Conference and a former German ambassador to Washington, said Bondarev should be invited to speak at the World Economic Forum now on in Davos. Ukrainian President Volodymyr Zelenskyy addressed the forum on Monday.

“Let’s hope other Russian professional diplomats will now follow his example and resign in order to retain their personal dignity,” Ischinger said.

‘You will have to look elsewhere’

In an interview with the BBC, Bondarev said he doubted his resignation would change much, “but it may be one little brick in the bigger wall which will eventually be built.”

Last April the foreign ministry of the Czech Republic infuriated its Russian counterpart when it made a public appeal to Russian diplomats to resign to protest the invasion of Ukraine.

“Many of you have surely come to the realization that you have been cheated by your leadership, yet you are still remaining its representatives,” the Czech ministry wrote. “Many of you serve in countries with free and independent media, and have access to information free from propaganda.”

It appealed to those Russian diplomats “who have a conscience and who maintain the capacity to recognize evil: take yourself out of this circle of accomplices.”

Ambassador Gennady Gatilov, the head of the Russian mission in Geneva – Bondarev’s boss until Monday – responded with a message describing as “disgraceful” Prague’s invitation for Russian diplomats “to commit treason.”

Gatilov said that if the Czechs were “attempting to find defectors and traitors in the Permanent Mission of Russia to the U.N. Office in Geneva, you will have to look elsewhere.” 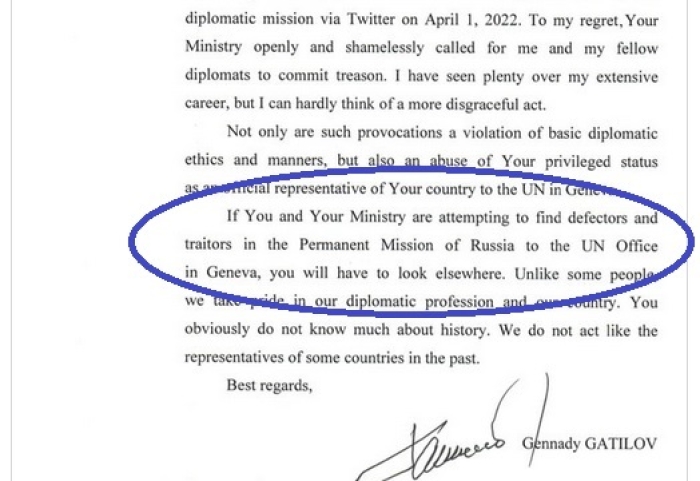 Earlier this month Russia’s TASS state news agency quoted Lavrov as saying attempts by the West to persuade Russian diplomats to become “traitors” had been unsuccessful.

“They were unable to find traitors among diplomats, although such attempts were made; they were made from abroad, and within our country as well,” Lavrov said.

There was no early response to Bondarev’s public resignation from either Gatilov and the mission in Geneva nor the foreign ministry in Moscow.