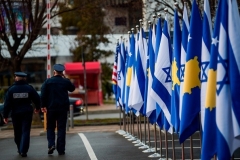 Kosovo and Israeli flags displayed during a ceremony at the headquarters of the foreign ministry in Pristina. (Photo by Armend Nimani/AFP via Getty Images)

(CNSNews.com) – A Trump administration vision moved ahead on Sunday when Kosovo became the first majority-Muslim country to open an embassy in Jerusalem, the city which President Trump in 2017 formally recognized as Israel capital despite broad international opposition.

The move came on the same day the Palestinian Authority, Arab League and Turkish government all protested the decision by the Czech Republic to open a diplomatic office in Jerusalem. The step falls short of moving Prague’s embassy to Jerusalem – which Czech President Miloš Zeman ultimately favors – but is nonetheless opposed by supporters of the Palestinian cause.

The opening of Kosovo’s embassy came six months after the White House announced a U.S.-brokered deal whose main focus was a process of economic normalization between Kosovo and Serbia, the country from which Kosovo was carved in a bloody ethnic conflict late last century.

In an unconventional bit of diplomatic maneuvering overseen by Trump’s special envoy for the region, Richard Grenell, Kosovo agreed as part of the deal to recognize Israel – which reciprocated – and to open an embassy in Jerusalem. Serbia, meanwhile, agreed to move its embassy from Tel Aviv to Jerusalem, a step yet to be taken.

“Huge. Historic. Beautiful,” Grenell tweeted on Sunday of the embassy opening. “I can’t wait to see it in person.”

“The pledge given in the Oval Office today is finally fulfilled,” said Kosovo’s foreign ministry.

“Setting of the plaques and the state flag at the Kosovo Embassy in Israel reflects the government of Kosovo’s commitment to comply with the pledge for establishing the diplomatic mission to Jerusalem,” the ministry said. 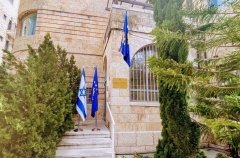 Its Israeli counterpart said it warmly welcomed the embassy opening, “a natural development of the relations and a realization of the Washington agreement.”

“A truly proud and historic moment for [Kosovo-Israel] relations,” Demiri tweeted. “The Republic of Kosovo today officially opened its Embassy in Jerusalem! The greatest honor of my life is to have this opportunity to open the Embassy and proudly serve my country in Israel.”

Kosovo Foreign Minister Meliza Haradinaj-Stublla said she was “extremely happy that our joint colossal work has been concluded successfully,” although also said, without elaborating, that the opening had taken place despite domestic and foreign “barriers.”

The Palestinians want Jerusalem as capital of an envisaged future state, and any act by a foreign government seen as legitimizing Israel’s claim to the city is anathema to the Palestinian Authority (P.A.) and its supporters in the international community. Kosovo becomes just the third country to open an embassy in Jerusalem, after the United States and Guatemala.

The Organization of Islamic Cooperation (OIC) last month called Kosovo’s plans an “illegal action [that] constitutes a violation of international law and all relevant U.N. resolutions,” and the European Union (E.U.) pressed Kosovo to reconsider.

Turkey – which wields considerable influence in the Balkans, former territories of the Ottoman Empire – had also warned Kosovo not to go ahead, and on Sunday its foreign ministry “strongly” condemned the opening, urging Kosovo’s government to “rescind this irresponsible and illegal step.”

“This decision taken by the leaders of a nation who have endured great sufferings to gain their independence is extremely unfortunate, as it disregards the plight of the Palestinian people, who have been under occupation for decades and subjected to serious human rights violations,” it said.

The Kosovo-Serbia agreement came alongside four others brokered by the Trump administration that helped to reduce Israel’s diplomatic isolation in its region, as Sudan, Bahrain, Morocco, and the United Arab Emirates normalized relations with the Jewish state.

Kosovo, which unilaterally declared independence from Serbia in 2008, is recognized by just over half of the member-state of the United Nations. Although those supporters include most E.U. countries it is considered a long way off membership of the bloc. (Its official status is “potential candidate for accession.”)

The Czech Republic, by contrast, is a member of the E.U. and its decisions to open a diplomatic office in Jerusalem prompted even more protests than the Kosovo move, given the E.U.’s firm opposition to Israel’s claims to Jerusalem, and support for the city being “the capital of two states.”

Unlike the Kosovo embassy opening, the Czech office was launched with some fanfare on Thursday, with Czech Prime Minister Andrej Babiš and Israeli Foreign Minister Gabi Ashkenazi in attendance.

The P.A. foreign ministry called the decision a “blatant attack on the Palestinian people and their rights, a flagrant violation of international law.”

Turkey also complained, saying the Czech office would contribute towards “attempts to erode the status of Jerusalem, one of the main parameters of the Palestine-Israel conflict.”

Arab League secretary-general Ahmed Aboul Gheit condemned the Czech move, calling it a violation of international law and “the consistent European policy on the issue of the occupied Jerusalem.”

He said east Jerusalem was “occupied land under international law,” a fact that is not altered by “the actions of some countries having chosen interests at the expense of principles.”

In fact the Czech diplomatic office – like Kosovo’s embassy – is situated in western Jerusalem, which is purportedly not disputed.

Czech is one of Israel’s strongest supporters in Europe. Last month it echoed the U.S. in criticizing the International Criminal Court (ICC) decision to investigate alleged war crimes committed in the disputed territories, saying like the U.S. that Palestine is not a sovereign state.