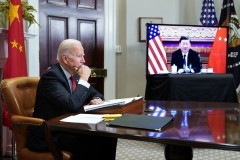 President Biden holds a virtual meeting with Chinese President Xi Jinping, from the Roosevelt Room of the White House on Monday night. (Photo by Mandel Ngan/AFP via Getty Images)

(CNSNews.com) – “I’m very happy to see my old friend,” Chinese President Xi Jinping told President Biden on Monday evening as the two began what Biden said would be a “candid and forthright discussion.”

Speaking through an interpreter and appearing on television screens in the Roosevelt Room of the White House, Xi said that the world’s two largest economies “need to increase communication and cooperation.”

“China and the United States should respect each other, coexist in peace, and pursue win-win cooperation,” he said, reciting talking points that appear regularly in official statements and government press briefings in Beijing.

“I stand ready to work with you, Mr. President, to build consensus, take active steps, and move China-U.S. relations forward in a positive direction.  Doing so would advance the interests of our two peoples and meet the expectation of the international community.”

Xi spoke after Biden, in his introductory remarks, alluded to some of the more sensitive issues in the bilateral relationship which he intended to raise during their virtual talks.

“If past is prologue, I am sure that today we’ll be discussing those areas where we have concerns – on human rights, on economics, to ensuring a free and open Indo Pacific,” Biden said. He referred too to the United States always standing up “for our interests and values, and those of our allies and partners.”

Reading from his notes, Biden said it was the responsibility of the leaders of the U.S. and China “to ensure that the competition between our countries does not veer into conflict, whether intended or unintended. Just simple, straightforward competition.”

“It seems to me we need to establish a commonsense guardrail – to be clear and honest where we disagree and work together where our interests intersect, especially on vital global issues like climate change.”

In other comments apparently designed to set a relaxed tone, Biden told Xi “you and I have never been that formal with one another” and referred to their travels together when both men were vice presidents, a reminiscence Biden frequently refers to.

(“I probably spent more time with Xi Jinping, I’m told, than any world leader has because I had 24, 25 hours of private meetings with him when I was vice president,” he told CBS News last February. “Traveled 17,000 miles with him. I know him pretty well.”)

Although Biden and Xi have spoken twice by phone this year – in February and September – he also thanked the Chinese leader again “for your congratulatory call when I won the election,” adding, “It was very gracious of you.”

According to a readout Xi was accompanied by five senior Chinese Communist Party and government officials. During the opening segment – before the press was ushered out – Xi alone could be seen on the screen.

The dispute over Taiwan has arguably been the most explosive issue between the U.S. and China over recent months, and Chinese officials made clear over the weekend that Taiwan would feature prominently in Monday night’s talks.

The discussions were expected to go on for “several hours,” a senior administration official said on background earlier.

The official described the virtual meeting as part of “our ongoing efforts to responsibly manage the competition, not about agreeing to a specific deliverable or outcome.”

Echoing remarks made by Sullivan earlier this month, the official said that “unlike previous approaches to policy with respect to China, the Biden administration is not trying to change China through bilateral engagement. We don’t think that's realistic.”

Asked whether the CCP’s recent cementing of Xi’s paramount leadership would change the dynamic of the relationship, the senior administration official suggested that Biden, too, would be going into the meeting strengthened because he would just have signed the infrastructure bill into law.