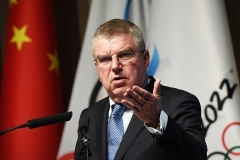 (CNSNews.com) – The Chinese government responded to reports that the U.S. and four English-speaking allies may not send official delegations to the 2022 Winter Olympics over human rights concerns in the usual manner – reiterating its opposition to the “politicization of sports.”

State media, however, appear to be taking a different approach, essentially saying a diplomatic boycott would be no big deal, and that China would be better off if troublesome countries did not send representatives.

After President Biden confirmed to reporters last Thursday that a diplomatic boycott of the February games in Beijing was “something we are considering,” British Prime Minister Boris Johnson was also reported to be mulling that option.

Then on Sunday, the Times of London reported that Britain was consulting with its allies in the so-called “Five Eyes” intelligence-sharing partnership – the U.S., Australia, Canada, and New Zealand – about a diplomatic boycott.

Chinese foreign ministry spokesman Zhao Lijian said in reaction to the report, “China firmly opposes politicization of sports and any acts and words that violate the spirit of the Olympic Charter. Such hyping-up would only undermine the interests of athletes from different countries.”

But the Chinese Communist Party organ Global Times adopted a dismissive tone, saying China should let Western nations go their own way rather than allowing them to act like “the moral police.”

In an editorial, it asked, “why should China care about their noises since it has chosen its own path?”

“China used to care about maintaining a harmonious atmosphere with the West and the way being regarded by the rest of the world, particularly by the West,” it said.

“This needs to be changed. With the rise of China as a major power and the weakened hegemony of the U.S., Western superiority has been shaken.”

In a separate article, Global Times mused that the Olympics are about the athletes, not about visiting political figures.

“Wouldn’t we still call the event the Olympic Games even if leaders of a few countries won’t show up? Was the Games ever designed as a show for government officials? Of course not.”

“So if any politician considers his or her possible attendance at the Winter Olympic Games as a favor to Beijing or a bargaining chip to pile pressure on China while seeking more interests, they will just make themselves look speculative and egocentric.”

The CCP paper also said it was time China stopped inviting the U.S. to send dignitaries to the games.

“The Olympics shouldn’t welcome such officials. They harbor ill intentions. Even if they come, they will just create trouble. Without them, the Olympics will be pure. China has no time to accommodate them.”

The months-long campaign by human rights advocates and Western lawmakers calling for a boycott has been linked mainly to the CCP’s mass-scale human rights violations in Xinjiang, abuses in Tibet, and stifling of democracy in Hong Kong.

Peng disappeared from public view for almost three weeks after posting a social media post – that was quickly taken down – accusing a senior CCP official of sexual assault.

The IOC said in a brief statement afterwards that she had confirmed she was “safe and well” but asked for her privacy to be respected.

Bach’s intervention may have backfired somewhat however, as the organization was then accused of facilitating Beijing’s propaganda.

“The IOC has vaulted itself from silence about Beijing’s abysmal human rights record to active collaboration with Chinese authorities in undermining freedom of speech and disregarding alleged sexual assault,” said Yaqiu Wang, a researcher of China for Human Rights Watch.

“It has been disturbing to see the IOC take statements from CCP propagandists at face value since Peng Shuai’s disappearance, but their promotion of this latest stunt turns the IOC from willfully ignorant into an active participant in the CCP’s mistreatment of Peng,” said Rep. Michael McCaul (R-Texas), ranking Republican on the House Foreign Affairs Committee.

“It’s clear the IOC is more interested in its financial relationship with the CCP than in protecting the wellbeing of Olympic athletes.”

State Department spokesman Ned Price said the administration shares concerns about the Peng Shuai situation and was “closely monitoring” it.

“We will continue in the PRC context, and in all contexts, to stand up for the freedom of speech, especially in light of what we’ve seen from the PRC, and that is essentially a zero-tolerance approach for criticism and a record of silencing or attempting to silence those who do attempt to speak out,” he said.

Asked whether it was now time to announce a diplomatic boycott of the 2022 games, Price said he had no update to offer.

White House Press Secretary Jen Psaki also had no update on when a decision may be announced, but said “obviously, human rights and the handling of human rights in China is something that we watch closely, and the world watches closely.”