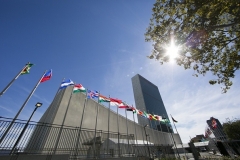 (CNSNews.com) – The Chinese government took its antagonism towards the United States into a U.N. budgetary committee meeting this week, criticizing the U.S. – though without naming it – for payment arrears, while stressing that China always pays its dues to the world body on time, and without setting conditions.

The United States is by far the largest contributor to the United Nations, with U.S. taxpayers accounting for 22 percent of the regular budget and 25 percent of the peacekeeping budget.

Contributions are assessed according to member states’ “capacity to pay,” calculated from national economic output and other factors.

As such, China has seen its share climb steadily over the past decade, but although now in second place it still pays considerably less than the U.S. – 12 percent of the regular budget and 15.2 percent of the peacekeeping budget.

“The current financial situation of the U.N. remains worrisome,” Chinese Ambassador Zhang Jun told the meeting in New York. “Despite repeated calls by most member-states and despite the secretary general’s letters to member-states expressing his concerns, one major contributor still has long-time unpaid assessments, which is the main cause of the U.N. liquidity crisis.”

By contrast, China was “always highly responsible” and pays its assessments to the regular and peacekeeping budgets “in a timely manner,” Zhang said.

“We call on member states, especially large contributors, to fulfil their obligations on time, in full and without conditions,” he added, urging others to “translate their promises into actions.”

U.S. delegate Patrick Kennedy acknowledged that the U.S. has a responsibility to the world body as its largest funder.

“As the largest contributor of assessed funding to the regular and peacekeeping budgets the U.S. has a significant responsibility for the finances of the organization,” he said. “We have a shared interest in ensuring that the methodology for assessments is equitable, data-driven, and grounded in the principle of ‘capacity to pay.’”

The General Assembly’s fifth committee, dealing with budgetary matters, will this year carry out its once-every-three-years negotiation over the “scale of assessments” for member-states’ contributions to the U.N.

The arrears mentioned by Zhang relate to more than one billion dollars “owed” by the U.S. to the U.N. peacekeeping budget. The U.S. is assessed to provide 27.89 percent of the peacekeeping budget, but Congress in 1994 placed a 25 percent cap on the contribution, on the grounds that the U.S. was paying too much.

The federal government over the years since has found ways to make up the shortfall, but the Trump administration in 2018 said the U.S. would no longer pay more than the 25 percent ceiling.

“I have told our negotiators that the United States will not pay more than 25 percent of the U.N. peacekeeping budget,” President Trump told the General Assembly that fall. “This will encourage other countries to step up, get involved, and also share in this very large burden.”

Then-Ambassador to the U.N. Nikki Haley told the Security Council later that year that the U.S. contribution of 25 percent of the peacekeeping budget was “more than fair.”

“Insisting on more, especially when other nations’ assessments are so low, only erodes support for the United Nations,” she said. “I urge everyone to support more equitable burden sharing when it comes to peacekeeping financing. This is not just a question of fairness. It is a question of the ongoing success of multilateralism itself.”

In its FY 2022 budget request the Biden administration is seeking to fully fund U.S. assessments to the U.N. and to start addressing the peacekeeping arrears. It has requested just under $1.7 billion for peacekeeping (which would cover the 27.89 percent assessment) and an additional $300 million as an instalment towards clearing the arrears.

Over the summer, a group of House Democrats introduced legislation designed to remove the 25 percent cap that was put in place in 1994.

Lead sponsor Rep. Sara Jacobs (D-Calif.), a former employee of the U.N.’s Department of Peacekeeping Operations, said when the bill was introduced that the 1994 cap “has undermined our credibility, weakened peacekeeping missions, and contributed to a leadership vacuum at the U.N. that has contributed to the detriment of the organization’s commitment to human rights.”