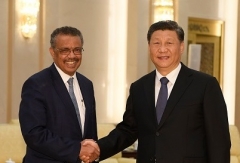 (CNSNews.com) – A year after early cases of a virus “of unknown etiology” were emerging in Wuhan, China’s foreign ministry continues to push the line that the coronavirus responsible for COVID-19 may have originated elsewhere.

And with a team of international experts expected to arrive in the outbreak city within weeks, Chinese authorities have not commented on the plans for that World Health Organization investigation.

Senior WHO officials say they expect the team to begin its China visit in the first week in January. But at two consecutive daily briefings in Beijing late last week, foreign ministry spokesman Wang Wenbin would not confirm the planned visit when asked about it.

Instead, he repeated the months-old talking point about China taking the lead in cooperation with WHO in a “transparent” manner, and expressing the hope other “relevant countries” will follow its commendable example and “do the same.”

At Friday’s briefing, Wang repeated the charge that the coronavirus may not have first emerged in humans in Wuhan at all.

“Origin-tracing is an evolving process which may involve many countries and places,” he said. “We’ve recently read many reports on the virus breaking out in multiple places worldwide last year. It proves again that tracing the origin of the novel coronavirus is a scientific task that must be taken very seriously. It calls for scientists to carry out investigation and research worldwide.”

Chinese state media have long suggested that the virus originated somewhere else, despite scientific skepticism in response to the as-yet unproven assertions. One of Wang’s colleagues, Zhao Lijian controversially used his Twitter account last March to promote a conspiracy theory saying the U.S. Army introduced the coronavirus to Wuhan in the fall of 2019.

The United States and others have long been pressing for a transparent inquiry into China’s handling of the outbreak, which continues to cause havoc across the globe, and has been blamed for more than 1.69 million deaths as of Monday.

The Trump administration accuses China of mishandling its early stages. It also accused WHO of being overly deferential towards Beijing, rather than pushing the Chinese to respond more quickly and effectively to the crisis. It set in motion a process of U.S. withdrawal and defunding, although a Biden administration looks set to reverse course.

More than seven months ago, the WHO’s annual assembly adopted a resolution mandating an inquiry into the virus’ origin, and WHO director-general Tedros Adhanom Ghebreyesus said at the time it would begin its work “at the earliest time possible.”

To the frustration of many, it took until November before the composition of the team and its “terms of reference” were finalized. On Thursday, Babatunde Olowokure, the WHO’s regional emergencies director in the Western Pacific, told a briefing in Manila that the team’s arrival in China “is anticipated, as far as we are aware, to happen in early January.”

‘They will not be ‘supervised’ by Chinese officials’

On Friday, Michael Ryan, director of the WHO emergencies program, was asked during a WHO briefing in Geneva when the team would arrive, where it would go, and whether it would work “under Chinese supervision.”

“We still don’t have a take-off date, as we’re working on the logistics around visas and flights,” he replied, “but we do expect the team to leave in the first week of January.”

“The team will visit Wuhan – that’s the purpose of the mission,” Ryan said. “Clearly we will have to – the team will pass through and by Beijing as is the necessary part of any mission that’s considered to be a joint approach, and we will show good courtesy to our colleagues in China in doing that. But the purpose of the mission is to go to the original point at which human cases were detected, and we fully expect to do that.”

Ryan bristled at the notion of “Chinese supervision” over the WHO-convened team of experts.

“They will not be, as you say in quotes, ‘supervised’ by Chinese officials. I sometimes wonder that the language that some of our journalistic colleagues use, and how things tend to be characterized through the question, not through the answer that’s given,” he said. “We will operate as we would operate in any member-state, with – at their invitation, with gratefulness for their support to that. And with the full intention of pursuing the scientific principles that this organization has always stood for.”

“We will continue to do that and provide all the support necessary for the international team that we have brought together, in order to find and learn more about the origin and source of this virus.”

On The Mark Levin Show on Friday, Secretary of State Mike Pompeo stated that “to this day, Mark, the Chinese Communist Party hasn’t allowed an investigation into where this began, inside of Wuhan.”

He said it was “so telling” that American media “refuses to report” on that fact.

See also:
WHO Hopes Int’l Team Probing Virus Origin Will Reach Wuhan ‘As Soon As Possible’ (Nov. 25, 2020)
US Scolds WHO Over Sluggish Approach to Investigating Origins of Coronavirus in China (Nov. 12, 2020)
Int'l Effort to Find Virus’ Origin is Being Held Up by China (Oct. 9, 2020)