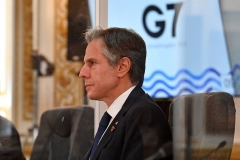 Secretary of State Antony Blinken at the opening of the G7 foreign ministers' meeting in London on Tuesday. (Photo by Ben Stansall/Pool/AFP via Getty Images)

(CNSNews.com) – China was “the dominant topic” when foreign ministers from the G7 met in London Tuesday for the first face-to-face meeting in two years, a focus that will only reinforce Beijing’s suspicion that the group of leading industrialized democracies is ganging up on it.

Adding to that perception is a decision by Britain – which holds the rotating presidency – to include India and Australia among a small group of invited participants from outside the group to attend the G7 meetings this year, including next month’s leaders’ summit.

Their presence along with G7 members Japan and the United States means that the full “Quad” is on hand. China views the four-member Indo-Pacific security forum as an initiative designed primarily to counter it.

Tuesday’s program began with China, a discussion that lasted an hour and half, a senior U.S. official said on background. (By comparison, sessions on Burma, Syria, Libya, and Afghanistan were shorter by two-thirds. A separate discussion covering Russia, Ukraine, and Belarus also ran for 90 minutes.)

“China was the dominant topic today,” the official told a briefing at a Mayfair hotel. “We opened with it because it was the most important agenda item for us, out of the many important things that we had to discuss.”

The official said “there was broad agreement” among participants that China must abide by the rules of the international order and compete fairly.

There was also deep concern about China’s human rights behavior, something which the official said was “not an internal affair” – as Beijing frequently asserts.

Also discussed was “China’s threatening and aggressive behavior in the South China Sea,” and its economic coercion through the Belt and Road Initiative (BRI). The official said China was using the massive infrastructure program to make other countries dependent in ways that compromise their sovereignty, and ensnare them in a debt trap.

And the official confirmed that a lengthy communique to be released at the end of the meeting on Wednesday by Secretary of State Antony Blinken and his counterparts would include strong backing for Taiwan, including for its participation in bodies like the World Health Organization. Any move to expand Taiwan’s role in the international community is anathema to the Chinese Communist Party (CCP), which regards the island democracy as a rebellious province.

Asked whether the G7 was evolving and “entering a new phase,” the U.S. official spoke of a sense that multilateralism needs to be restored to deal with global challenges.

“These are the countries that are the strongest and the richest democracies with shared values, so who else is better positioned to begin to play a leadership role …?”

China’s foreign ministry is not briefing over a five-day Labor Day holiday, but commenting on the meeting in London, the editor-in-chief of the CCP organ Global Times, Hu Xijian slammed the G7 ministers for criticizing China for human rights violations.

“I couldn’t help but say that they are the most good-for-nothing elite since the end of WWII, because they have abandoned a basic sense of shame and do not seek truth based on fact,” he wrote.

An earlier Global Times commentary opined that the G7 was looking for a new purpose for its existence, hence its frequent focus on human rights and democracy in China.

“With the decline of the seven countries and the rise of some emerging economies, its role in economic coordination is weakening and this bloc is incapable of leading the global economy,” it said.

“In this context, the group has to look for other reasons to maintain its existence. ‘Human rights’ must be one of them. Labeling themselves as democratic countries, the seven countries share common values in this aspect. This has become one of a few areas it can hype to prove the group’s values.”

But in an interview with the Financial Times on Tuesday, Blinken said the U.S. was not focused on “trying to contain China, or to hold China down.”

“What we are about is upholding the international rules-based order that we’ve invested so much in over many decades, that has served us well, but not just us,” he said. “We think, for all its imperfections, it’s served the world pretty well – including, by the way, China.  And anyone who takes action that would disrupt that order, that would challenge that order, that would seek to undermine it, we’re going to stand up and protect it.”

Blinken also made a case for acting jointly when confronting China about its behavior.

“When it’s the United States alone complaining about them, we’re 25 percent of world GDP.  If we’re working closely with other similarly aggrieved countries, mostly democracies, that might well be 40, 50, 60 percent of world GDP,” he said. “That’s a lot harder for China to ignore.”

The U.S. held the G7 presidency last year. The 2020 meeting of the group’s foreign ministers was to have been hosted by Secretary of State Mike Pompeo in Pittsburgh, but was shifted to a virtual format due to the coronavirus pandemic. The leaders’ summit, scheduled for Camp David in June, was postponed and then canceled, for the same reason.

President Joe Biden is expected to attend the 2021 G7 summit in Cornwall, England next month, on his first overseas trip since taking office.