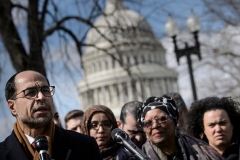 (CNSNews.com) – As the Council on American-Islamic Relations (CAIR) looks towards a Biden presidency, its wish list includes the scrapping not only of President Trump’s travel bans, but also of legislation, signed into law by President Obama in 2015, which created the basis for visa restrictions on visitors from seven Muslim-majority “countries of [terrorism] concern.”

All seven of the countries subsequently identified by the Obama Department of Homeland Security under that legislation would later feature in various iterations of Trump’s travel executive orders.

Looking back even further, CAIR also hopes a Biden administration will target an FBI-administered watchlist of “known or suspected terrorists,” first put into place by the George W. Bush administration after 9/11. A federal judge ruled last year that the list violates the constitutional rights of Americans whose names appear on it.

Welcoming the projected election outcome, CAIR national executive director Nihad Awad said Joe Biden had “pledged to end the Muslim ban on his first day in office, include Muslims at every level of his administration and address issues of racial and religious discrimination.”

“We plan to join other American Muslim leaders and organizations in ensuring that the Biden administration fulfills these promises,” he said. “We also plan to continue holding our government accountable when it errs.”

CAIR, which calls itself the nation’s biggest Muslim civil rights and advocacy group, urged Biden and Congress to take steps including ending “the Muslim and Africa travel bans” and the Visa Waiver Program Improvement and Terrorist Travel Prevention Act of 2015.

The “travel bans” are a series of executive actions that currently affect certain categories of visitors from 13 countries, eight of which (Iran, Kyrgyzstan, Libya, Nigeria, Somalia, Sudan, Syria and Yemen) have Muslim majorities.

When first issued, Trump was accused of discriminating against Muslims in particular – although 49 of the 57 members of the Organization of Islamic Cooperation bloc were not impacted, and despite the fact that five of the 13 countries that are affected (Burma, Eritrea, Tanzania, North Korea and Venezuela) are not Muslim-majority countries.

As pointed out by administration officials at the time, seven of the countries targeted in Trump’s first order, in January 2017, had also been identified by the Obama DHS in 2016 as “countries of concern” due to terrorism risk, and as a result foreign nationals who had visited then since March 2011 lost visa waiver benefits.

Those DHS designations were made under the legislation which CAIR wants Biden and Congress to ditch.

The Act was passed by the House of Representatives on Dec. 8, 2015 with significant bipartisan support – a vote of 407-19 (The 19 nays were all Democrats, members of the Congressional Progressive Caucus.)

The measure was then incorporated into an omnibus spending bill, the Consolidated Appropriations Act of 2016, which Obama signed into law ten days later.

In January 2016, the DHS identified Iran, Iraq, Sudan, or Syria and “countries of concern” under the legislation, and a month after that, it added Libya, Somalia, and Yemen to the list.

The same seven countries were listed in Trump’s first executive order, although Iraq was removed in the second one, in March 2017.

‘Known or reasonably suspected of being involved in terrorist activities’

CAIR also hopes to see the back of another security measure which it has long opposed.

The FBI describes the Bush-era TSDB as “a single database that contains sensitive national security and law enforcement information concerning the identities of those who are known or reasonably suspected of being involved in terrorist activities.”

Although the vast majority of those listed are foreigners – more than 99.5 percent in 2017 – American citizens or lawful permanent residents do also appear.

In 2016 CAIR brought a lawsuit on behalf of two dozen American Muslims “unjustly labeled as suspected terrorists by their government, causing extensive harm to their families, careers, and ability to travel.”  In September last year a district court judge ruled that the list “fails to provide constitutionally sufficient procedural due process.”

Among the concerns of congressional critics has been the fact that in some cases – in line with a Bush directive in 2003 – data has been shared with foreign governments. They suspect that those governments could include several with poor human rights records.

In July last year, the House passed intelligence authorization legislation that included an amendment by Rep. Ilhan Omar (D-Minn.), requiring the administration to provide Congress with information about the foreign countries with which the TSDB data is shared. The measure was incorporated into the National Defense Authorization Act for fiscal year 2020.