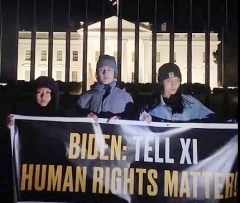 Some of the Tibetan, Uyghur and Hong Kong activists outside the White House on Sunday night. (Screen grab: Instagram)

(CNSNews.com) – As President Biden prepares for his virtual meeting with Chinese President Xi Jinping, rights activists and Republican lawmakers are urging the U.S. president to speak out against abuses by the Chinese Communist Party, pointing in particular to its suppression of minority Muslims, Tibetan Buddhists, and the pro-democracy camp in Hong Kong.

“The CCP is committing genocide in Xinjiang; it took over Hong Kong; it is taking increasingly aggressive action towards Taiwan; and its military buildup, including hypersonic missiles, can’t be ignored,” said Rep. Michael McCaul (R-Texas), ranking Republican on the House Foreign Affairs Committee.

“These are just a few of the recent chilling displays by the CCP showing their true intentions,” he said, urging Biden to “strongly address their aggressive malign behavior and gross human rights violations, while not making any concessions based on false promises from Xi and the CCP.”

Sen. Bill Hagerty (R-Tenn.), a member of the Senate Foreign Relations Committee, said the virtual meeting was “a critical opportunity in the wake of Afghanistan for [Biden] to demonstrate strength.”

“A posture of appeasement will only embolden the CCP,” he said. “Biden must make clear that we will not condone their malign behavior and we will continue to strengthen our alliances in the region.”

In an earlier brief statement on the virtual meeting, White House press secretary Jen Psaki said that Biden would “be clear and candid about our concerns with the PRC.”

Asked during a briefing on Friday about claims of forced slave labor, forced sterilization and other abuses against Uyghurs and others in Xinjiang, Psaki said that “one of the purposes of this leader-to-leader engagement is to also discuss areas where you have strong concern and disagreement.”

Biden “will not hold back, as he never has, on areas where we have concern,” she said.

“The chances are zero that Biden will stand up to China,” commented Sen. Ted Cruz (R-Texas), another vocal critic of the CCP on the Senate Foreign Relations Committee. “President Biden has a pattern of appeasement towards our adversaries and that has empowered them.”

Outside the White House on Sunday, Tibetan, Uyghur and Hong Kong activists and supporters rallied ahead of the talks, calling on Biden to prioritize human rights during the meeting. They said they intend to stay there until the meeting is over.

“We stand here, in solidarity, to send a clear message to President Biden – live up to your promise to assert leadership among democracies globally and speak out against China’s egregious human rights violations when meeting Xi Jinping in tomorrow’s virtual summit,” said Hong Kong Democracy Council executive director Brian Leung.

Lobsang Tseten of Students for a Free Tibet appealed to Biden to turn down any invitation from Xi to attend the Beijing Winter Olympics next February, and to announce a U.S. diplomatic boycott of the games.

Psaki on Friday had no comment to offer about reports that Xi may use the opportunity to invite Biden to attend the games' opening. Amid widespread calls to boycott or downgrade representation because of CCP abuses, the administration’s position on the issue has been keenly awaited for months.

‘Do what you promised’ 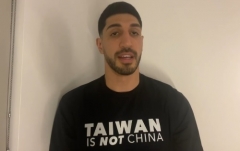 NBA player Enes Kanter, who has emerged as an outspoken critic of Chinese policies, posted a provocative tweet on Sunday about Biden’s upcoming meeting with “Dictator Xi Jinping.”

“Stop playing games with bullies & do what you promised to the world! Prioritize Human Rights!” he urged Biden.

Kanter, who plays for Boston Celtics, wondered if Biden would raise the “Uyghur Genocide or assault on Tibetans & HK.”

“Or will they pat each other on the back?”

Kanter’s tweet featured two photos of previous, evidently warm interactions between Xi and then-Vice President Biden, during visits by the Chinese leader in 2012 and 2015.

Kanter, who has half a million followers on Twitter and one million on Instagram, has posted messages in recent weeks slamming China’s policies in Tibet, Xinjiang, and Hong Kong, and in support of democratic Taiwan. He has also worn brightly-colored shoes featuring China-related political messages and images.

The NBA has not reacted publicly to Kanter’s activism, although he told CNN that NBA Commissioner Adam Silver has assured him he is not breaking any rules.