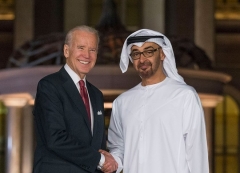 (CNSNews.com) – Welcoming Thursday’s agreement on the normalization of ties between Israel and the United Arab Emirates – a diplomatic success for President Trump less than 12 weeks before the election – presumptive Democratic nominee Joe Biden said pointedly that it built on the efforts of the Obama-Biden and other previous administrations.

“I personally spent time with leaders of both Israel and the UAE during our administration, building the case for cooperation and broader engagement and the benefits it could deliver to both nations,” the former vice president said in a statement.

(The 2002 Arab Peace Initiative set conditions for Arab and Islamic states to normalize ties with Israel, including “full Israeli withdrawal from all the territories occupied since 1967, including the Syrian Golan Heights” and the return of Palestinian refugees. Israel rejected it, although then-Secretary of State John Kerry in 2014 tried unsuccessfully to revive it.)

Apart from a vague nod to “the role American diplomacy can play,” Biden gave no direct credit to the Trump administration for the Israel-UAE accord.

The U.S.-brokered agreement is only the third of its kind formally normalizing relations between Israel and an Arab state. It includes an Israeli pledge not to pursue controversial plans to extend its sovereignty over some of the territories disputed between Israel and the Palestinians.

Reacting to the announcement, Kerry, now a Biden campaign surrogate, said in a tweet that credit was due to the UAE, Crown Prince Mohammed bin Zayed, and its ambassador to Washington, Yousef al-Otaiba.

But Kerry, too, did not directly acknowledge the efforts of the Trump administration in achieving the agreement, which he said “builds on years of work to advance regional peace.”

The Obama administration sought to advance Israeli-Palestinian peace during both terms, but especially in the early period of Kerry’s tenure at the State Department. A nine-month push by Kerry to kick start talks between Israel and the Palestinians collapsed in April 2014.

By the time President Obama left office, relations with Israel had cooled, in part over his decision to abstain, rather than veto a U.N. Security Council resolution describing areas, including the location in Jerusalem of the holiest site in Judaism, as “occupied Palestinian territory.”

U.S. relations with the Arab Gulf states, meanwhile, had become strained over the perceived empowering of the Iranian regime as a result of the nuclear deal, a major Obama-Biden-Kerry foreign policy priority. Most of the Gulf states view Tehran as a significant security threat.

‘Coddling up to the Iranian regime’

In a statement on behalf of the Trump campaign Thursday, former acting director of national intelligence Richard Grenell said that with the Israel-UAE agreement the president “has achieved a victory for world peace that career politicians like Joe Biden were never able to accomplish.”

In separate remarks, Grenell gave Biden some credit for the agreement – although not in a complimentary way.

“If it wasn’t for Joe Biden we wouldn’t have this peace deal today,” he told Newsmax TV. “Because what Joe Biden did by coddling up to the Iranian regime and giving them billions of dollars [under the nuclear deal] really scared the Middle East and our partners in the Middle East.”

Other critics skewered Biden’s apparent attempt to take some credit for the Israel-UAE breakthrough.

“Biden trying to claim credit for the Israel-UAE deal that is clearly a response to the Obama-Biden garbage Iran deal is certainly audacious,” commented DailyWire.com editor-in-chief Ben Shapiro.

“This is a gross revisionism,” tweeted Foundation for Defense of Democracies (FDD) research fellow Tony Badran. “The Obama-Biden administration, whose legacy was realignment with Iran, knifed Israel at the UNSC literally in its last hours in office, by adopting the rejectionist position of its enemies through a UNSC [resolution] it orchestrated.”

And, reacting to Biden’s assertion that he “personally spent time with leaders of both Israel and the UAE,” Hudson Institute senior fellow Michael Doran scoffed that “the biggest memory the Emiratis have of their time together with Biden” was when he had to apologize after accusing them publicly of having funded and armed jihadists in Syria.

Biden did visit the UAE 17 months after that apology, becoming the most senior American official to do so since President George W. Bush in 2008.

White House readouts of Biden’s meetings there with bin Zayed and with UAE Prime Minister Mohammed bin Rashid Al-Maktoum said nothing about either Iran or Israel.