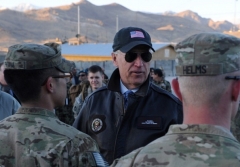 (CNSNews.com) – While campaigning for the White House, Democrat presidential nominee Joe Biden declared of the military engagement in Afghanistan, “We don’t need those troops there. I would bring them home.”

He also said that the U.S. needs only “a small footprint” there, to ensure that terrorists are “not able to launch more attacks from the region on the United States.”

The Pentagon’s confirmation on Tuesday that the U.S. will withdraw thousands of troops from Afghanistan (and Iraq) by mid-January – just days before the end of President Trump’s term – is evoking strong reactions, including from both sides of the aisle in Congress.

Senate Majority Leader Mitch McConnell said in a floor speech on Monday that “a rapid withdrawal of U.S. forces from Afghanistan now would hurt our allies and delight the people who wish us harm.”

“Like all Americans, I want our military personnel brought home as soon as possible,” the ranking Democrat on the Senate Armed Services Committee, Sen. Jack Reed (D-R.I.), said on Tuesday. “But there is a difference between a strategic, coordinated drawdown and rash, reckless abandonment of the mission and our partners and allies.”

“President Trump seems to think this lame-duck move will bolster his legacy, but in the process he is making it more difficult for President-elect Biden to wisely safeguard the nation and doing harm to our network of alliances and partnerships,” Reed said.

Under an agreement signed with the Taliban last February, the U.S. agreed to reduce the number of troops in Afghanistan from around 12,000 to 8,600 by July of this year, which it did, and then to zero by the beginning of May next year, on condition that the Taliban meets commitments, including preventing groups including al-Qaeda from using the country to threaten the security of the U.S. and its allies.

National Security Advisor Robert O’Brien told reporters at the White House on Tuesday that the 2,500 troops remaining in Afghanistan after mid-January would “defend our diplomats” and “deter our foes.” He added it was Trump’s hope all would return home safely by May.

Although that timeline would align with the U.S.-Taliban deal, critics say the Taliban is not meeting its obligations.

Even U.S. Special Representative for Afghanistan Zalmay Khalilzad, a strong proponent of the agreement, conceded to U.S. lawmakers in September that “with regard to terrorism and al Qaeda,” the Taliban has made some “positive steps, but they have some distance still to go.”

In the fall of 2019, Biden addressed the issue of troops in Afghanistan during a Democratic primary debate in Houston, Texas.

After insisting that he knew the situation there better than any of his rivals on the stage, he said, “I was opposed to the surge in Afghanistan. The whole purpose of going to Afghanistan was to not have a counterinsurgency – meaning that we’re going to put that country together.”

Biden argued that Pakistan “owns” three provinces in the east, which were “run” by the Haqqani network, a Taliban affiliate and U.S.-designated foreign terrorist organization.

“The point is that it’s a counterterrorism strategy [that’s required],” he said. “We can prevent the United States from being the victim of terror coming out of Afghanistan by providing for bases – insist the Pakistanis provide bases for us to airlift from and to move against what we know.”

“We don’t need those troops there,” he said of U.S. forces in Afghanistan. “I would bring them home.”

(During the same debate, Sen. Elizabeth Warren reaffirmed an earlier pledge to withdraw U.S. troops from Afghanistan within her first year in office, and Pete Buttigieg argued that ensuring Afghanistan was never again used to launch an attack on the U.S. “does not require an open-ended commitment of ground troops.”)

During another primary debate, in New Hampshire five months later, Biden returned to the theme.

“I’ve been in every part of Afghanistan,” he said, referring to visits both as vice president and as a senator. “Here’s what I saw: There is no possibility of uniting that country, no possibility at all of making it a whole country.”

“But it is possible to see to it that they’re not able to launch more attacks from the region on the United States of America,” Biden continued. “That’s a small footprint that we need, and I argued for that in the beginning.”

Aside from Biden’s references to withdrawing troops, his comments on Afghanistan’s cohesion raised eyebrows, including inside the country itself.

“Afghanistan fought and stood as a whole nation [in] the face of tyrants such as the Soviet invasion, terrorism invasion and now, it is in the front lines so that the other nations are safer,” said President Ashraf Ghani’s spokesman, Sediq Sediqqi, in response to Biden’s remarks in New Hampshire.

“Sad to see Biden’s insulting and ignorant comment about ‘no possibility to unite Afghanistan,’” tweeted former U.N. special envoy to Afghanistan Kai Eide. “It also demonstrates a fundamental lack of respect for and knowledge of Afghanistan and its people.”

“He doesn’t even know that Afghanistan was there when America wasn’t even created,” tweeted Zarif Aminyar, a U.S.-trained Afghan economist and advisor to Ghani. “We were a nation for thousands years & will remain a proud nation.”

In a Nov. 8 editorial looking ahead to a Biden presidency, Afghanistan Times described his earlier comments about the impossibility of Afghanistan being a united nation as “terrible.”

“We are one united nation despite being at war for over four decades – we are still one nation with one flag and one president.”

In another past comment on Afghanistan that made waves, Biden told Newsweek magazine in an interview in late 2011 that the Taliban “is not our enemy.”

Then Republican presidential candidate Mitt Romney called the comment “bizarre, factually wrong, and an outrageous affront to our troops carrying out the fight in Afghanistan.”

“Who are Taliban if not Enemies?” the independent Daily Outlook Afghanistan newspaper responded in an editorial, pointing to the huge loss of life and destruction of infrastructure at the hands of the terrorist group.