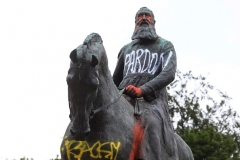 A vandalized status in Brussels of King Leopold II of Belgium. (Photo by Thierry Roge/Belga/AFP via Getty Images)

(CNSNews.com) – Long before the current targeting of monuments and statues linked to racism and colonialism, one monument in Europe was stoking controversy for a different reason – because it referred to the Arab slave trade in Africa.

Built in the early 1900s, the “Monument to Belgian pioneers in Congo,” located in the Parc du Cinquantenaire in central Brussels, is provocative for many reasons, given the history of Belgian King Leopold II’s brutal colonial enterprise in central Africa in the late 19th century, blamed for the deaths of millions of Congolese.

But what also upset some Arabs more than 30 years ago was one of the inscriptions, in French and Dutch, translated as, “Belgian military heroism annihilates the Arab slave-driver.”

According to Belgian press accounts, following complaints from the Saudi and Jordanian embassies, and the imam of the Great Mosque – located just 400 feet from the monument – authorities in 1988 chipped away the offending words, “L’ARABE” in French, and “ARABISCHEN” in Dutch.

About four years later, the words were reinstated at the request of an organization of veterans of African military campaigns, but after years of vandalism authorities announced in 2013 that they would not be retained.

Early this month, however, two lawmakers from the Vlaams Belang (Flemish Interest) party, Bob De Brabandere and Dries Van Langenhove, symbolically reattached the missing words, saying they were doing so to protest the “cult of apology” prevailing today.

Belgian lawmakers Bob De Brabandere and Dries Van Langenhove at the graffiti-defaced monument in Brussels where they temporarily restored the Dutch and French words for ‘Arab,’ removed earlier from the original inscription. (Photo: Vlaams Belang)

“If one type of crime has to be apologized for, why are we removing the other?” the populist right-wing party asked in a statement.

“Why focus on Western mistakes in the distant past and barely pay attention to the major human rights violations that take place outside the Western world today, such as the slave trade?”

Vlaams Belang stated that “atrocities of the past” should not be denied, but called for even-handedness.

“This applies to Leopold II, but also to other culprits,” it said. “And certainly for crimes, such as slavery, which continue to continue in certain regions to this day.”

“Europeans today have to apologize for anything and everything, often for things that happened in the distant past and with which we have nothing to do today,” said De Brabandere, a Vlaams Belang senator.

Van Langenhove, a Vlaams Belang member of the House, said “harrowing human rights violations” continue to this day, especially in Africa and the Arab world.

“The fact that the words for ‘arab’ have once again been removed, proves our point,” De Brabandere said in response to queries on Thursday. “It shows that the leftist political parties who are currently in power are not interested at all in looking in a fair way to the colonial past, but in [laying blame on] the people of European descent.”

“Apparently, crimes committed by Europeans should be put in the spotlight, but one should remain silent about those committed by other population groups,” he said. “It is very hypocritical, knowing there is no doubt that the Arab world has played a major role in the global slave trade. In fact, if slavery still exists today, it is not in Europe or the USA, but in the Arab world, Africa and North Korea.”

Like others in Belgium and elsewhere, the monument has attracted a lot of graffiti over recent weeks. Slogans, some partly obscuring each other, include “Black Lives Matter” and “White Lives Matter, Thank You,” along with “10 million dead,” a reference to the estimated number of Congolese who died during the colonial era.

Leopold II privately ruled the “Congo Free State” from 1885 to 1908, when the Belgian government under international pressure assumed control over the territory. It remained a colony of Belgium until independence in 1960.

At the end of June, the current monarch, King Philippe, wrote a letter to Democratic Republic Congo President Félix Tshisekedi, expressing “deepest regrets” for “acts of violence and cruelty” committed in the Congo Free State, and the “humiliation and suffering” inflicted during the subsequent colonial era.

The now-removed reference to Arab slavers on the monument inscription alludes to a conflict between Congo Free State forces and Arab slave-traders from Zanzibar in 1892-1894, sometimes known as the Congo-Arab War.

Slavery existed in pre-Islamic Arabia, and continued after the founding of Islam in the 7th century. Mohammed himself captured, bought and sold black slaves, as recorded in numerous Hadiths, the traditional writings and sayings of Islam’s prophet.

According to the Encyclopedia Britannica, “[a]pproximately 18 million Africans were delivered into the Islamic trans-Saharan and Indian Ocean slave trades between 650 and 1905.”

Slavery was only formally abolished in some Arab countries after the middle of the 20th century – in Qatar in 1952, and in Saudi Arabia and Yemen in 1962.

Mauritania outlawed it in 1980, although the practice is reported to persist. According to Humanists International’s latest Freedom of Thought Report, Mauritania today has “the world’s highest proportion of slaves, mostly the black Africans, in indenture that is socially justified with reference to Islam.”

According to the Global Slavery Index, modern-day slavery is most prevalent in North Korea, followed by countries in Africa (including Mauritania, Eritrea, Burundi, South Sudan, Sudan, and Central African Republic) and South Asia (including Afghanistan, Pakistan and Iran).