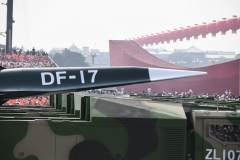 A purported Dongfeng-17 ballistic missile designed to operate with a DF-ZF hypersonic glide vehicle is rolled out during a military parade in Tiananmen Square in Beijing on October 1, 2019. (Photo by Greg Baker/AFP via Getty Images)

(CNSNews.com) – Reacting to weekend reports of China having tested a nuclear-capable hypersonic missile over the summer, a state media outlet stopped short of confirming them, but touted what it called “the unstoppable trend that China is narrowing the gap with the U.S. in some key military technologies.”

“If the FT report is to be believed, it means that there is a key new member in China’s nuclear deterrence system, which is a new blow to the U.S.’ mentality of strategic superiority over China,” opined Global Times, a mouthpiece of the Chinese Communist Party.

It was commenting on a Financial Times report citing unnamed sources as saying Beijing in August launched a missile that circled the globe in low orbit before returning to Earth and towards a target.

The report said although the projectile had missed its target “by about two dozen miles” the exercise had demonstrated “an advanced space capability that caught U.S. intelligence by surprise.”

“The test showed that China had made astounding progress on hypersonic weapons and was far more advanced than U.S. officials realized,” it said.

Hypersonic missiles fly at up to five times the speed of sound, or around 3,836 mph, and are capable of changing trajectories midflight, making them harder for current missile defense systems to counter by tracking and destroying them.

The Global Times editorial said China has no need to enter into an arms race with the United States as it is able to weaken the U.S. advantage by developing its military capabilities at its own pace.

The CCP paper alluded to tensions in the Taiwan Strait, where China has escalated its deployment of warplanes into skies near Taiwan, and the U.S. and allies have sent warships through the waterway in a show of support for the island democracy. It also referred to the South China Sea, where tensions periodically flare over China’s territorial and maritime claims and U.S. rights of free navigation.

China does not need to try to challenge U.S. military dominance globally, Global Times said, but would instead focus its buildup on the Taiwan Strait and South China Sea.

“It is inevitable that China will take an upper hand over the U.S. military strength in these areas thanks to the geographical proximity and the continuous increase of China’s input.”

It argued that no matter how much the U.S. pours into military spending it will not forever continue to “enjoy overwhelming military superiority in China’s coastal areas.”

People’s Liberation Army rocket scientists are proposing improving the target accuracy of hypersonic glide vehicles through the use of Artificial Intelligence to make adjustments to the projectiles’ software in flight, the South China Morning Post in Hong Kong reported last week.

The United States, Russia, and North Korea are all working on developing hypersonic missiles, with Russia leading the way.  (Pyongyang claimed last month to have test-fired such a weapon, named as Hwasong-8.)

President Vladimir Putin in a March 2018 speech announced an array of advanced new weaponry under development. He subsequently said that they included the Avangard, an intercontinental hypersonic glider capable of delivering nuclear or conventional payloads. A year ago the U.S. Air Force general responsible for missile defense, North American Aerospace Defense Command head Gen. Glen VanHerck, confirmed that the Avangard was now operational.

President Biden early this year agreed to extend by another five years the Obama-era New START arms control agreement with Moscow, which imposes limits on the number of strategic nuclear weapons the two nations are allowed to possess.

The new New START expiration date is 2026, and with that in mind, Biden and Putin at their summit in Geneva last June agreed to launch a dialogue to lay the groundwork for future arms control measures.

The Trump administration had earlier sought to expand New START into a three-way agreement, to include China. But the Chinese, whose growing nuclear arsenal is not covered by the 2010 treaty, has shown no interest in joining a treaty that would entail encumbrances on its programs.