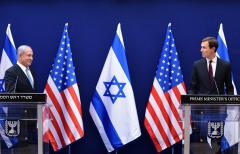 (Update:  As anticipated, the inaugural El Al flight from Tel Aviv to Abu Dhabi crossed Saudi airspace en route to the UAE. At a ceremony on landing in the Gulf state, Jared Kushner hailed the visit as a “historic breakthrough.”)

(CNSNews.com) – As they prepare to take the first commercial flight between Israel and the United Arab Emirates, White House senior adviser Jared Kushner and National Security Advisor Robert O’Brien both expressed optimism Sunday that other Arab countries would follow the UAE in normalizing relations with the Jewish state.

Israeli Prime Minister Binyamin Netanyahu, hosting them in Jerusalem, said President Trump’s approach to the Middle East has deprived the Palestinian leadership of the “veto” they effectively wielded over any progress in relations between Israel and the Arab world.

The roughly three-hour flight will need to cross Saudi airspace. Although the kingdom has yet to announce publicly that it has granted permission, that will in itself mark further erosion of the decades-long Arab boycott of Israel.

(Although Saudi Arabia has long prohibited planes flying to or from Israel from overflight, in a sign of softening in 2018 it gave permission for Air India to do so. That reduced by more two hours a New Delhi-Tel Aviv flight that would otherwise have had to skirt the Arabian peninsula then follow the Red Sea north to Israel.)

On Saturday, the UAE formally ended its boycott of Israel, rescinding with a decree a law put in place in 1972, months after the federation of seven emirates was created.

The Arab League first announced the boycott more than seven decades ago. Although observation is erratic, most Arab states still do not recognize Israel, together with a handful of non-Arab Islamic states, including Iran and Pakistan.

O’Brien and Kushner are due to take the inaugural El Al flight 971 to Abu Dhabi on Monday, along with other members of a U.S. delegation, accompanied by an Israeli government delegation led by O’Brien’s counterpart, Meir Ben-Shabbat.

The UAE state news agency WAM confirmed the visit of the Americans and Israelis traveling “on board the first Israeli commercial plane to land in the UAE.”

“This visit comes as part of trilateral efforts to initiate normalized relations with the aim of achieving peace, stability, and support for bilateral cooperation,” it said.

‘The circle of peace’

Speaking alongside Kushner and O’Brien, Netanyahu said the U.S.-Israel-UAE deal announced on August 13 had dealt a blow to the Palestinian “veto” – a reference to the position held by many Arab states that they will only recognize Israel once the Israeli-Palestinian conflict has been settled.

“Today’s breakthroughs will become tomorrow’s norms,” he said. “It will pave the way for other countries to normalize their ties with Israel.”

“Two things have changed that. The first thing is the Trump plan and the second thing is the willingness of Arab states, supported enormously by the United States of America, to advance peace without a Palestinian veto.”

Netanyahu said he has expressed willingness to negotiate a peace deal with the Palestinians on the basis of the Trump plan, which he described as “the first realistic initiative for an Israeli-Palestinian peace.”

“As more Arab and Muslim countries join the circle of peace, the Palestinians will eventually understand that their veto has dissipated, and they will be hard pressed to remain outside the community of peace.”

Kushner said Trump has been “writing a script for a new Middle East,” reversing “20 years of bad outcomes.”

Many had described the state of the Middle East as “hopeless,” but over the last few weeks he has “felt a new sense of optimism,” he said.

“And we must seize that optimism and we must continue to push to make this region achieve the potential that it truly has.”

O’Brien said the future for Israel and the entire region “has never been brighter.”

“We believe that other Arab and Muslim countries will soon follow the United Arab Emirates’ lead and normalize relations with Israel,” he said.

O’Brien laid out a series of administration policies which he portrayed as having changed the regional dynamics – recognition of Jerusalem as Israel’s capital; recognition of Israeli sovereignty over the Golan Heights; the conclusion that “the establishment of Israeli civilian settlements in the West Bank is not, per se, inconsistent with international law – notwithstanding what the United Nations claims”; the Trump peace vision; and his uncompromising approach towards the Iranian regime.