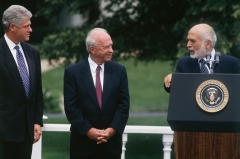 Prime MinisterYitzhak Rabin and Jordan's King Hussein with President Clinton at the White House in October 1994. (Photo by Jeffrey Markowitz/Sygma via Getty Images)

(CNSNews.com) – Rep. Alexandria Ocasio-Cortez’s decision to withdraw from an event marking the 25th anniversary of the assassination of Yitzhak Rabin drew criticism at the weekend, with the granddaughter of the slain Israeli prime minister accusing her of “populism,” and a pro-Israel Democratic organization calling the move disrespectful to Israel and to “peacemakers.”

Palestinian activists praised her, however, disputing the image of Rabin – a former army general and chief of staff who signed peace accords with both PLO chairman Yasser Arafat and Jordan’s King Hussein – as a peacemaker.

Americans for Peace Now, the dovish group organizing the Rabin event on October 20, announced Ocasio-Cortez’s participation on Thursday, inviting supporters to register to hear the left-wing New York congresswoman “reflect on fulfilling the courageous Israeli leader’s mission for peace and justice today in the U.S. and Israel.” The virtual memorial event is being hosted by the actor Mandy Patinkin.

But after a journalist drew her attention on Twitter to the very negative view many Palestinians hold of Rabin, Ocasio-Cortez tweeted, “this event and my involvement was presented to my team differently from how it’s now being promoted. Thanks for pointing it out. Taking a look into this now.”

Americans for Peace Now subsequently confirmed that Ocasio-Cortez had pulled out, expressing regret. “Her participation would have added to the event,” it said, but added it was certain it would still be a success.

“Due to This brave historical act he was assassinated,” she said in a tweet directed to Ocasio-Cortez. “But off course Populism is easier.”

“It is also offensive to those who support a two-state solution to the Israeli Palestinian conflict and, sadly, gives aid and comfort to the enemies of peace,” he said. “Fortunately, her fundamental disrespect for Israel and for peacemakers is not shared by the vast majority of Democrats in Congress or at the grassroots.”

Dan Shapiro, a former U.S. ambassador to Israel, tweeted of her decision, “A mistake to give in to pressure, a missed opportunity to speak constructively to both sides of this conflict, honoring a peacemaker while acknowledging complexity. Hope she will try again & do better.”

“This is the price you pay for coddling up to the Squad in the vain attempt for social media publicity,” he tweeted. “You get burnt.”

Ocasio-Cortez received plenty of praise on social media from pro-Palestinian voices, on the other hand.

“It’s official. AOC has withdrawn her participation from an event memorializing Yitzhak Rabin,” tweeted Adalah Justice Project, a U.S.-based Palestinian advocacy organization. “His legacy is one of violence and dispossession for Palestinians. Thank you AOC for listening to the lived experience of the Palestinian people.”

Rabin signed the Oslo interim accords with Arafat at the White House in 1993 and the following year the two shared the Nobel peace prize with then-Israeli Foreign Minister Shimon Peres, “for their efforts to create peace in the Middle East.” Also in 1994, Rabin and Jordan’s King Hussein signed a peace treaty, only the second ever between Israel and an Arab state.

Rabin was assassinated by an Israeli ultranationalist at a rally in Tel Aviv on November 4, 1995.

Orde Kittrie, a former State Department attorney and senior fellow at the Foundation for Defense of Democracies, recalled that King Hussein – “who understood what [Ocasio-Cortez] doesn’t” – had given a eulogy at Rabin’s funeral, despite the fact that Rabin led the Israeli Defense Forces at the time of Israel’s victory over Jordanian forces in the 1967 Six Day War.

Before Ocasio-Cortez’s decision to withdraw, the American Jewish Committee tweeted, “Yitzhak Rabin devoted his life to the defense of his country. When he saw the chance for peace he became, as he said in his address to Congress in 1994, ‘a soldier in the army of peace.’ He died for peace. Any member of Congress should be honored to be associated with his memory.”

Rabin’s detractors focus not on his quest for peace with the Arabs later in his life but on his long military career, including his role as defense minister during the first Palestinian uprising which erupted in 1987. He would later be accused of ordering soldiers to break the bones of violent protestors, an accusation that dogged him for the rest of his life. Rabin himself denied the charge, saying he had encouraged soldiers to beat rioters rather than resort to gunfire, but had never given orders to break bones.

Known as “Mr. Security,” he was seen by part of the Israeli political spectrum as one political leader they could trust to secure a meaningful peace with a Palestinian movement led by an unrepentant terrorist.