After Griner Swap, Which Russians in US Prisons Could Provide Leverage to Get Whelan Home? 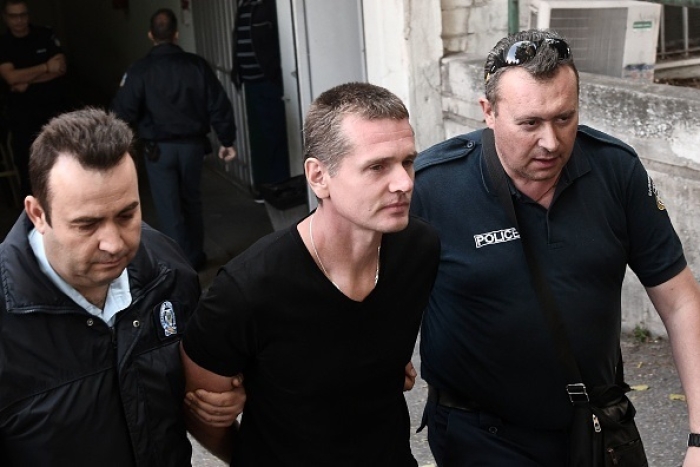 Russian citizen Alexander Vinnik is escorted by Greek police officers to a courthouse in Thessaloniki in 2017. Vinnik was extradited to the U.S. over the summer and is facing trial in San Francisco on charges relating to cybercrime money laundering. (Photo by Sakis Mitrolidis / AFP via Getty Images)

(CNSNews.com) – As the White House defends a prisoner swap with Russia that brought home WNBA star Brittney Griner but left behind a former U.S. Marine convicted of espionage, attention turns to other imprisoned Russians who may provide the U.S. with the necessary leverage to win freedom for Paul Whelan.

The TASS news agency quoted Russian Ambassador to the U.S. Anatoly Antonov as pledging Thursday to “continue our energetic work to release all Russians jailed in the United States, and we will not rest until all our compatriots return back home.”

A year-old tweet by the Russian Embassy in Washington provides a clue to one of those on Moscow’s radar.

After the State Department in statement last December marked the third anniversary of Whelan’s detention, the embassy responded with a tweet claiming that Whelan had been “arrested while committing serious crimes” in contrast to Russians who had often detained convicted “under far-fetched pretext.” The tweet ended with three hashtags: #FreeYaroshenko #FreeBout #FreeSeleznyov

Viktor Bout is the notorious arms dealer exchanged on Tuesday for Griner.

Konstantin Yaroshenko is a pilot who was sentenced in 2011 to 20 years’ imprisonment after being convicted of conspiring to smuggle cocaine into the United States. He was freed in April in exchange for another former U.S. Marine held in Russia, Trevor Reed. Reed had been jailed since 2019 after being accused of assaulting a Russian police officer while drunk and sentenced to a nine-year prison term. He denied the charges and the U.S. said the trial had been a sham.

The third hashtag, #FreeSeleznyov, relates to Roman Seleznev (Seleznyov is an alternative spelling), a Russian hacker sentenced in 2017 to 27 years’ imprisonment for hacking and credit card fraud, and then again later that same year to 14 years’ imprisonment in a separate cyber fraud case. The sentences run concurrently.

In all three cases – Bout, Yaroshenko, and Seleznev – the Russian government said its citizens had effectively been kidnapped by the United States.

Bout and Yaroshenko were caught in DEA sting operations, in Thailand in 2008 and Liberia and 2010 respectively, before being extradited to the U.S. to face trial. Foreign Minister Sergei Lavrov complained to then-Secretary of State John Kerry in 2016 that both had been entrapped by U.S. agents.

Seleznev was arrested in the Maldives in 2014, transferred to Guam, and then flown to the U.S. for trial. In his case, too, Russia claimed the arrest was a de-facto “kidnapping.”

Seleznev is the son of a former member of the State Duma for the ultranationalist Liberal Democratic Party. His father claimed at the time that the U.S. had arrested him for leverage in a bid to secure Edward Snowden, the former NSA contractor granted asylum by President Vladimir Putin in 2013 after he exposed U.S. surveillance operations around the world.

Russian officials, including Ambassador Antonov, have regularly cited Seleznev when speaking of the attempts to get Russians jailed in the U.S. home.

On Thursday, hours before the Bout-Griner swap was announced, Deputy Foreign Minister Sergey Ryabkov in an interview with Izvestia mentioned in the context of prisoner exchange negotiations Bout, Seleznev, and a third Russian, Alexander Vinnik.

Vinnik was arrested in Greece in 2017 on suspicion of cybercrime money laundering and extradited last August to the U.S., where he faces trial in San Francisco. Before being extradited from Europe, he was sentenced by a French court in 2020 to five years’ imprisonment for money laundering.

One other name of a Russian imprisoned abroad on serious charges has come up in connection with a possible swap, but in his case the prisoner is serving time in Germany, not the United States.

Vadim Krasikov, allegedly a Russian intelligence agent, was sentenced a year ago to life imprisonment for murdering an exiled Chechen-Georgian near a Berlin park in 2019.

Prosecutors said the execution-style killing of former rebel commander Zelimkhan Khangoshvili was ordered by Moscow. Although the Kremlin denied any link to the incident, the German government pointedly expelled two Russian diplomats.

CNN reported last August that Russian officials had asked that Krasikov be included in a U.S. exchange proposal for the release of Griner and Whelan.

Secretary of State Antony Blinken said on Thursday that despite U.S. efforts to secure Whelan’s release, the Russians “continue to insist on sham charges of espionage and are treating Paul’s case differently.”

“We continue to work relentlessly to bring Paul Whelan home,” he said at the State Department, speaking alongside his Finnish and Swedish counterparts.

“We continue to work with the Whelan family who’ve been extraordinarily gracious, and we hold them in our thoughts and prayers always, but especially today,” Blinken said.

“And we will never relent until Paul – and for that matter, every other U.S. national held hostage or wrongfully detained abroad – is free and coming home and joining their families, where they belong.”