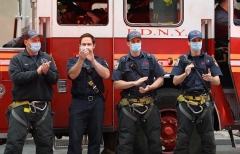 (CNSNews.com) – As April moves into May, the United States continues to have the second-lowest fatality rate out of the ten countries reporting the highest numbers of COVID-19 deaths.

At the same time, of those ten countries reporting the highest numbers of deaths, the United States remains near the lower end of the scale of deaths in proportion to the national population.

(Iranian opposition activists claim the real number of deaths in Iran exceeds 37,000, which if true would place its death toll second only to that of the United States. Officially, Iran is reporting 6,028 deaths.)

The case-fatality rate is the number of COVID-19 deaths divided by the number of confirmed cases of the disease caused by the coronavirus that emerged in Wuhan, China late last year.

Of those ten countries with the largest numbers of deaths, only Germany has a lower case-fatality rate than the United States. Germany’s is 4.06 percent, while the rate in the U.S. is 5.89 percent.

The case-fatality rates for the ten countries, in descending order, are:

When the death tolls in the ten countries are viewed as a proportion of the countries’ national populations, the United States lies in seventh place of the ten, ahead of Iran, Brazil and Germany, and behind Belgium, Spain, Italy, Britain, France, and the Netherlands.

The per-capita rates for the ten countries, in descending order, are:

Speaking at the White House on Thursday, President Trump made a reference to the case-fatality rate.

“Through our aggressive actions and the devotion of our doctors and nurses, however, we have held our fatality rate far below hard-hit other countries, such as Spain and Italy and United Kingdom and Sweden.”

Sweden, which has drawn attention for putting only mild restrictions in place during the pandemic compared to most other countries, has reported 2,586 deaths and 21,092 confirmed COVID-19 cases as of early Friday.

In the lists above, that would put Sweden one place above the United States in per capita deaths (0.0253) and between Italy and the Netherlands among the case-fatality rates (12.26 percent).

The numbers of confirmed cases and deaths cited above are from the real-time database of the Center for Systems Science and Engineering at Johns Hopkins University. Per capita rates are based on national populations from the CIA World Fact Book.