Farmers take part in a blockade of the A67 near Eindhoven to protest against government plans that may require them to use less fertilizer and reduce livestock at Hapert, on July 4, 2022. (Photo by ROB ENGELAAR/ANP/AFP via Getty Images)

(CNSNews.com) – In response to the government’s newly announced National Program to Reduce Pollutant Emissions, Dutch farmers from across the Netherlands drove their tractors in protest of these agricultural limitations.

On June 10, the Dutch Minister for Nitrogen and Nature Policy, Ms. Christianne van der Wal, laid forth the country’s plan to reduce its nitrogen emissions. The plan calls upon each Dutch Province to implement emission reduction measures to reduce nitrogen emissions between 12 and 70 percent, depending on the area.

The map below outlines the reduction expectations for each are: 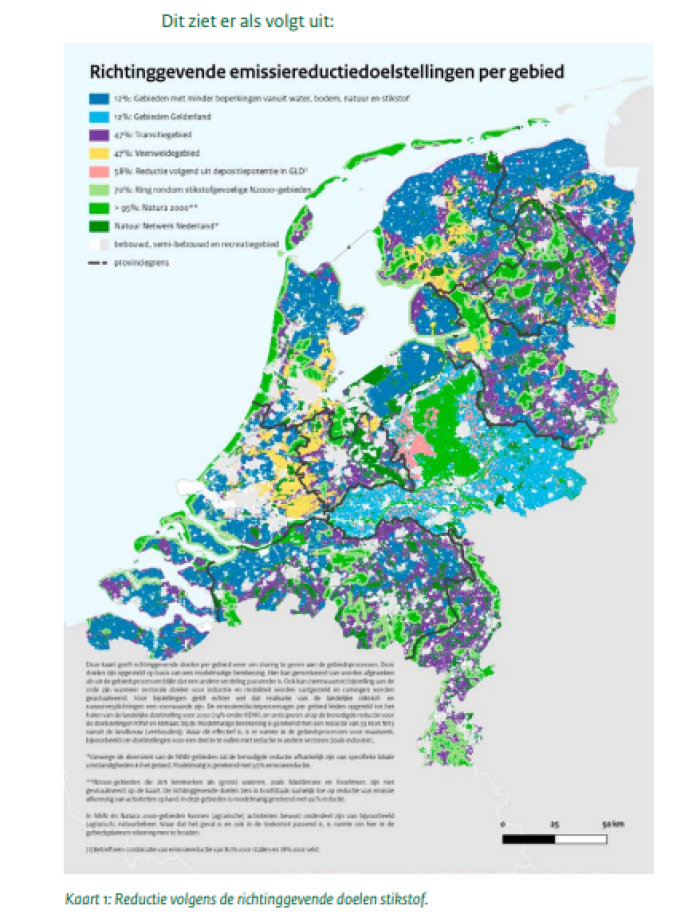 Each of the 12 Dutch provinces have one year to come up with a strategy. To reach the country’s 2030 climate goal of cutting emissions by 40 percent, it is estimated that farmers will need to have around a 30 percent reduction in the total number of cattle.

Studies conducted by the National Library of Medicine have found the urine and feces of livestock to be “major sources of ammonia and nitrous oxide emissions.

The frequency and methods of agriculture, which involves a large amount of livestock kept on small patches of land, makes the Netherlands a top emitter of pollutants in Europe.

This plan comes after the highest administrative court in the Netherlands ruled in 2019 that the country was not taking enough action to protect its natural areas. A series of court rulings blocked infrastructure and construction projects due to fears of emissions that would violate environmental regulations forced Dutch lawmakers to take action.

The national plan, which is officially titled “Starting Memorandum National Program for Rural Areas,” will have its biggest impact on the agricultural sector in particular. “There is not a future for all {Dutch} farmers within {this} approach,” the government admitted.

The National Program “will have an enormous impact on farmers,” according to Mark Rutte, who has served as the Dutch Prime Minister since 2010. “This sector will change, but unfortunately there’s no choice, we have to bring down nitrogen emissions,” the Prime Minister proclaimed.

Since the announcement, protests have broken out across the Netherlands, with around 40,000 farmers gathering to block traffic throughout the country, according to ABC.

Some demonstrators have resorted to dumping hay bales or parking tractors in the road as a means of blocking traffic. Fishermen, in a show of solidarity with the farmers, blockaded ports with their ships. Another group of protestors left a pile of manure on the street near the home of Christianne van der Wal.

“I was asked to come here and provide breakfast so we can show we are food producers, not pollution producers,” dairy farmer Jaap Zegwaard told Al Jazeera. Zegwaard had joined other farmers, many of whom sported shirts that read “no farmers, no food,” to go to the Hague to protest the newly announced national program.

“Several highways are currently blocked by farmers. You don’t make your point by endangering road users. This can have serious consequences. Then the police have no choice but to intervene where possible, if necessary afterwards. Don’t let it get that far.”