Rabbi Menken: ‘Less Than a Century Ago, These People Called Themselves Nazis; Today They Are Called “The Squad”’ 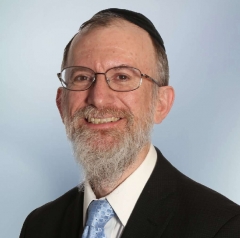 (CNS News) -- Democratic members of "The Squad" reportedly lobbied behind the scenes on Tuesday to kill $1 billion in renewed funding for Israel's Iron Dome interceptors, a step that could only be supported by "those who want more Jews to die," said Rabbi Yaakov Menken, managing director of the Coalition for Jewish Values (CJV).

"Less than a century ago, these people called themselves #Nazis; today they are called 'The Squad,'" tweeted Rabbi Menken on Sept. 22.

The Democrat-dominant House of Representatives voted on Tuesday along party lines, 220-211, to pass legislation to keep the federal government funded through December 3 of this year and to lift the debt ceiling through December 2022.

Included in that 94-page bill, a continuing resolution, was $1 billion in renewed funding to restock Israel's Iron Dome defensive missile system. The Iron Dome interceptors are able to knock incoming rockets (bombs) out, in the sky, before they hit their targets.

Much as Rep. Hernandez should be saluted for her strong support, #IronDome is 100% defensive, & the only people who would oppose funding it are those who want more Jews to die. Less than a century ago, these people called themselves #Nazis; today they are called "The Squad." https://t.co/12oMvZ4VAJ

The system is a defensive weapon and has been used countless times to neutralize rockets fired into Israel by the terrorist group Hamas.

Although Republicans and many Democrats support funding the system, in the latest negotiations members of "The Squad" reportedly threatened to vote against the entire legislation unless the Iron Dome funding was removed.

"Congresswomen Rashida Tlaib, Ilhan Omar, Ayanna Pressley and Pramila Jayapal also threatened to vote against the bill if the Iron Dome funding was included, a Congressional aide said," according to The Times.

CNS News also reported on the funding threats on Wednesday. After the legislation passed, leading Democrats, such as Majority Leader Steny Hoyer (D-Md.), said that the Iron Dome would be funded in a separate bill.

When word spread that The Squad had killed the Iron Dome funding, many lawmakers tweeted their frustrations. For instance, Rep. Alma Hernandez, a Democrat in the Arizona House of Representatives, tweeted,

"Ok ppl need to understand that this was all a stunt we are NOT defunding the #IronDome the squad does NOT speak on behalf of our party. Yes I’m pissed off absolutely at the end we win. I’m sick and tired of the political games with our community. Keep your hands off the #IronDome."

In response to that Tweet, Rabbi Menken tweeted, "Much as Rep. Hernandez should be saluted for her strong support, #IronDome is 100% defensive, & the only people who would oppose funding it are those who want more Jews to die. Less than a century ago, these people called themselves #Nazis; today they are called 'The Squad.'"

At least six million Jews were killed by the Nazis during the late 1930s and throughout World War II. Since 1948, Israel has experienced nine wars (and other major conflicts) against Arab states and/or terrorist groups, such as Hamas.

Drawing attention to the apartheid Israeli regime is far from hating Jews. You are a hateful sad man, I pray to Allah you get the help you need and find happiness. https://t.co/SvEXjlxlEN

Hamas and armed Palestinian groups have been launching missile attacks against Israel for decades. In May of this year alone, there were thousands of rocket attacks aimed at Jewish civilians.

As Human Rights Watch has reported, "Of the more than 4,360 rocket and mortar attacks [in May] by Palestinian armed groups, 3,573 'penetrated Israeli airspace,' according to Israeli authorities. Israeli authorities said that their aerial defense system, known as Iron Dome, intercepted about 90 percent of the rocket attacks."