Palestinian Deaths Since May 10: 232, Chicago Homicides This Year: 210 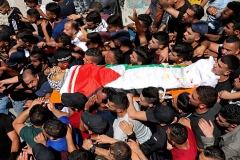 (CNS News) -- Since the violence erupted in Israel on May 10, a reported 232 Palestinians and 10 Israelis have been killed, a total of 242 victims. These people were killed primarily by airstrikes (bombing) and rocket attacks. It's essentially a war zone there.

For comparison, since Jan. 1 through May 10, at least 210 people have been killed in Chicago, most of them by gun violence. The majority of the victims are young black men, according to the Chicago Tribune.

Including the 210 people killed in Chicago, at least 1,187 have been shot since Jan. 1, reported the Chicago Sun-Times.