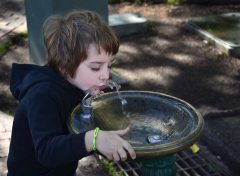 (CNSNews.com) -- On April 22, the 50th anniversary of Earth Day, Gallup released data from a survey showing that in 2019, nearly two-thirds (63%) of the adults in 145 countries "said they were satisfied with their country's efforts to preserve the environment."

However, some of the responses "ranged widely from a low of 10% in Lebanon to a high of 93% in the United Arab Emirates," said the survey firm.

Gallup asked, for instance, "In this country, are you satisfied or dissatisfied with efforts to preserve the environment?"

Fifty-six percent in the United States said they were "dissatisfied."

"Nearly three in four adults (73%) worldwide in 2019 said they were satisfied with the quality of water where they live, but this ranged widely from a low of 32% in Gabon to 98% in Singapore," said Gallup.

When asked if they were satisfied with the quality of water where they lived, 89% of Saudis said satisfied, 88% of German adults, and 83% of U.S. adults.

In the U.S.A., only 17% of adults said they were dissatisfied withe the quality of the water.

When it came to the quality of the air, "[m]ore than three in four (78%) worldwide in 2019 said they were satisfied with the quality of air where they live," reported the survey firm.