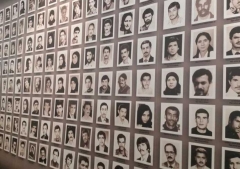 Photos of some of the victims of the 1988 Iranian Massacre. (Screenshot, Iran International)

(CNS News) -- On May 3, more than 150 former U.N. officials, human rights activists, and legal experts sent an open letter to the U.N. High Commissioner for Human Rights requesting that a "Commission of Inquiry into the 1988 mass extrajudicial executions and forced disappearances" in Iran be established.

The letter notes that the 1988 killings of thousands of political prisoners across Iran, mostly of supporters of the People's Mujahedin of Iran, may have constituted "crimes against humanity."

Family members of the victims and survivors are today the “subject of persistent threats, harassment, intimidation and attacks because of their attempts to seek information on the fate and whereabouts of the individuals and their demands for justice," according to the letter.

“There is a systemic impunity enjoyed by those who ordered and carried out the extrajudicial executions," reads the letter. “Many of the officials involved continue to hold positions of power including in key judicial, prosecutorial and government bodies.”

According to the organization "Justice for Victims of 1988 Massacre in Iran" (JVMI), at "the end of July 1988, [Ayatollah] Khomeini issued a fatwa ordering the massacre of political prisoners. Death Commissions were formed in more than 70 cities."

"It is estimated that as many as 30,000 political prisoners, primarily affiliated to the opposition PMOI (MEK), were summarily executed during Iran’s 1988 massacre alone," said the JVMI. "Some sources have reported that the figure may have been as high as 34,000."

The U.N.'s unwillingness to act on these crimes for so long has “had a devastating impact on the survivors and families,” reads the letter, and “emboldened” Iranian authorities to “conceal the fate of the victims and to maintain a strategy of deflection and denial.”

Map showing some of the reported mass graves in Iran from the 1988 massacre. (Screenshot, JVMI)

"We appeal to the U.N. Human Rights Council to end the culture of impunity that exists in Iran by establishing a Commission of Inquiry into the 1988 mass extrajudicial executions and forced disappearances," the letter concludes. "We urge High Commissioner Michelle Bachelet to support the establishment of such a Commission."

Some of the signatories to the letter include,

-- Prof. Manfred Nowak – Former U.N. Special Rapporteur on Torture and other Cruel, Inhuman or Degrading Treatment (2004-2010), former member of the UN Working Group on Enforced or Involuntary Disappearances (WGEID), and former judge at the Human Rights Chamber for Bosnia and Herzegovina – (Austria)

-- Hon. Michael Kirby – Former Chair of the U.N. Commission of Inquiry on Human Rights Violations in North Korea (DPRK), former U.N. Special Rapporteur on the Situation of Human Rights in Cambodia (1993-1996), former Justice of the High Court of Australia – (Australia)

Image from JVMI report, "The 1988 Massacre in Iran, Evidence of a Crime Against Humanity."