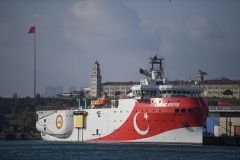 Berlin (CNSNews.com) – Turkey’s resumption of gas exploration in contested Mediterranean waters has sparked criticism from Greece, which is calling for European Union sanctions, and also from Germany, which has been trying to mediate between the two NATO members.

Prospects for resuming dialogue, and an E.U. bid at improving ties, were put in question on Tuesday after Turkey announced its resumption of gas exploration and redeployed its research vessel, Oruc Reis, accompanied by two navy frigates.  Turkey and Greece have long disputed claims over rights to natural gas reserves and maritime boundaries in eastern Mediterranean.

“We offered Turkey a very clear choice at the recent [E.U.] summit: A renewed partnership or consequences in the event that aggressive behavior continues,” Greek Prime Minister Kyriakos Mitsotakis said Wednesday, during a visit by German Foreign Minister Heiko Maas.

“Unfortunately, it seems that Ankara is choosing the path that leads to sanctions,” Mitsotakis said. “Obviously, we will not talk under these circumstances.”

Maas also appealed to Turkey to refrain from resuming seismic exploration in order to keep dialogue on the table, saying this was not the first time “Turkish provocations” have stymied progress.

Renewed Turkish gas explorations would result in a “severe setback” for E.U.-Turkey relations, he warned.

After months of tension, and calls by Greece and Cyprus to impose sanctions against Turkey over the issue, the E.U. opted at an October 2 summit to pursue a “positive agenda” rather than punitive measures.

The E.U. has been reluctant to impose sanctions against NATO member Turkey, which is a major trading partner and also has a 2016 agreement with the E.U. designed to curb migrant flows into Europe.

Instead, the E.U. pledged at the summit to move ahead with modernizing its customs union with Turkey, and strengthening the 2016 migration agreement. German Chancellor Angela Merkel also referred to the possibility of easing visa restrictions for Turkish citizens, a long-held Turkish demand.

At the same time the E.U. did warn that it was ready to “defend its interests” should Ankara take any unilateral actions in breach of international law.

Turkey after the summit reaffirmed its readiness to engage in dialogue with Greece, but also complained that the E.U.’s stance “lacked elements that lay the groundwork for dialogue and cooperation and help overcome problems.”

President Recep Tayyip Erdogan on Wednesday defended Turkey’s actions in redeploying the survey vessel, accusing Greece and Cyprus of failing to fulfil “promises,” but without elaborating.

Meanwhile the Trump administration has also weighed in, siding against Turkey in the spat.

“The United States deplores Turkey’s October 11 announcement of renewed Turkish survey activity in areas over which Greece asserts jurisdiction in the Eastern Mediterranean,” said State Department spokeswoman Morgan Ortagus in a statement. “Turkey’s announcement unilaterally raises tensions in the region and deliberately complicates the resumption of crucial exploratory talks between our NATO allies Greece and Turkey.”

“Coercion, threats, intimidation, and military activity will not resolve tensions in the Eastern Mediterranean,” Ortagus said. “We urge Turkey to end this calculated provocation and immediately begin exploratory talks with Greece. Unilateral actions cannot build trust and will not produce enduring solutions.”

Aykan Erdemir, senior director of the Turkey program at the Washington-based Foundation for Defense of Democracies, said Turkey’s latest steps may force the E.U.’s hand.

“Despite a vast majority of member-states working hard to avoid taking punitive action against Ankara during the last round of the standoff, the resumption of Turkey’s hydrocarbon exploration in waters claimed by Greece may force the E.U. to impose sanctions,” he said.

“Overall, this appears to be yet another episode of Erdogan’s brinkmanship as he continues to dare the European Union into taking action, being acutely aware that diplomatic tensions help boost his popularity at home,” added Erdemir, a former member of the Turkish parliament.

He noted that in September, Erdogan’s approval ratings rose from 48 percent to 52 percent, in part due to the eastern Mediterranean issue.

“Since positive effects of foreign policy stunts only last for a short time, the Turkish president is desperate to create new crises on multiple fronts.”