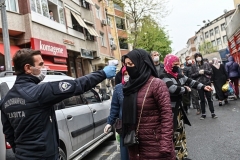 Berlin (CNSNews.com) – As the number of confirmed coronavirus cases in Turkey approaches 100,000 – overtaking numbers reported in China and Iran – the country’s modest death rate despite the limited use of lockdowns has raised speculation of possible underreporting.

Turkey has the seventh-highest number of confirmed COVID-19 cases in the world, but as of early Thursday its fatality rate – 98,674 cases, 2,376 deaths – stands at just 2.4 percent.

Adding to the suspicious about the accuracy of the official reporting are indications of apparent attempts at government censorship.

The Interior Ministry announced on Tuesday that 229 people have been detained for sharing “unfounded and provocative social media messages about the coronavirus.”

Among them, Fatih Portakal, an anchor at Turkey’s Fox TV, was arrested and accused of “spreading lies and manipulating the public on social media” – after he criticized the government’s plan to raise funds through public donations to fight the coronavirus crisis.

“We have given all the information transparently to the World Health Organization, as it wants, and we continue to do so,” Health Minister Fahrettin Koca said Wednesday. “The data proves the efficiency of our efforts.”

Since emerging in China late last year, COVID-19 has spread to at least 185 countries, with the United States and countries in Europe being the worst-hit.

While Turkey closed schools in March, as similarly-affected European states have done, it has been more hesitant to impose comparable lockdown measures, instead only ordering 48-hour weekend lockdowns over the past two weeks.

brahim Kalin, spokesperson for President Recep Tayyip Erdogan, told Turkish broadcaster NTV that committing to longer lockdowns would be too heavy a burden on the economy.

“Even now, with a huge surge in reported cases, Turkey is responding in a very limited way – weekend shutdowns being likely insufficient and equivalent to placing one’s thumb on the hull of a pockmarked ship that is leaking badly,” he said. “A city as large and densely populated as Istanbul is at particular risk.”

Romano pointed to the recent New York Times report, comparing death rates in Istanbul for the past two months to the same period in the last two years.

The figures, he noted, “seem to indicate an unexplained spike in mortality in the city,” a situation that would remain unexplained “as long as the media in Turkey is not allowed to contradict the government line.”

Like the Times, Aytun Ciray, a Turkish opposition lawmaker, said he had also compared Istanbul’s mortality figures in 2020 and 2019 and found that, after accounting for reported coronavirus-related deaths, there remained 2,607 more deaths this year than last.

Ciray said he also believed that the Ankara and Izmir provinces’ data on COVID-19 deaths have not been processed by the government yet.

Also drawing critical scrutiny is the effectiveness of measures taken so far.

Turkey banned the commercial sale of medical masks, requiring instead the use of masks freely provided by the Health Ministry. However, the Istanbul Medical Chamber says mask distribution so far has been “inconsistent and insufficient.”

Erdogan’s government pushed through a bill to release a third of all prisoners from Turkey’s jails, in a bid to prevent infections in crowded prisons. But political and human rights activists and journalists jailed under Turkey’s broad-reaching terrorism laws have not been released.

“For Erdogan, opposition media are even worse than a virus,” said Reporters Without Borders representative Erol Onderoglu.

An April survey by pollster Istanbul Ekonomi Arastirma found that a total of 62.2 percent of surveyed Turkish citizens did not trust the coronavirus data provided by the health ministry.

It also said Erdogan’s ruling Justice and Development Party’s support has dropped by seven points, down to 35.8 percent, since the June 2018 general elections.